Day 5: Twelve hours of driving, a switcheroo, and proof of Iowa's beauty!!

So, Day 5 (Friday) was always going to be the longest day.  We were leaving Omaha, NE and the endpoint was just west of Cleveland, OH.  Yeah, that's twelve solid hours of driving.  The longest driving day of the entire trip.  I did plan a couple of stops along the way to which I was looking forward, but nothing like Antelope Canyon or Mesa Verde National Park.

I was so sick of driving.  Fortunately, my mom volunteered to drive across most of Thursday and the first few hours on Friday.  I was so grateful to take a break from that!!

Our first stop of the day was approximately 2.5 hours from Omaha in Des Moines, IA to see one of my very best friends in the whole world.  This was an especially fun stop because not only did I get to see Layne, but Maggie also got to meet Layne's playful yellow labrador.  It was a wonderful visit, but too soon it was time to hit the road again because we still had a long ways to go.
After another two hours of driving, we arrived at our second stop of the day.  I know, I know....if we keep stopping like this, we'll never make it all the way to Cleveland.  However, this was a very important stop. 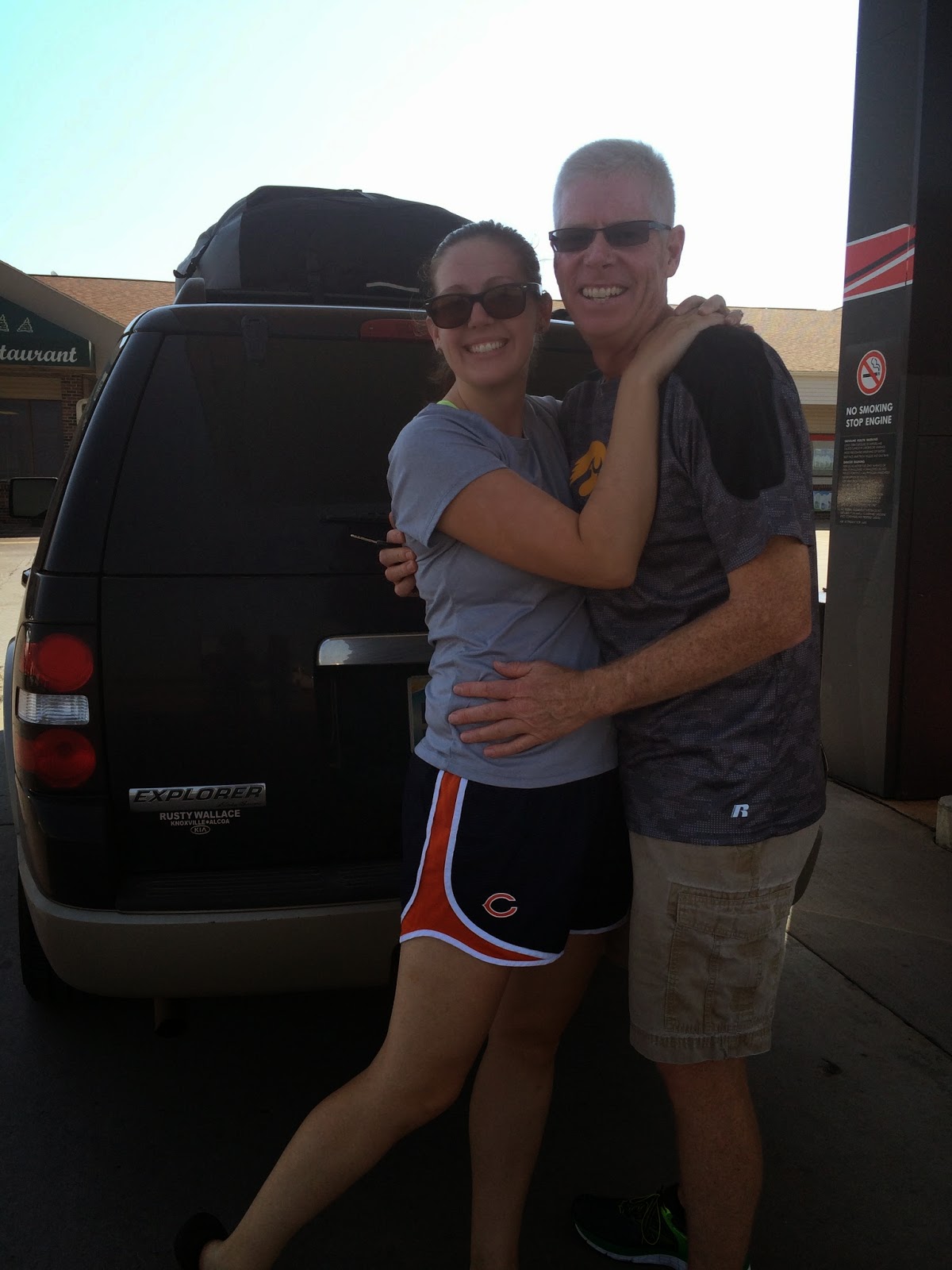 It was time for a little travel companion switcheroo:  my mom needed to head back to Ottumwa =( and my dad would be joining me for the rest of the trip!  I really wish that both my parents could have been on the entire trip, but there was definitely not room in the car for all three of us plus Maggie.  In addition, this way they both didn't take tons of time off from work. 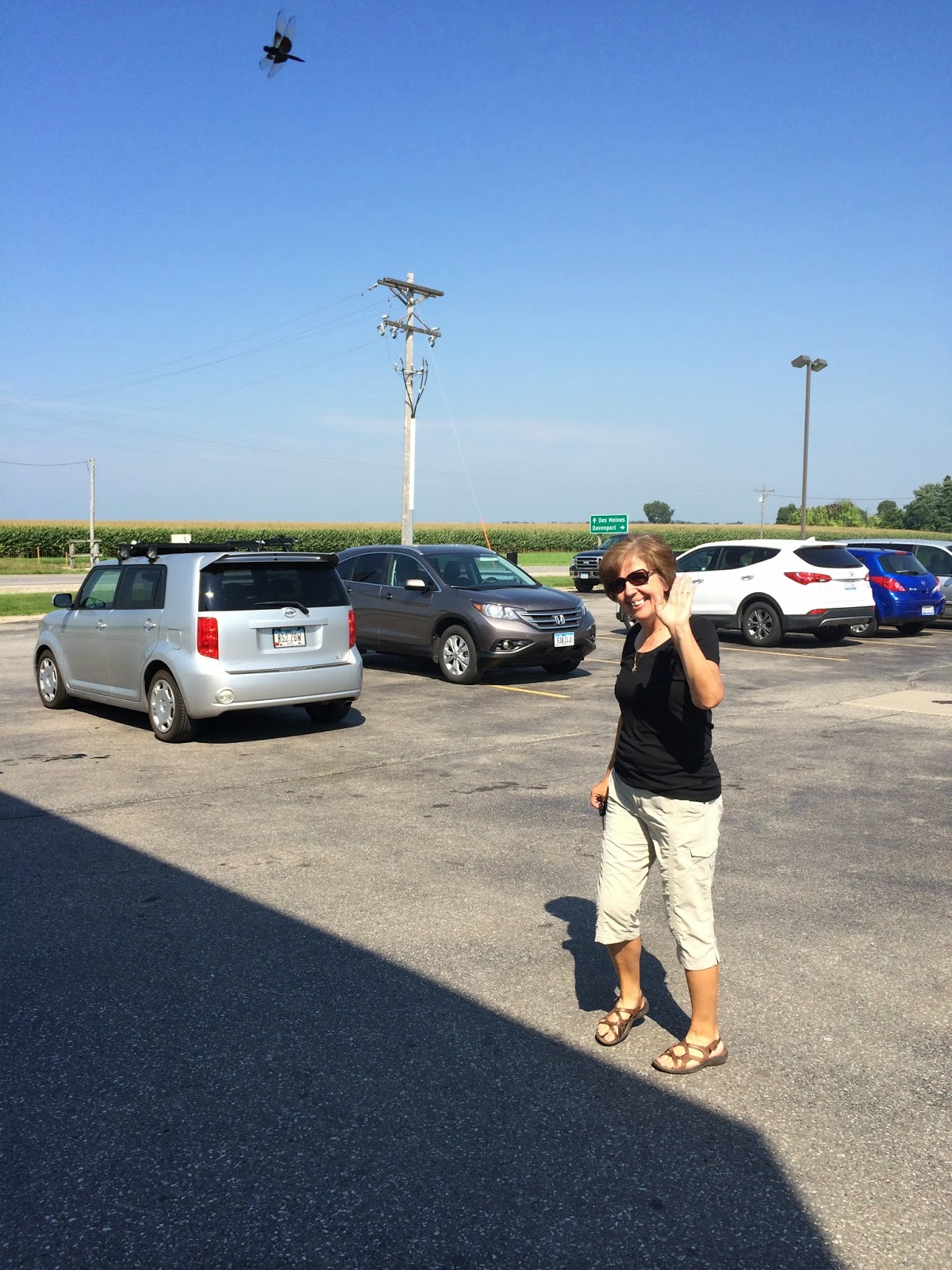 After my mom hit the road, my dad and I were off.  He's my hero because he drove the whole way from the switching point to Cleveland (approximately 8.5 hours).  I'm especially grateful because this wasn't exactly a fun day of hiking and sightseeing like the first few my mom and I had.  And, there wasn't an exciting end point with family and an adorable 2 year old.  In fact, there was only one "tourist site" at which I planned to stop on Friday, the Herbert Hoover National Historic Site in West Branch, Iowa, the birthplace of the only president born in Iowa.

I'd visited here a looooong time ago when I was in either 5th or 6th Grade, but when I read that you were allowed to walk dogs around the site, I knew this would be the perfect stop to get Maggie out so she could stretch her legs (me too).  The site consists of a replica town that gives a sense of what West Branch, Iowa was like at the time that President Hoover was born, including a blacksmith shop similar to the one his father owned, a schoolhouse, and the cottage in which he was born.
As part of the National Historic Site, the National Park Service reconstructed 76 acres of tallgrass prairie, which used to cover the state of Iowa before it was covered in corn and soybean fields. 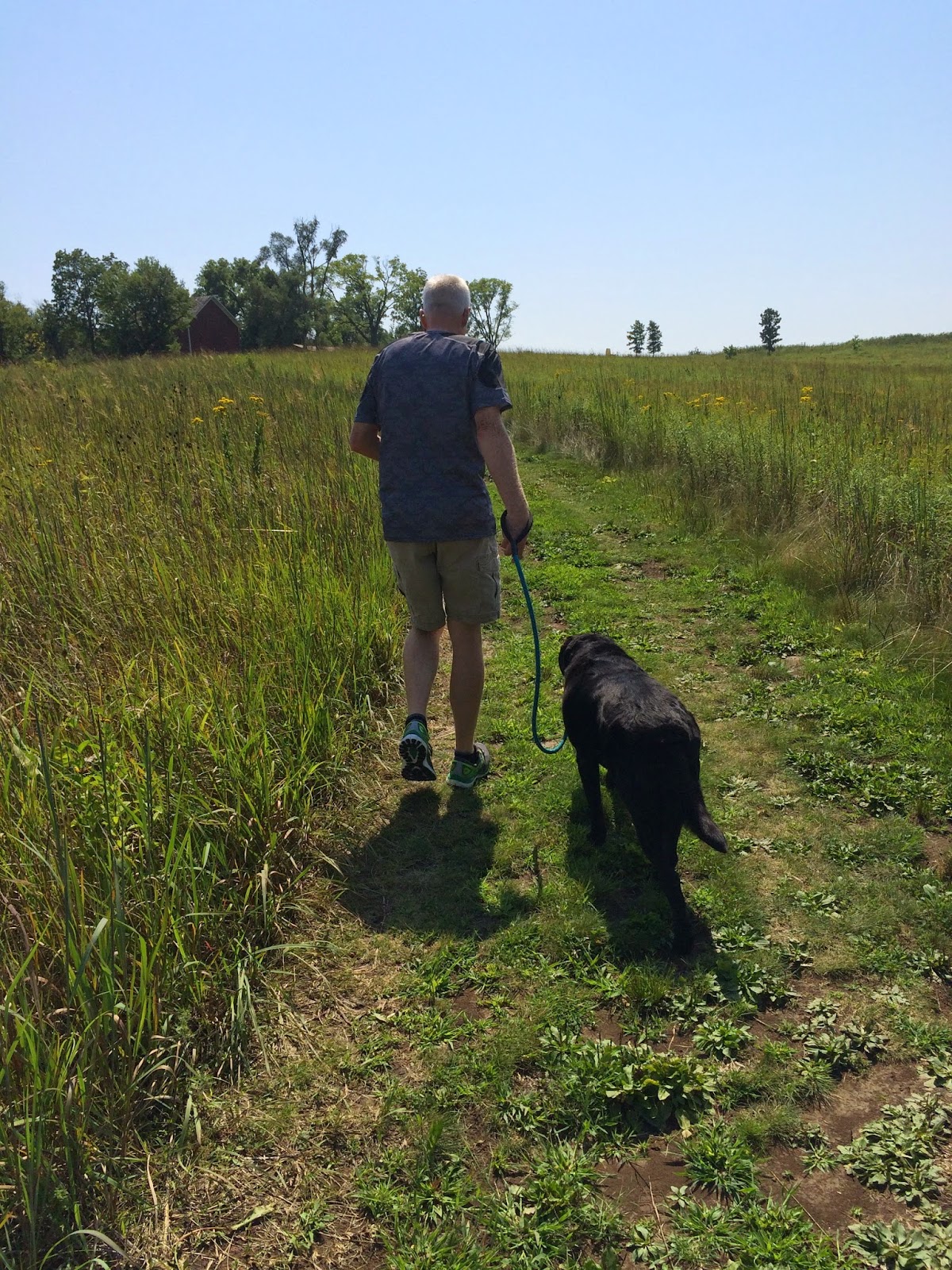 There are also trails that wander through the prairie grass on which dogs are allowed, so we walked a bit further.  I really enjoyed soaking up the sunlight and remembering/enjoying the beauty of the state in which I born and raised. 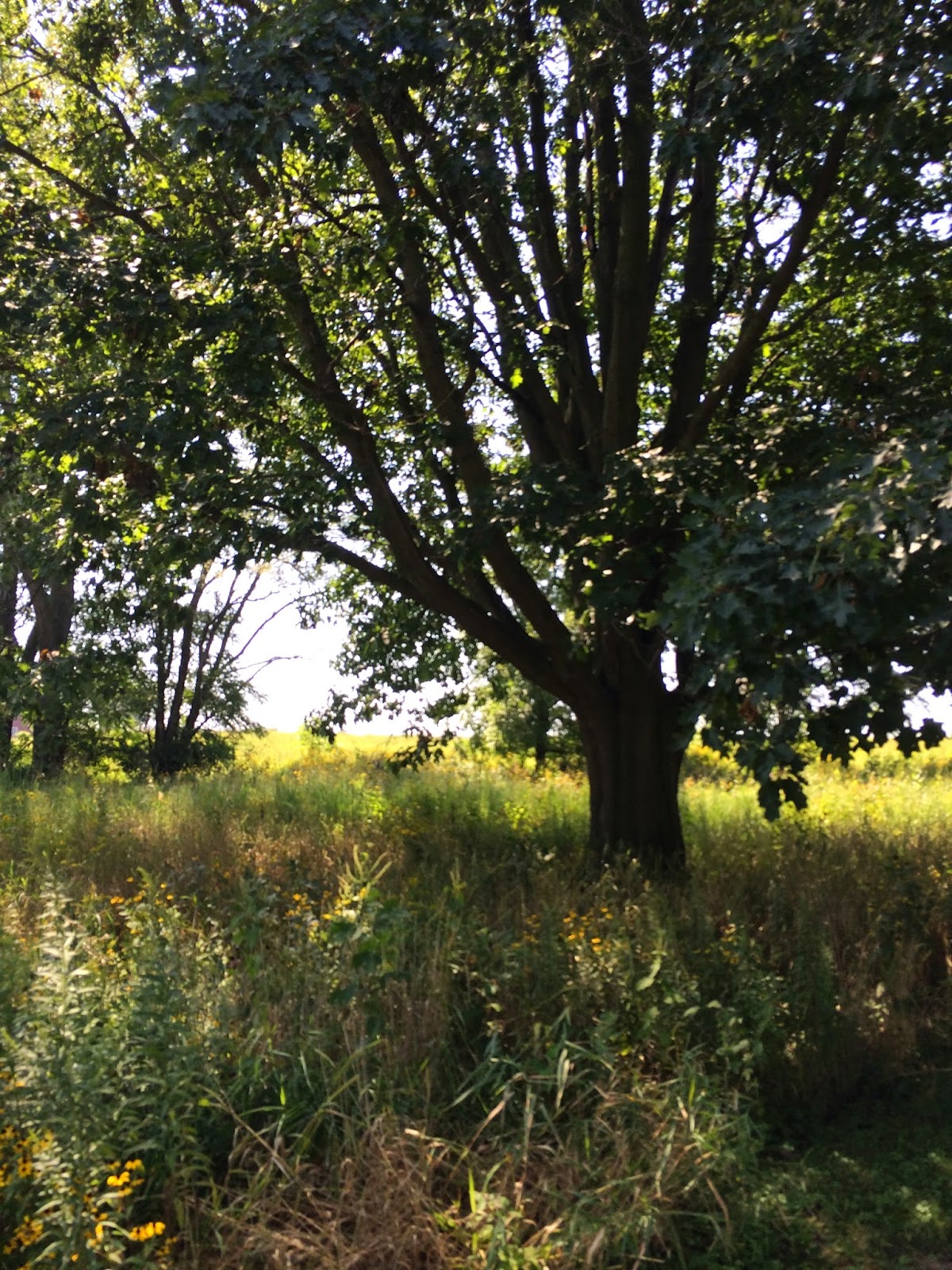 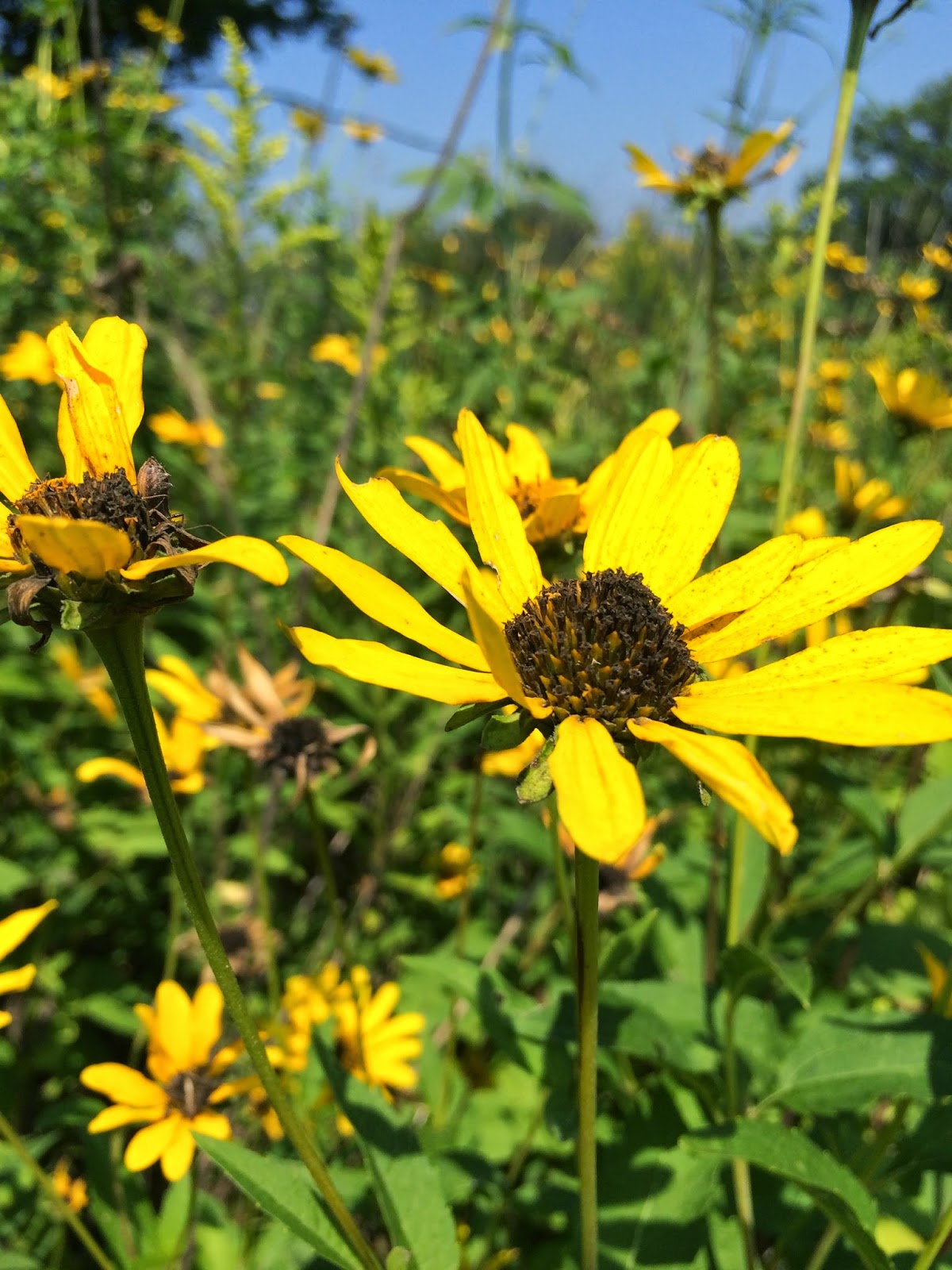 Other than the stop at the Hoover Historical Site, there really isn't that much to relay about Day 5 of the road trip.  Just a lot of driving and some bad traffic around Chicago (surprise, surprise).

We did drive by the World's Largest Truckstop, which is located on I-80 in Iowa, east of West Branch.  This really isn't anything of note to those of you in Iowa reading this, but maybe some of the non-Iowa readers will find it humorous.  No, we didn't stop.  I've stopped there before and it is, not surprisingly, underwhelming. 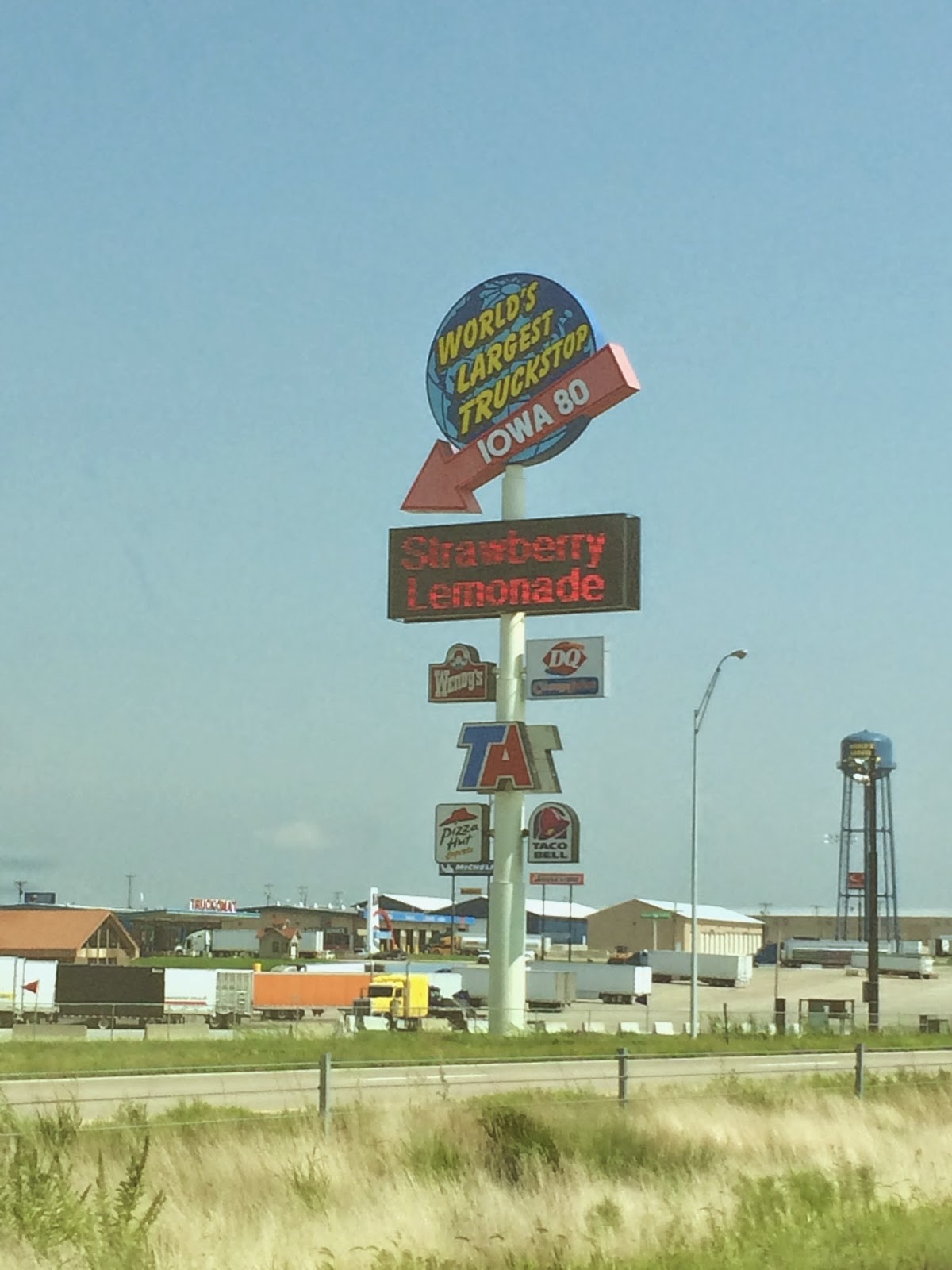 Posted by Unknown at 9:09 AM No comments:

I fear that this post is going to seem like a let down in the beginning.  Day 4 (Thursday) of this road trip largely consisted of driving mile after mile on I-80 across Nebraska.  But, your patience will be rewarded with some adorable pictures of the most adorable little man I've ever met.  Our day started out early.  Are you noticing a trend?  We needed to drive from Breckenridge, CO to Omaha, NE.  And, we wanted to get there early to spend some time with my brother, sister-in-law, and my nephew.  The beginning of the day was probably especially unpleasant for my mother because I was tired, hungry, and still a little salty that the weather hadn't cooperated for us to do Quandary Peak.  I think it was largely a food issue because once I had a yummy steak, egg, and cheese bundle from Mavrik convenience store in my tummy, I think I was a more pleasant travel companion.

Okay, I'm going to fast-forward through most of the day, because it pretty much just looked like this:

Although this day involved driving mile after mile and no fun side trips before our destination, our work was definitely well rewarded.  Just a few of the reasons that our stop in Omaha was one of my favorites: 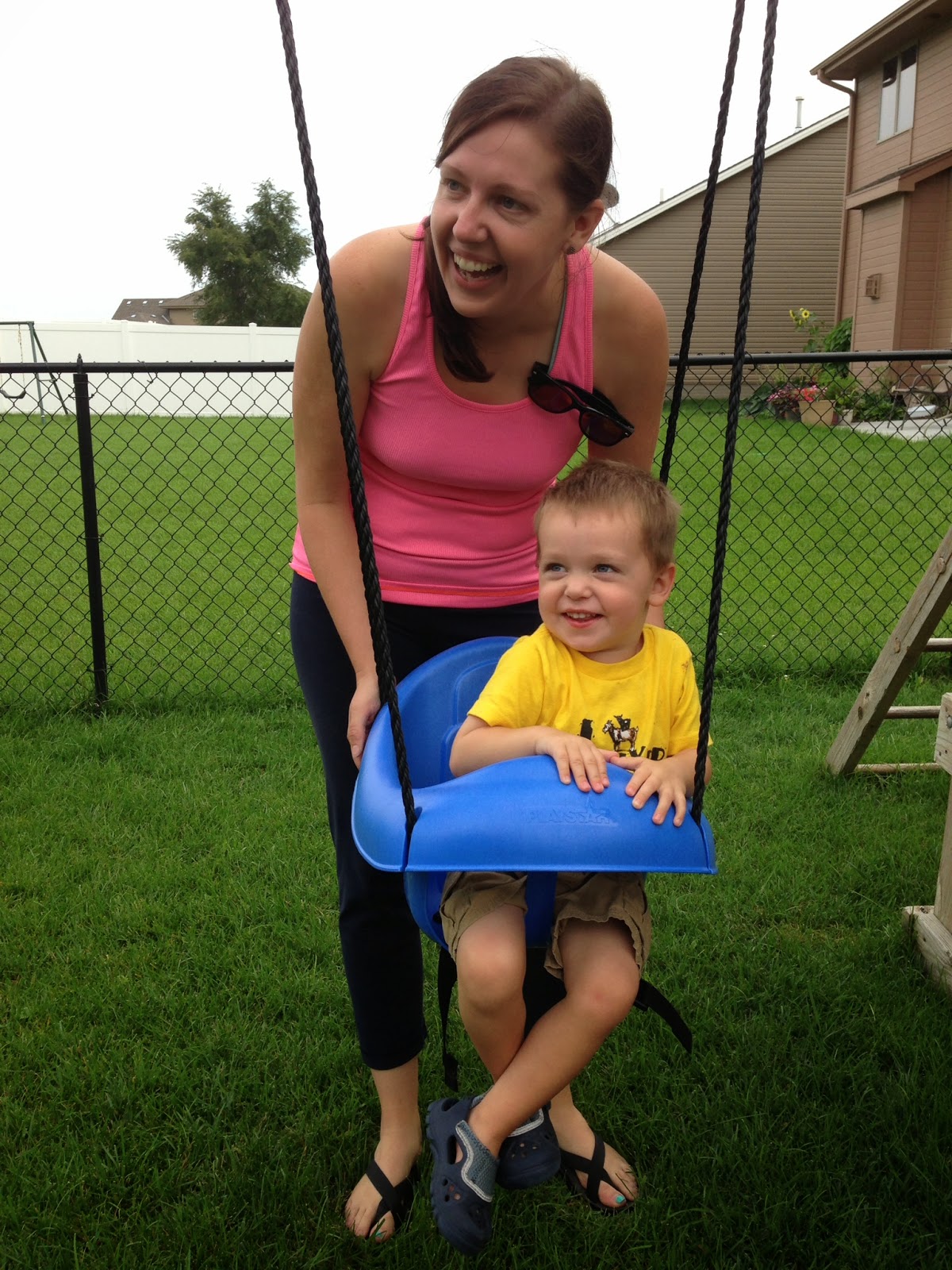 After dinner, the five of us went for a walk near the Old Market area of Omaha.  It is a really great area and a really fun place to walk.  Our first objective was "the big slides."  These were two parallel metal slides that were surprisingly long and even more surprisingly fast.
After the big slides and a bit more walking, we arrived at our ultimate goal: ice cream.  This kid is definitely related to me.  The level of obsession with ice cream that we share has to be genetic, right? (I think my dad has it too). 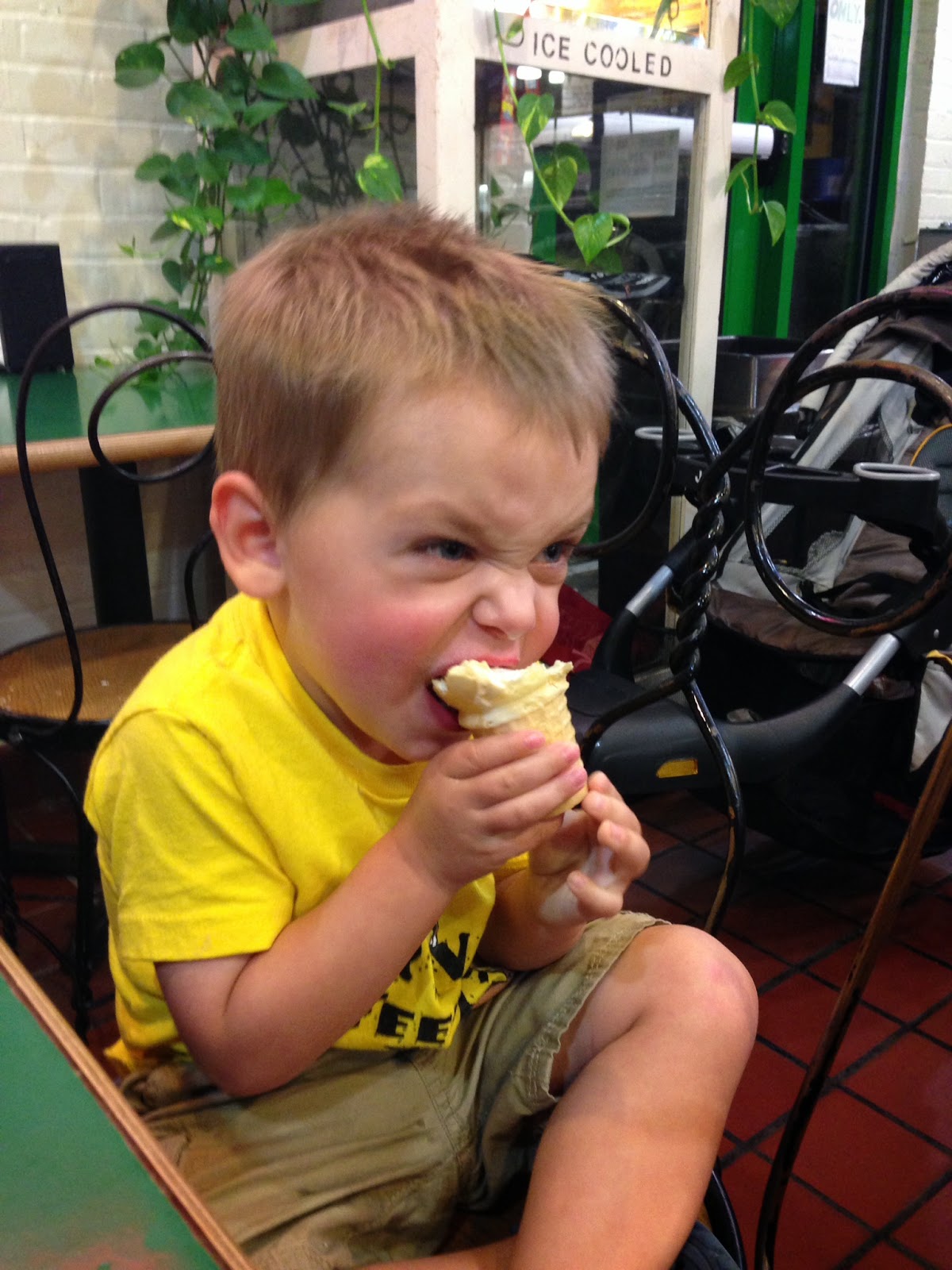 This ice cream shop was phenomenal!  I had a flavor called "Salty Susie."  I'm not sure what's in it, but it tasted like a salted caramel ice cream with Oreo chunks mixed in.  My brother told me that you can call ahead and they'll make any flavor you want, as long as you order at least a gallon or some surprisingly reasonable volume.  Next time I'm in Omaha, I'll be placing an order for cotton candy ice cream, my absolute favorite =)

After our exploration of downtown, we returned home.  It was time to get some sleep....I had 12 hours of driving scheduled for the next day.
Posted by Unknown at 8:15 AM No comments: