Slow Running Can Be Happy Running

Just over a week ago, at the 2012 Chicago Marathon, I completed my second marathon.  Now, when I finished I was overwhelmed with excitement because I improved my time from the 2011 Chicago Marathon!  Now, I didn't just improve my time, I cut 62 minutes!  Hopefully, you can understand my excitement. 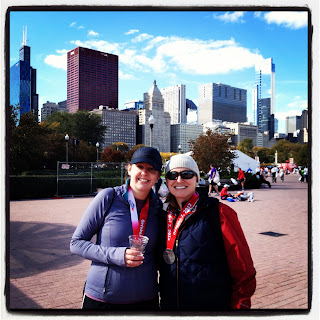 Me (left) and my good friend after Chicago Marathon 2012

Unfortunately, that joy faded as countless people asked my time, or asked my pace, or even asked how close I was to qualifying for Boston!!  So, as I had to with all these people, I want to be clear from the beginning on this blog:

Now, this is something that I have personally been aware of since I started running again in January 2011.  However, I swam and ran competitively through high school and swam all four years in college (I ran cross country only one year in college), so admitting to the world how far my fitness fell in the four years after college has been really tough.  In fact, it was not until I read a blog post by one of my favorite bloggers (Chicago Runner Girl), that I realized how much this "marathon chatter," as she called it, was getting me down.  **Check out the post here.

Going in to the 2012 marathon, I wanted to cut 30 minutes - I blew that out of the water.  I was amped - and I'm not going to justify it to anymore people that look down on my 5 hour + marathon time.  Maybe the next one will be sub-5, maybe not.  But I know one thing, I'm going to have tons of fun training for it and even more fun running it!!