Obviously, I took a little blogging hiatus.  I went through a little phase where I was just completely done with running and training by myself.  This phase lasted pretty much the entire month of September….which is pretty unfortunate timing when you’re supposed to be doing an October marathon….whoops!

But, I’m kind of a dumb jock when it comes to these things.  Even though I knew I was completely undertrained, I decided to run the Chicago Marathon anyway.

Even to the extent that I am a “dumb jock,” I’m not completely irrational.  I recognized that this was not going to be a marathon in which I attained a PR.  Rather than attempt to do this marathon in a manner that would injure my woefully unprepared body, I decided to treat this marathon like a Long Run for my marathon that I’ll be running in December, the St. Jude Memphis Marathon.

So, last Friday night, Husband and I met in the greatest city on the planet.  We got to our hotel super late and pretty much crashed. (Have I mentioned what a pain it is to fly from Pacific Time Zone to Central Time Zone for just a weekend trip?!?)  On Saturday, we had three missions: (1) packet pick-up; (2) hydrate; and (3) eat all the carbs.  We were *very* successful. 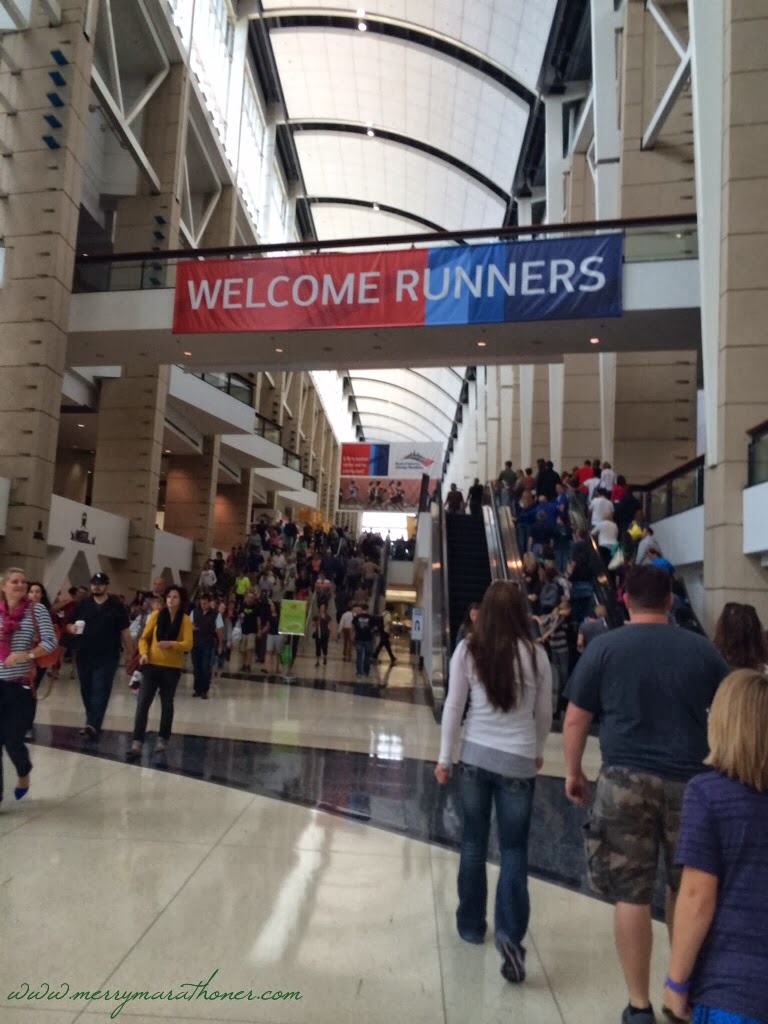 I have to say, Race Expos are among my favorite things in the world.  I just love the excitement of picking up my race bib and wandering around the many booths of various running and fitness wares. 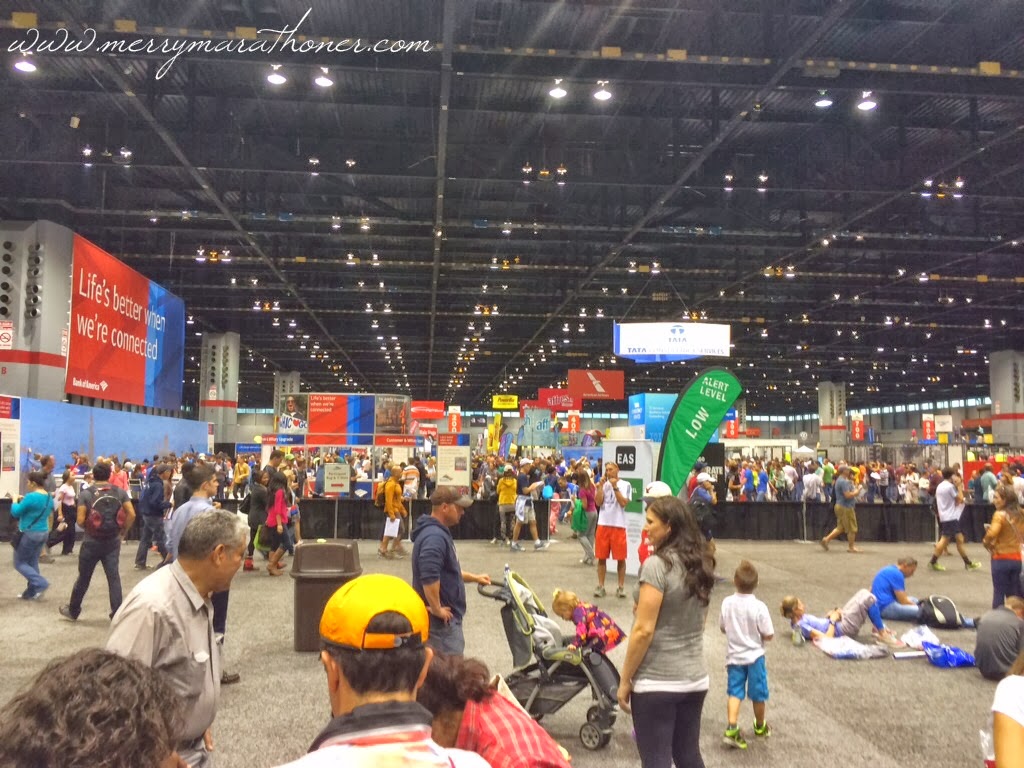 This year, my favorite booth was probably the Nuun Hydration booth.  I, like everyone else in the running world, am basically obsessed with Nuun.  A while ago, I purchased a four pack of the Nuun Tropical and a four pack of the Nuun All Day Grape Raspberry.   I’ve been burning through them relatively quickly, but hadn’t had an opportunity to try any of the other flavors.  Chicago Marathon Expo to the rescue!!!!   At the Nuun booth, they had set it up so you could try out about a dozen flavors in cups the size of Dixie cups.  Genius!!  I am no officially obsessed with watermelon and strawberry lemonade.  Seriously, buy these flavors.  I really think you won’t regret it.

(This is where a picture of the Nuun booth would appear…but apparently, my little hiatus from blogging made me forget everything about blogging and I neglected to take a picture – won’t happen again.)

I also spent a lot of time dwelling on the fact that I was undertrained and that I wasn’t going to be happy about the outcome.  I do this sometimes, dwell on things over which I no longer have control.  I know, I’m probably the only one out there that does that. (sarcasm, I promise)  I especially felt overwhelmed by the task I had placed before myself for the following day when I looked at the marathon course map.  But I sucked it up to smile pretty for a picture.  Oh, the sacrifices I make! 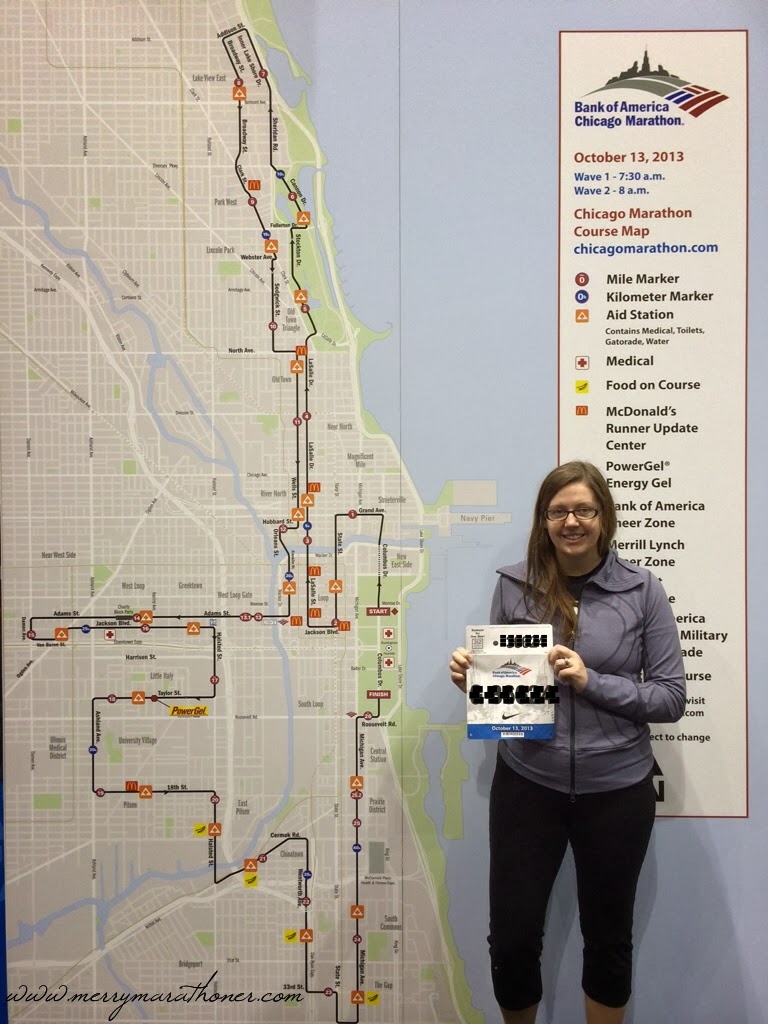 We spent the rest of Saturday relaxing and was really a very lovely day!  We even went to a movie with one of my very best friends, at which I ate an extremely delicious soft pretzel (more carbs).  Then, we had a delicious dinner of carbs on carbs (bread and gnocchi for me) with the same very good friend at a charming little restaurant in Lakeview.

After dinner, we traveled back down to our hotel and I couldn’t stop thinking about how grateful I was that our hotel was just a few short blocks from the beginning of the race.  I needed the sleep because 5:00 am central was going to come very early for this Pacific Time Zone runner.

It seemed like I had barely closed my eyes, when my alarm went off and it was time to see how my body was going to hold up over 26.2 miles.  We got a bit of a late start, but not too bad and I arrived in my start corral with plenty of time to spare. 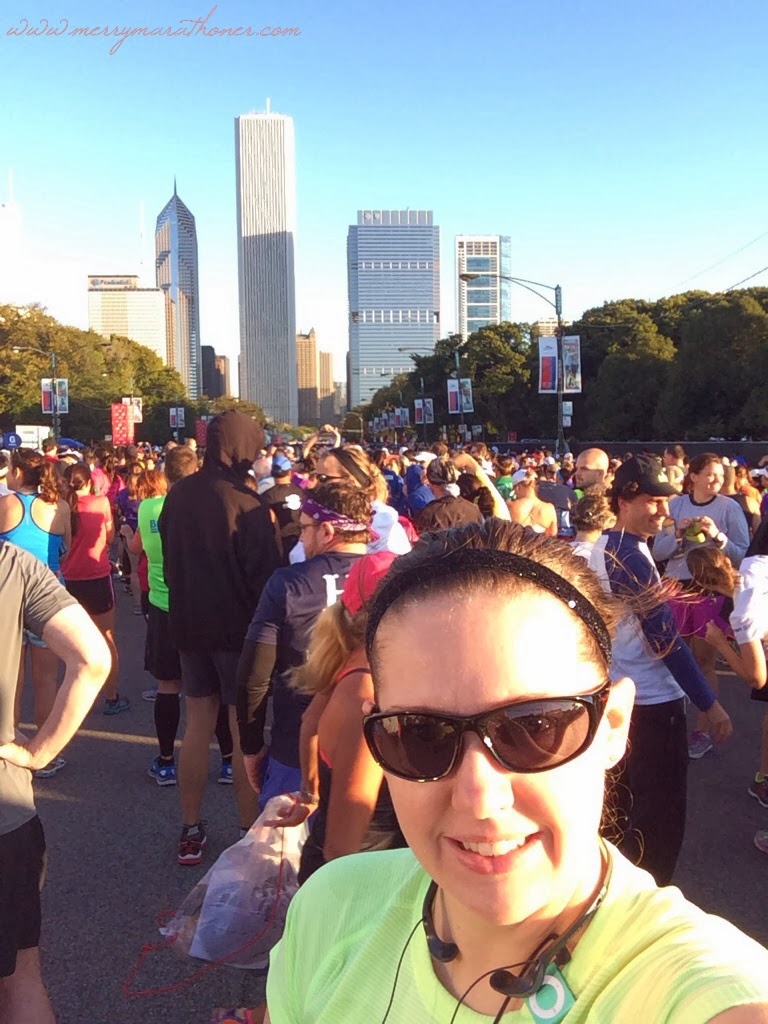 The weather was beautiful!! 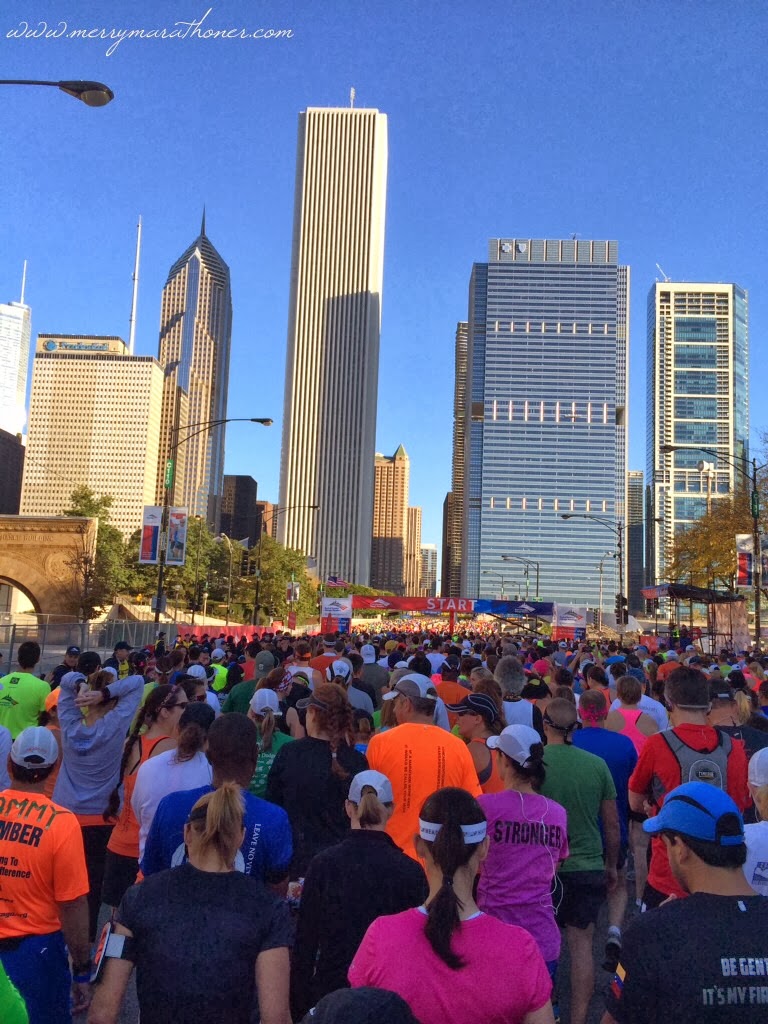 Wishing I could somehow will more fitness into my body, I approached the start line and I was off on my third consecutive Chicago Marathon.  I felt really great as we headed north and wound through River North a bit before heading back south to the Loop on State Street – past the Chicago theatre and then we headed back north on La Salle.  I love running up La Salle because it reminds me of the first summer that I lived in Chicago.  In fact, the 4-mile marker is directly in front of the apartment in which I lived that summer.

All the north bound miles passed pretty quickly and I felt great (of course I did, I had only run 8 miles).  I love the section through Lincoln Park because the course goes right by the apartment in which I lived for my second summer in Chicago.  (I don’t like to think about this one as much – too many stressed out, terrified memories of studying for the Illinois Bar Exam)

We finally started back south and before I knew it we were back in the loop and headed west and if you’ve run the Chicago Marathon, you know what that means….HALF WAY!!!  My half split was 2:25 which felt pretty good, but I suspected that it was too fast and I was going to have problems eventually. =(  And I did.  I didn’t start really falling off until sometime between Miles 16 and 22.  I know, I know.  That’s a pretty big span of time, but the second half of marathons is always a blur to me.

By the time I reached Mile 22, I was fed up with myself, with running, and with marathons.  I seriously thought that this was going to be the first time that the 26.2 beat me.  If I had been near an “L” stop, I might have just gotten on a train back to Grant Park.  However, there are pretty much ZERO “L” stations once you pass the station by the White Sox Stadium (Mile 21ish, I think).  Well played Chicago Marathon planners.
Anyway, I was pretty down-trodden around Mile 22 and seriously considered walking the entire 4.2 remaining miles.  I also considered stopping and sitting on a curb and crying (someone please remind me to train more for my next marathon!).  However, I did neither of these things.  I ran bits and pieces and then sometime between Mile 24 and 25, the spirit moved me, or something, and I started running and ran most of the rest of the marathon.

I think I say this every year, but I was never so happy to see that finish line…. 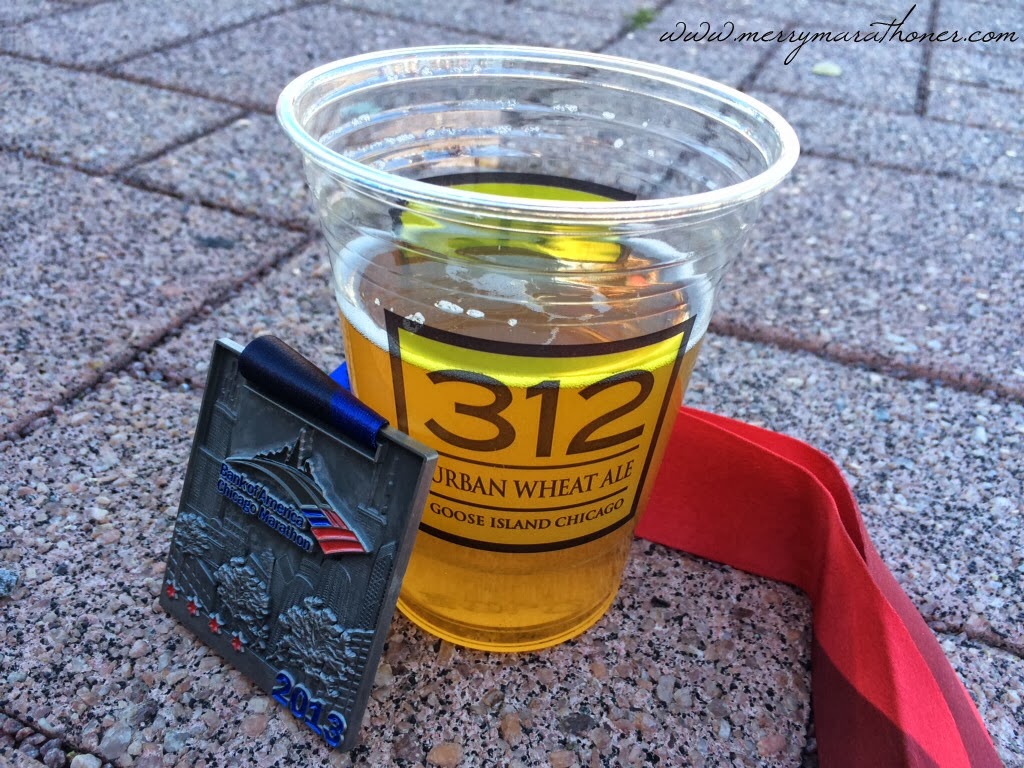 …and the cup of frothy 312 Goose Island waiting for me after the finish line.

It wasn’t even close to what I was hoping for a few months ago.  My time was about 25 minutes slower than my goal time and 16 minutes slower than my PR.  So, let’s just say this isn’t a marathon that I’ll be bragging about to my friends and family.  I think this will one will be filed under “Remember that time I was dumb enough to run a marathon when my longest run leading up to it was a half?”

I’m supposed to be doing the Memphis St. Jude Marathon at the beginning of December.  I think this was a step towards my fitness for that and hopefully the cooler temperatures of October and November will help me stay motivated to train.  Maybe, just maybe, I’ll be able to redeem myself a bit in Memphis.