Grand Canyon (yes, I realize I went there in February and it is now almost August)

Like most human beings I know, intimidating tasks are sometimes hard for me to start.  This is especially true when said "intimidating task" is a hobby-related task, like this blog.  You know, it's a project that I should do because it'll be great once it is done, but I don't really have to do it.  Anyway, that's how I felt when I realized that Adam and I took over 200 pictures when we hiked the Grand Canyon back in February (yes, I realize it is August).  So, it has seemed like quite the undertaking to cut that down to a reasonable number of photos to post here without going overboard.

On Sunday, February 16, 2014 (the day after we hiked Juniper Peak), we drove down to Flagstaff, Arizona.  We did a little sight-seeing at Wupatki National Monument, where we walked around 800 year old Pueblo Ruins, but our main objective was to hike as much as the Grand Canyon as we could on President's Day (Monday, February 17, 2014).
After visiting the pueblo ruins, we drove back to Flagstaff, stocked up at Target, carbed up at Olive Garden, and went to bed.  Before we knew it, our alarms were going off at 5:30am so we could pack up and make the 75 minute drive to the South Rim of the Grand Canyon.  If I'm being honest, we shut the alarms off and slept for another 90 minutes before we finally got up.  But, we got up eventually.
Our first stop when we got to Grand Canyon National Park was the spectacular Mather Point.  It was Adam's first time seeing the Grand Canyon and it was incredibly fun to see his reaction. 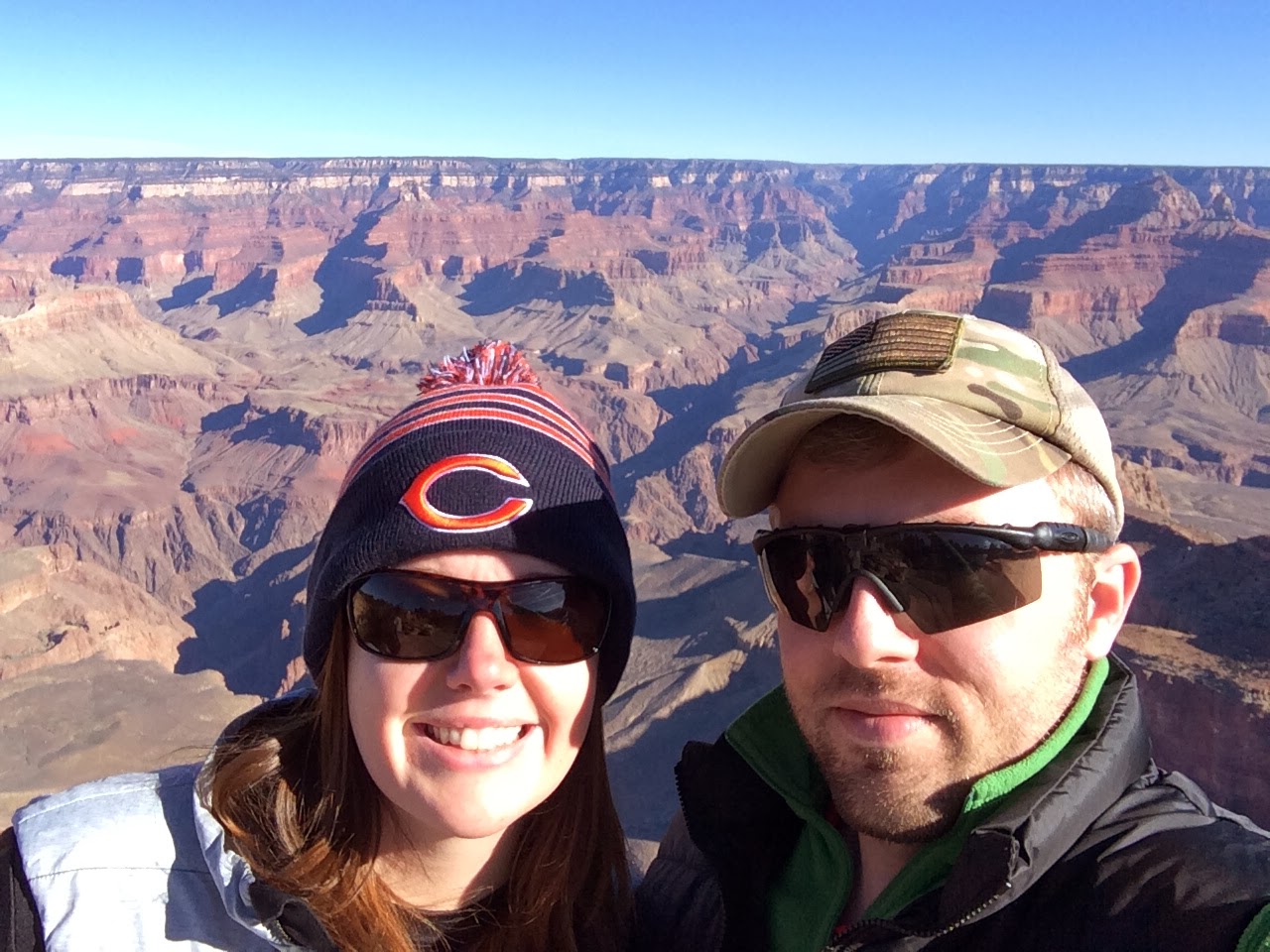 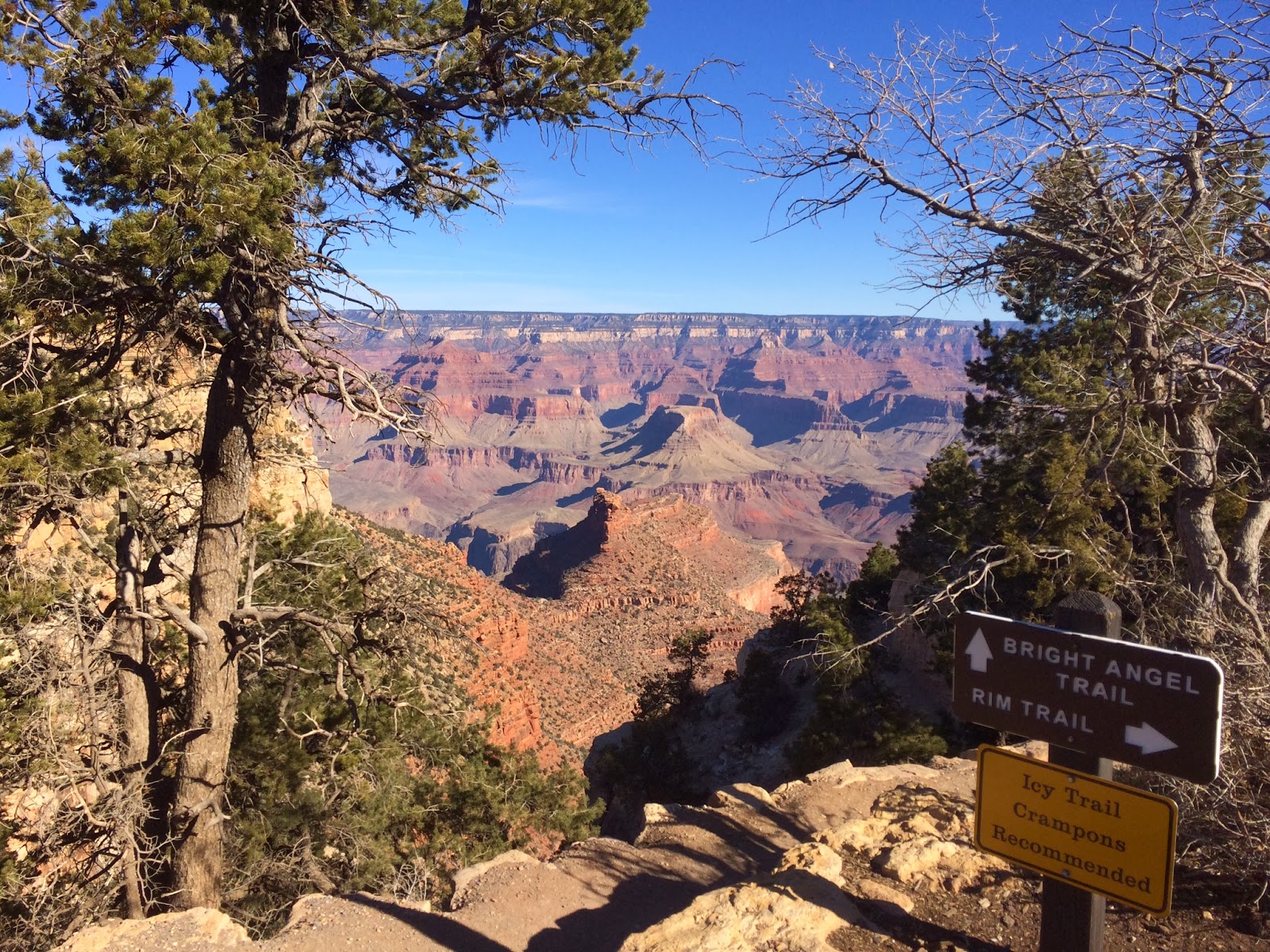 ********************
Okay, here's where I should insert my disclaimer.  Given the short days and the extreme elevation that you have to climb to get out of the Canyon, it is STRONGLY recommended that you NOT try to hike all the way to the Colorado River in a single day.  Even when the days are longer, it is ill-advised to do this hike in a single day because the temperatures at the river are remarkably warmer than they are at the rim.  In fact, throughout the pictures below, you'll notice that I slowly remove articles of clothing on the way down and put them back on as I ascend back to the rim.
********************

Now that the disclaimer is out of the way, I'll tell you that we did hike the 16 miles round-trip to River Resthouse and back to the rim in one day.  Yeah, I know...  But, in our defense, we hike a lot and we brought quite a bit of food and water and, importantly, we brought our headlamps and spare batteries, in case we ran out of daylight.

In addition, we knew the mileage and elevation at several major landmarks.  With this knowledge at our fingerprints (I literally wrote it on a piece of paper from the hotel and carried it in my pocket), we could make a decision when we got to Indian Gardens whether we thought we could make it safely to the river and back up to the rim before dark.  The mileage was also good for our morale as we made the trek up the thousands of feet from the canyon floor to the rim.
We quickly trekked past (and through) the first landmarks, including the fun little tunnels.  It was chilly during those first few miles and I was wearing every possible layer. 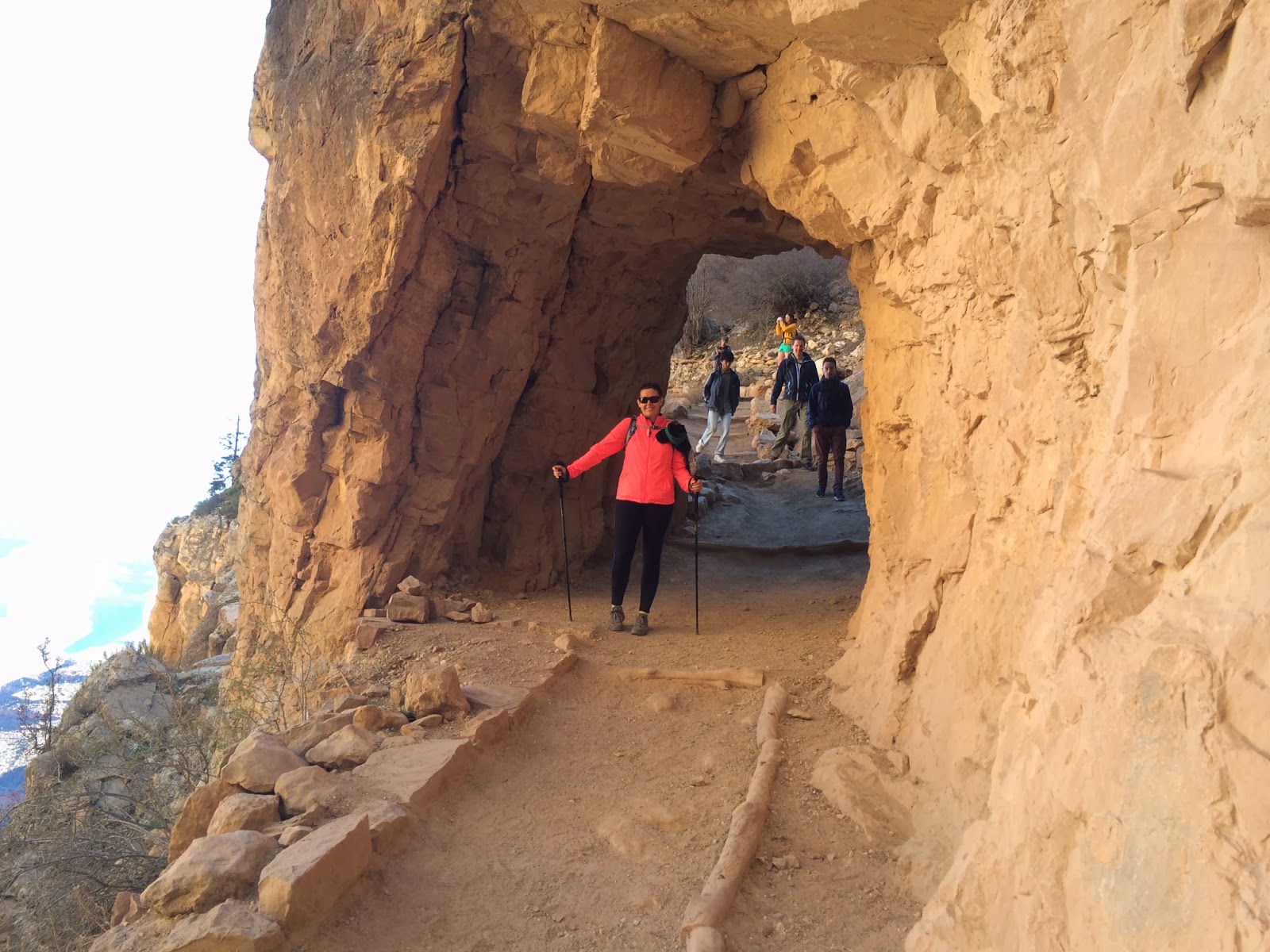 As we hiked further down the initial switchbacks, it didn't take us long to realize that this hike was unlike any adventure we had ever undertaken.  It was pretty intimidating walking downhill and seeing miles of trail laid out in front of you, but a thousand or so feet below you.  Of course, seeing all that trail below us was just a constant reminder of the fact that once you get down from the Rim, hiking back up to the Rim is mandatory.
Even though we got a later start than we planned, we arrived at Indian Gardens super quickly.  Yes, yes, we were traveling down hill the whole time.  But, even with that in mind, we covered the 6 miles from the Rim to Indian Gardens WAY faster than we anticipated.  So, naturally, we decided we were hardcore enough to make it the 3 additional miles to the banks of the Colorado River and River Resthouse. 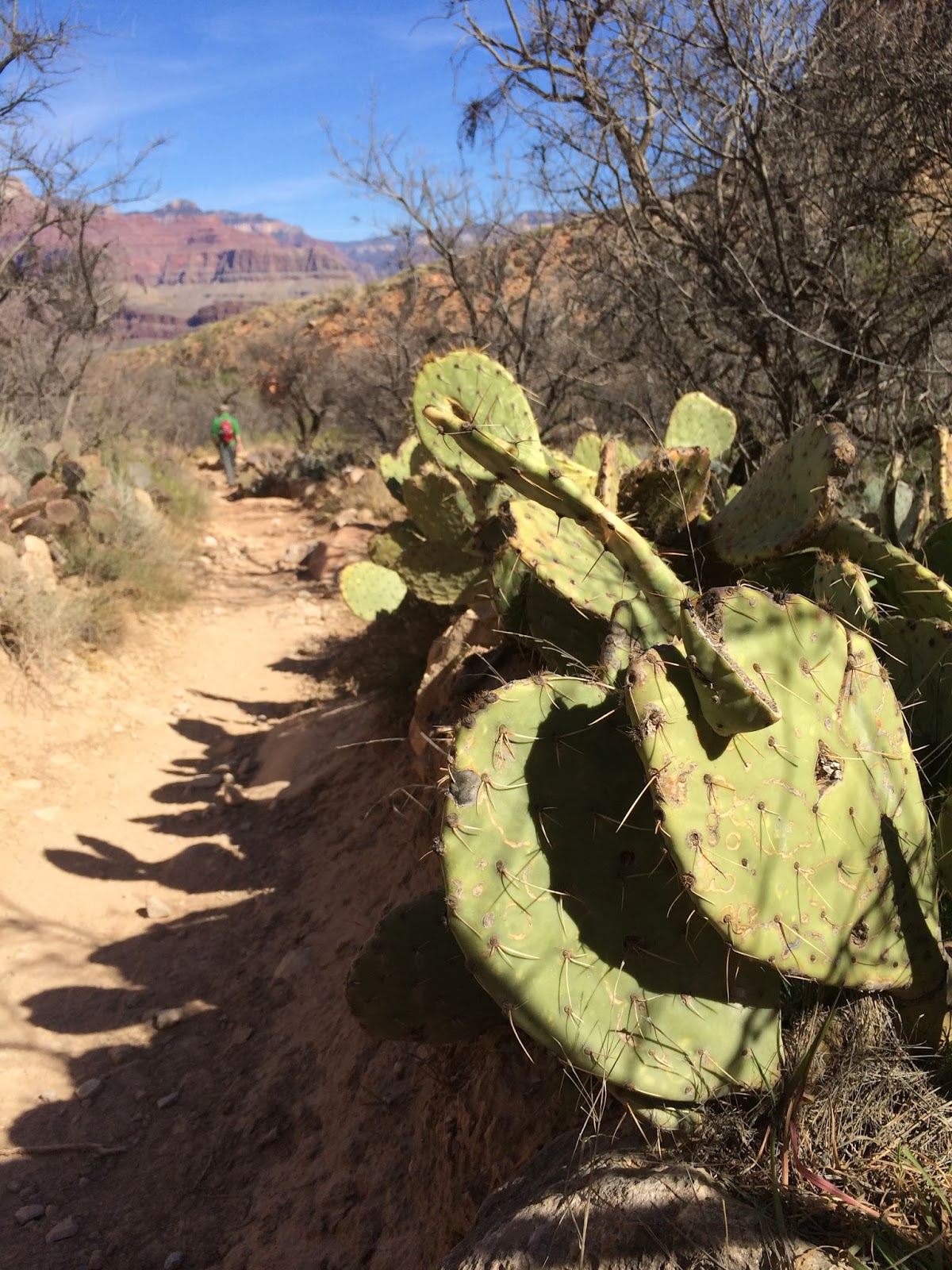 Originally, we had planned on hiking out to Plateau Point.  However, we didn't realize how early we'd arrive at Indian Gardens.  With the Colorado River a mere 3 miles away, we couldn't resist.  The trail from Indian Gardens to the river, like everything on your way down to the river, was lovely.  Although, it was a bit intimidating to look at all those switchbacks and to think about how much "fun" it was going to climb back up them. 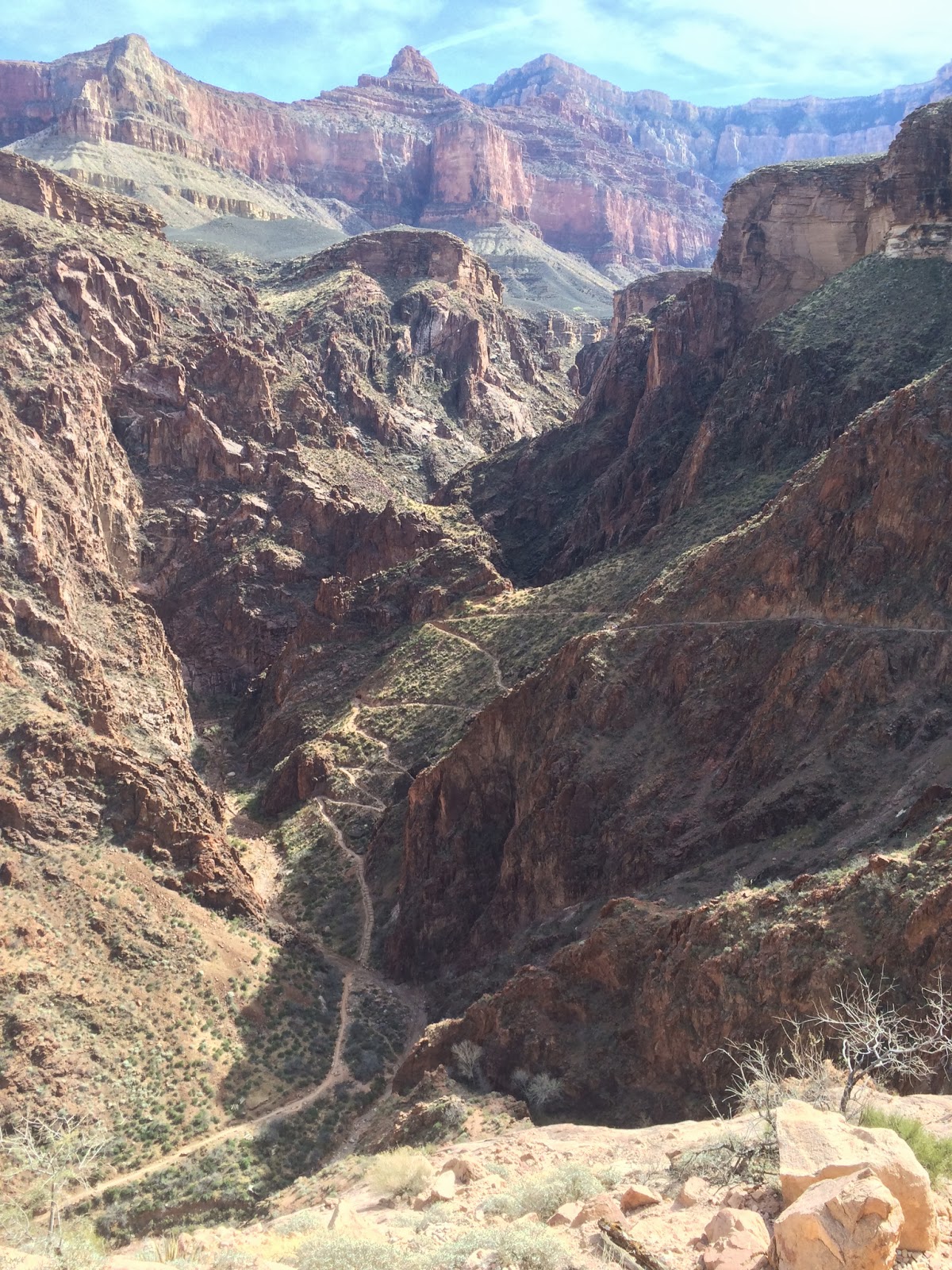 Finally, after lots of switchbacks, trudging down down down, and spending a lot of time trying to ignore the trepidation of the inevitable up-climb, we made it to the river!!  I'm pretty sure the river and its surroundings are objectively beautiful.  But, it was even more beautiful to us because we had arrived at the halfway point of our adventure! 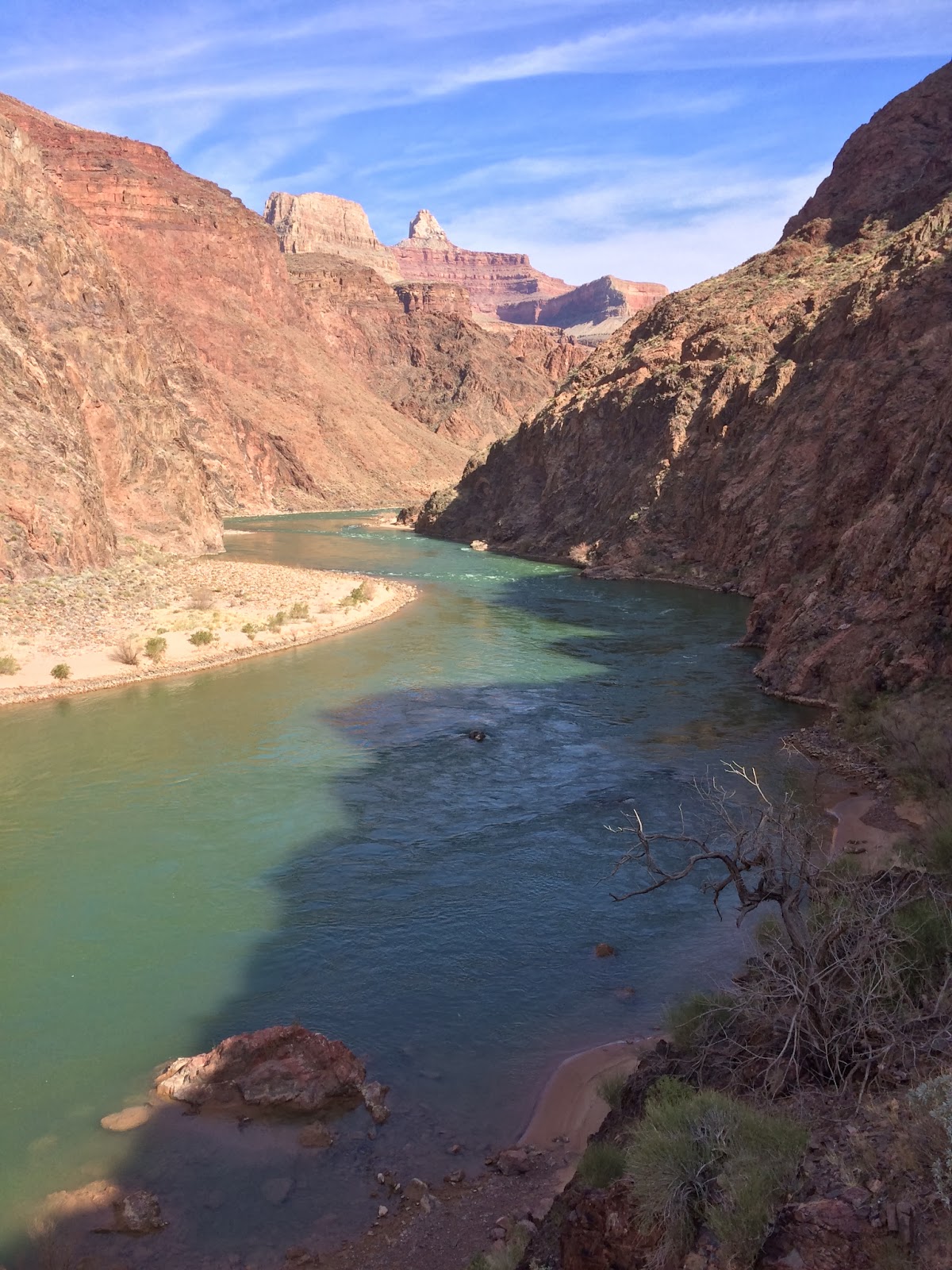 The river was extremely beautiful, but I certainly did not entertain any thoughts of going for a swim given the very powerful currents and rapids. 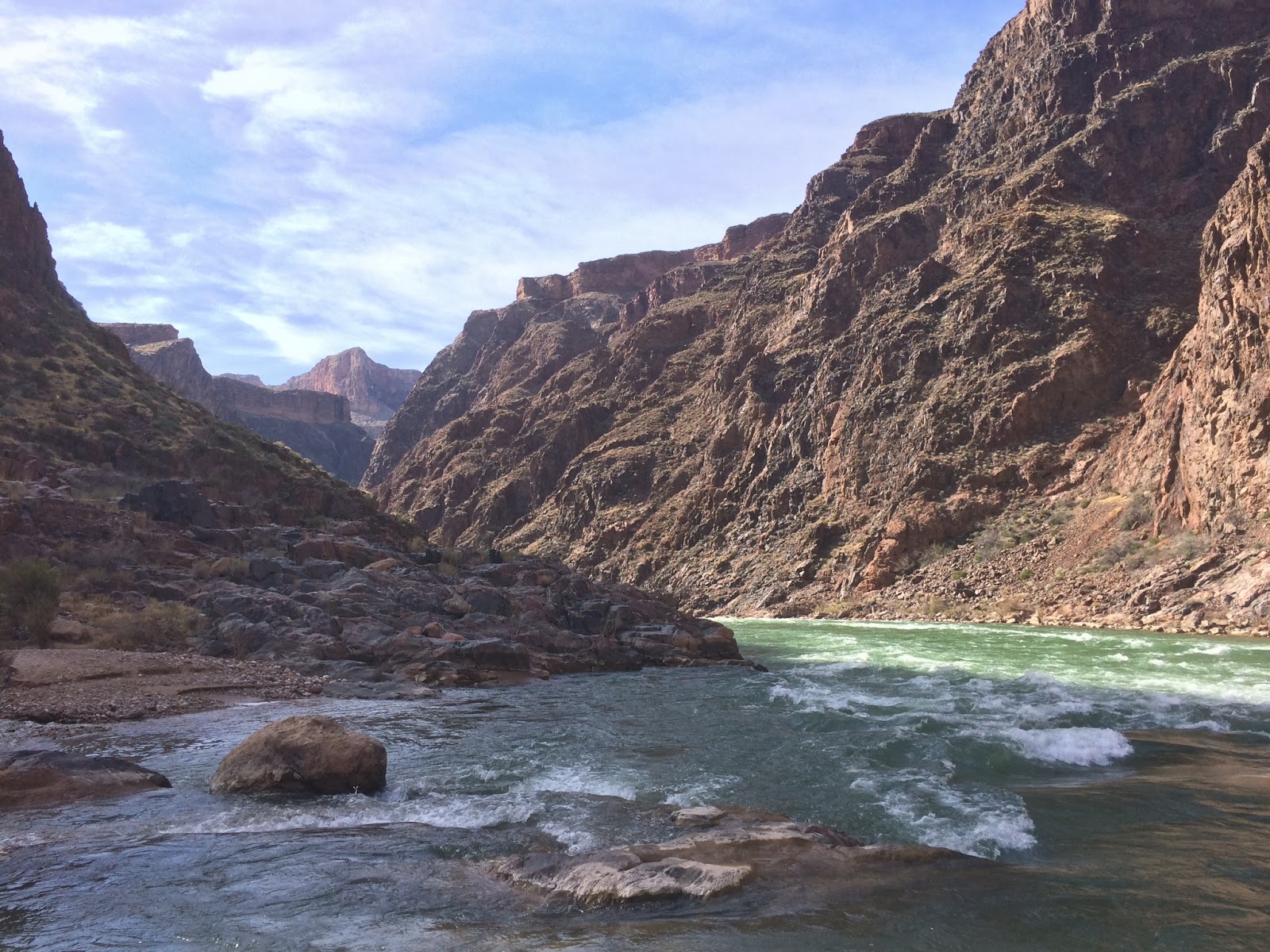 I'll spare you the details of the climb back to the rim....they're not that pretty.  It involved putting one foot in front of the other and a little bit of cursing.  There were some spectacular views though....I'll let the images do the talking (because most of the ascent was a blur of exhaustion and dreams of junior bacon cheeseburgers from Wendy's). 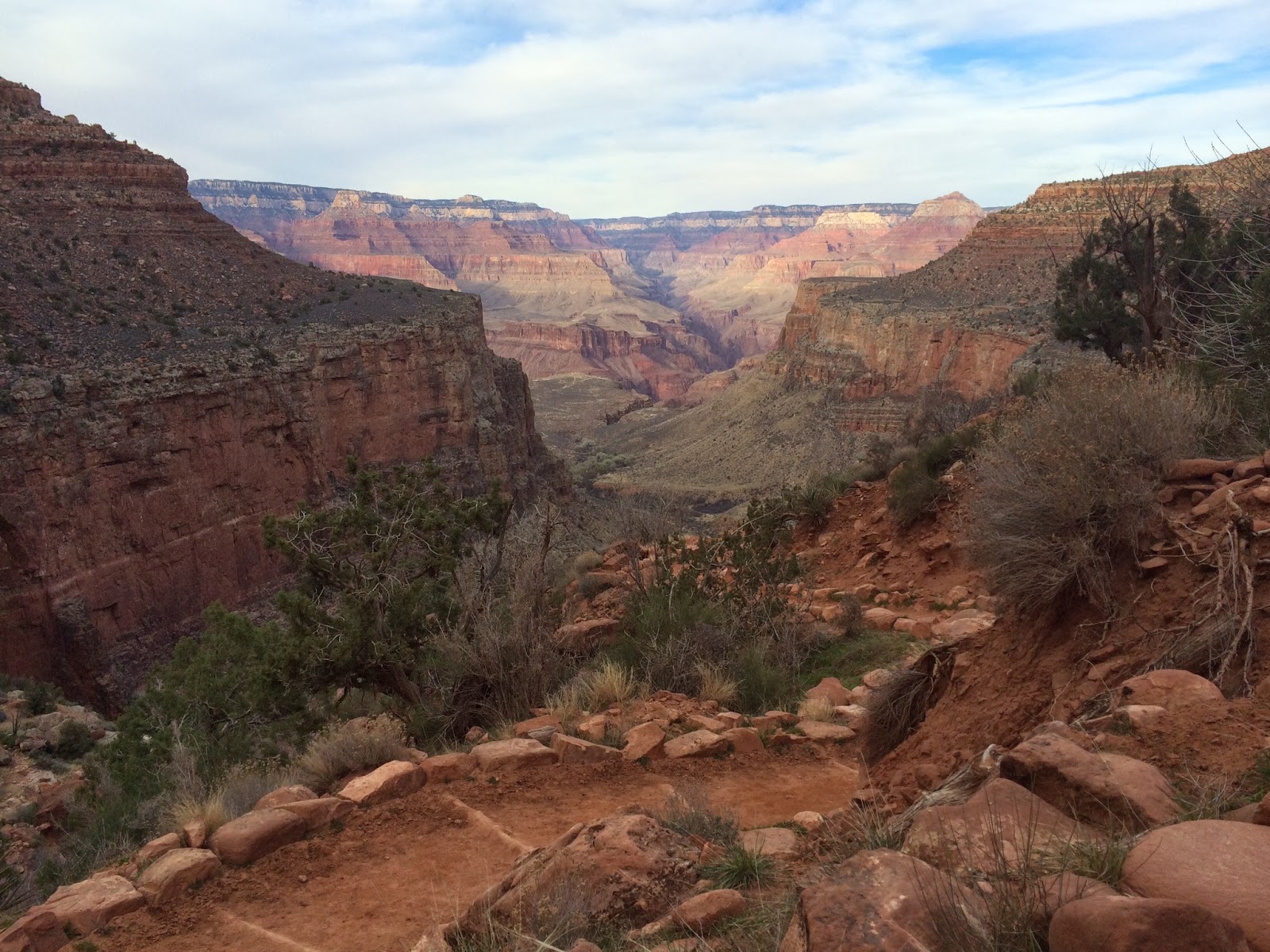 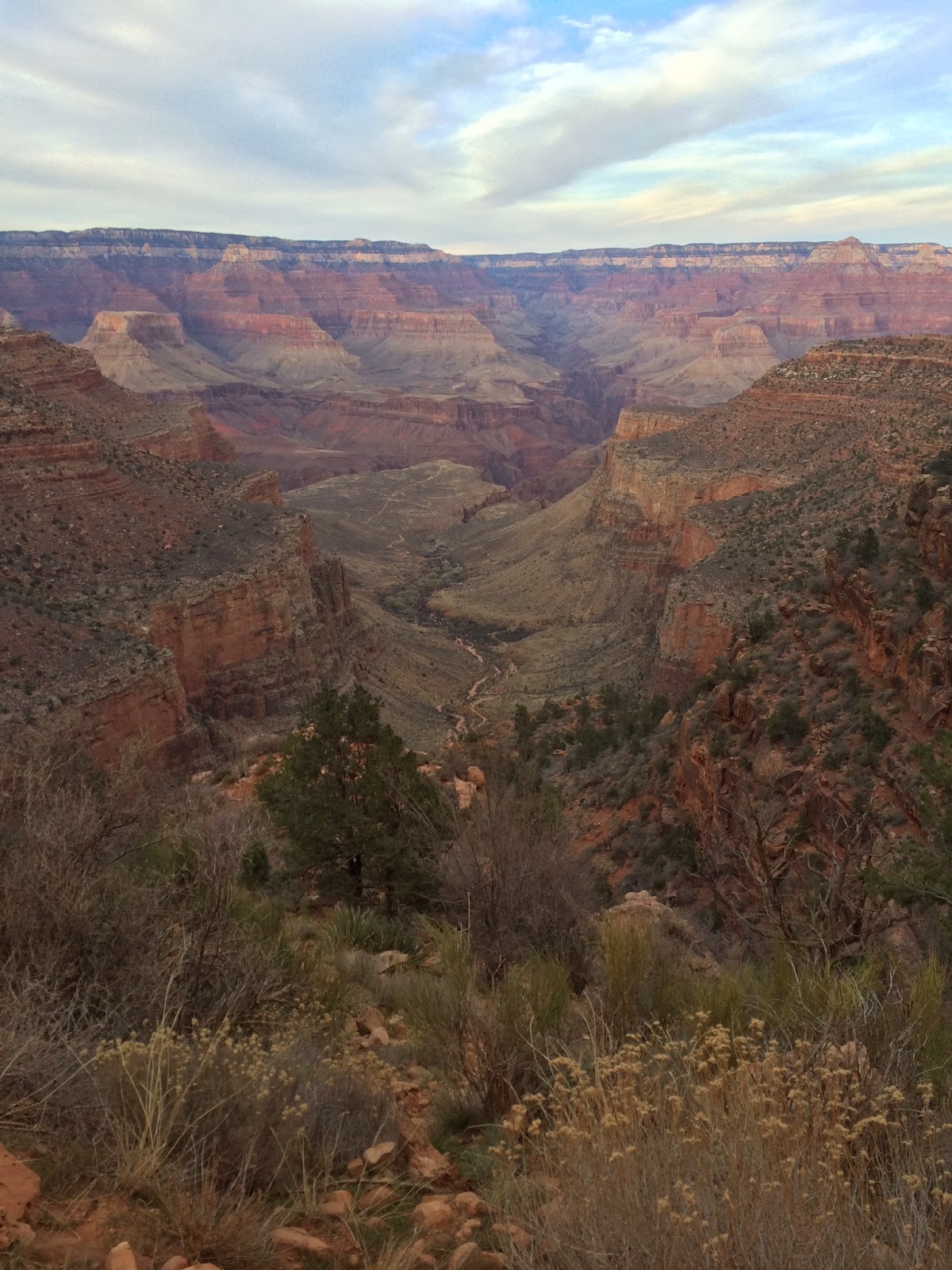 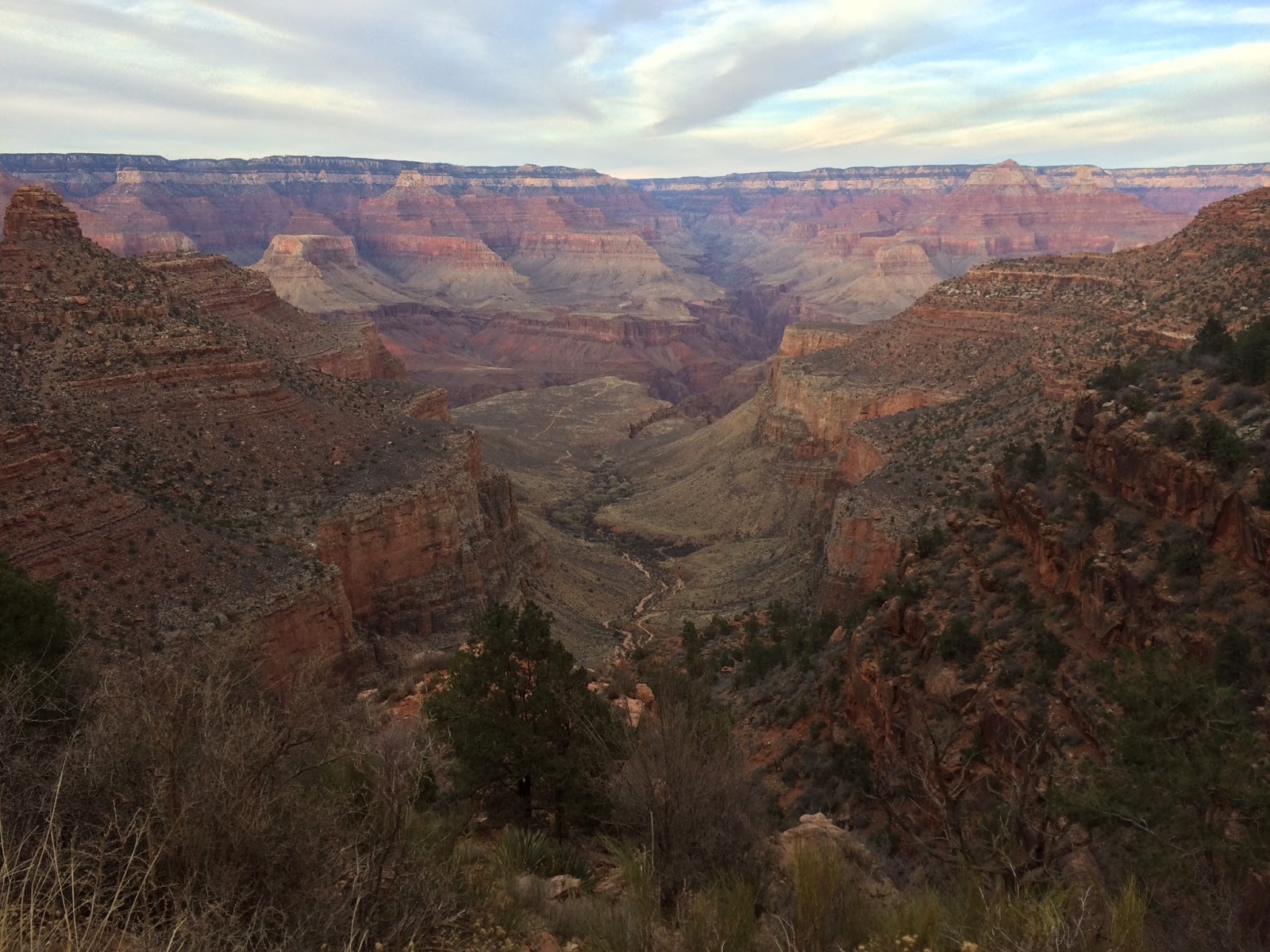 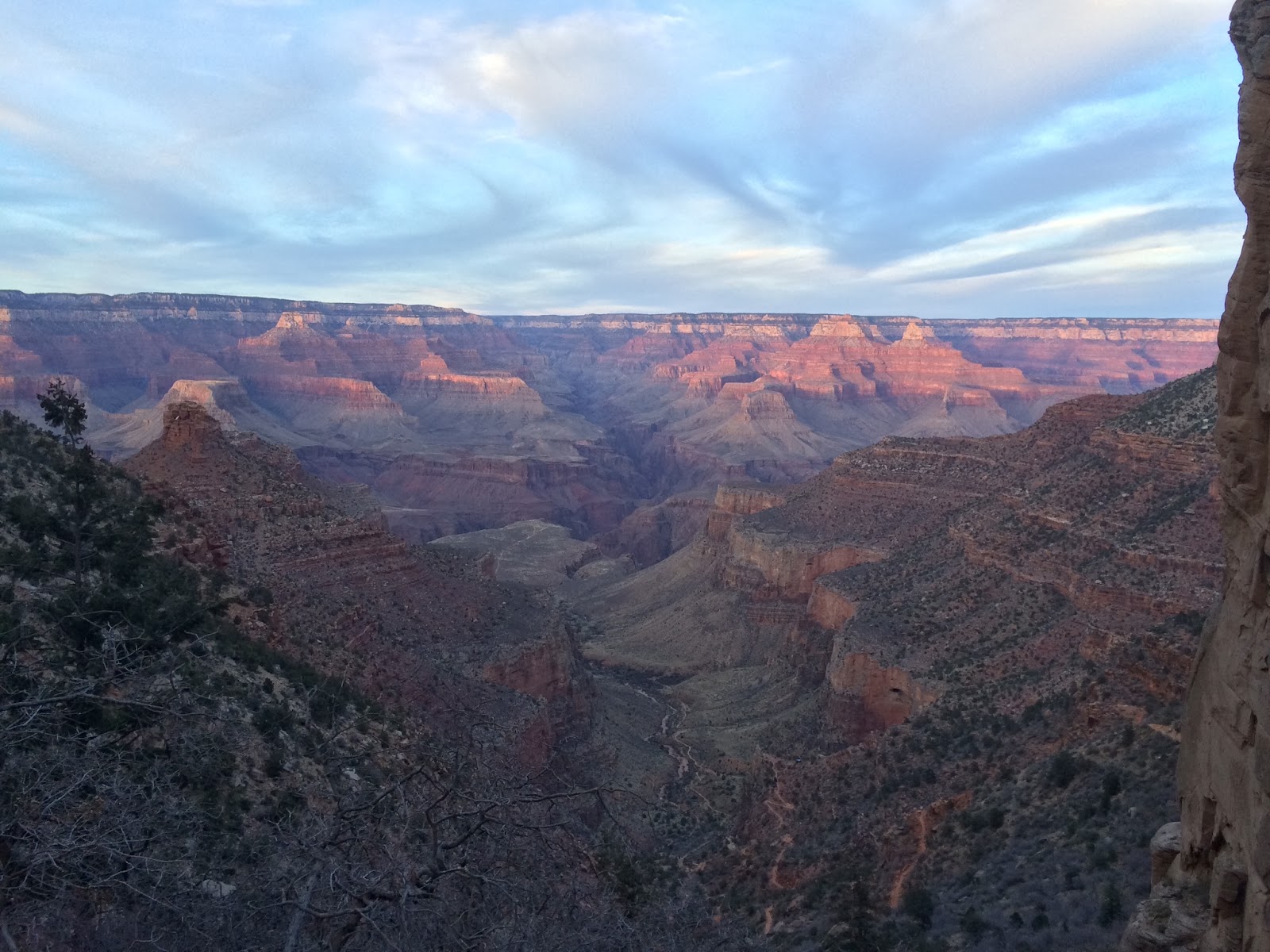 I was overjoyed when we finally started getting close to rim.  We were starting to lose daylight (never fear, we had headlamps) and I just wanted a nap. 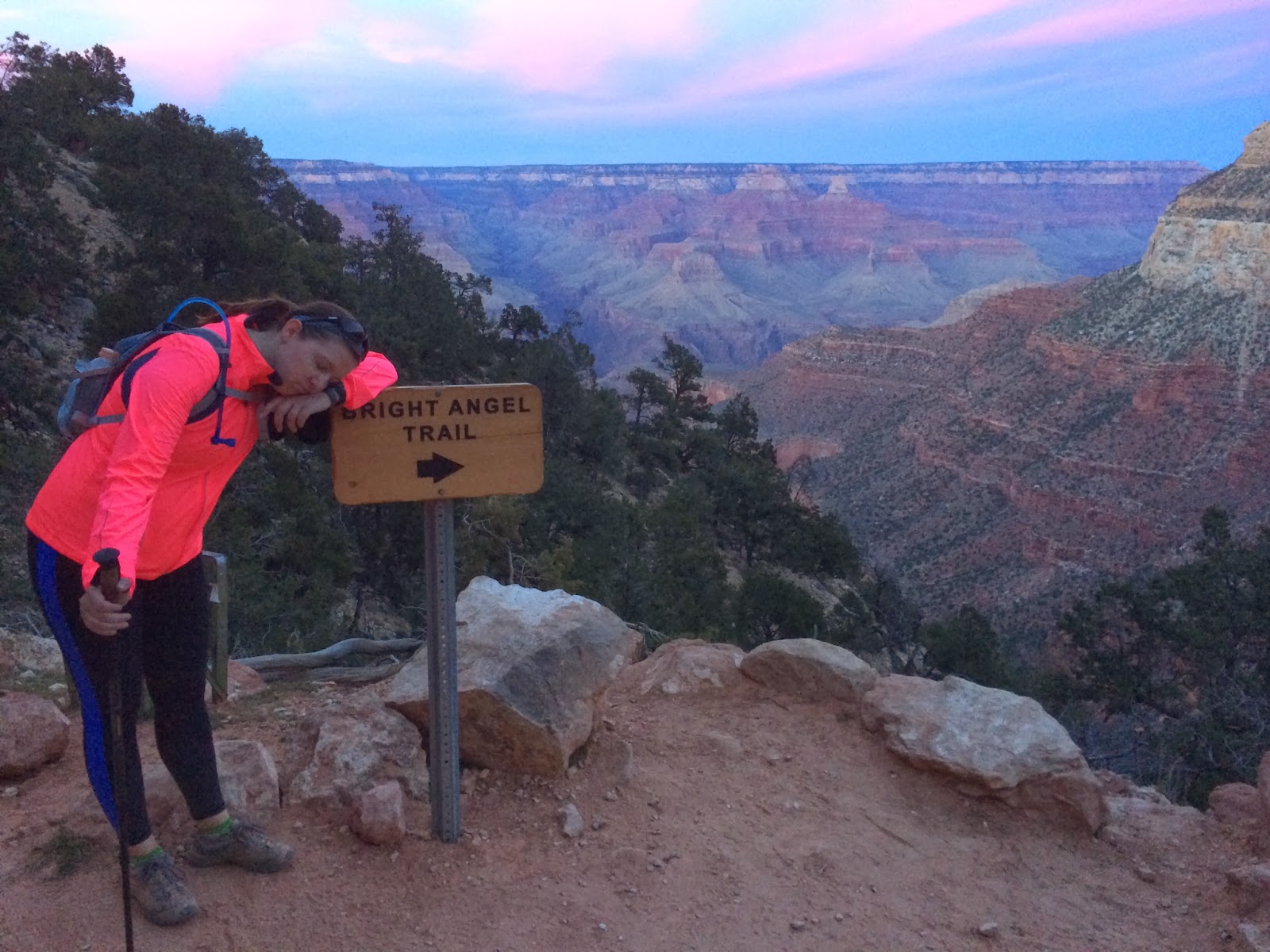 It was an amazing day and I'd definitely do it again!  Each time I've visited the Grand Canyon, the view from the rim takes my breath away, but it can't beat the sighs from below the rim.  Hiking the Bright Angel Trail was, more often than not, like walking through a magical wonderland.  In addition, this hike was an amazing workout during a time when I was seriously trying to shed some "winter layers." 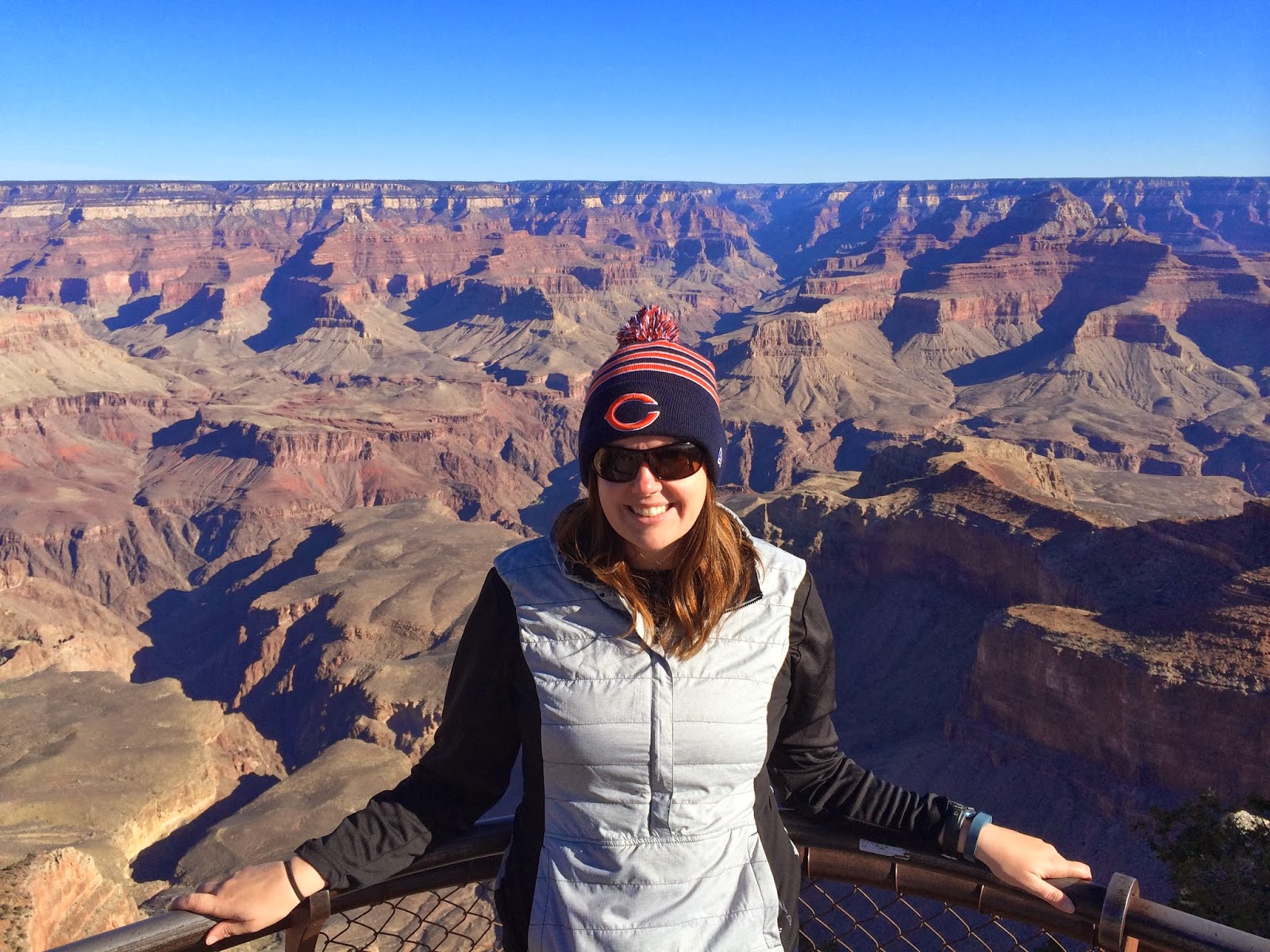 I can't wait to update the blog with all the adventures I've had since Grand Canyon.  There are a lot of them and each had more incredible sights than the last!!!
Posted by Unknown at 9:48 PM