Wow.  Waking up at the Far View Lodge in Mesa Verde National Park was incredible.  I'm not sure if it was the excitement of seeing the cliff dwellings, the relief of having Maggie with me, or just the overall surroundings in these adorable bungalows, but I was just so happy to be there.  I think I mentioned this yesterday, but just in case, the food at Far View was really, really delicious:  chicken biscuit sandwich with green chipotle gravy.
After my excellent breakfast, we headed in the direction of the cliff dwellings.  For the safety of the visitors and for preservation reasons, most of the cliff dwellings are accessible only via tours conducted by park rangers.  These tours ring in at the whopping sum of $4/person/tour and my mom and I both agreed that it was some of the best $4 that we ever spent (well, it was the best $8 my mom ever spent...she paid for mine =)).
You can book the tours either at the visitor center at the front of the park or at the museum, which is approximately 20 miles into the park.  Because we were already 15 miles into the park, we went to buy our tickets at the museum.  Because we only had a limited amount of time before we needed to move on, we had time to tour one cliff dwelling.  Our top choices were either the 9:00 am (the earliest available) or 9:30 am tour of Cliff Palace or the 9:00am (there was no 9:30 am) tour of Balcony House.  I was a little stressed when I realized that the museum doesn't start selling tickets until 9:00am because that meant that the 9:00am tours were definitely not an option.  Thankfully, the ranger that was in charge of selling the tickets opened 30 minutes early!!  After talking to the amazing rangers, we learned that there was an excellent view of Cliff Palace, the largest cliff dwelling, from an overlook that was less than .25 miles off the road.  We also learned that the Balcony House tour would require us to climb a 32 foot ladder, crawl through an 18" wide tunnel, climb another 10 foot ladder, and walk up a cliff face (with guard rails and fencing of course).  I don't think you'll be surprised to find out that Balcony House quickly jumped ahead of Cliff Palace as my preferred tour.  My mom was a little more hesitant than I was, but after some coaxing and sweet talking, we bought tickets for the 9:00 am Balcony House tour =)

Before we got to the start of the Balcony House tour, we decided to run down to the overlook to snap a few pictures of Cliff Palace.  This is probably the cliff dwelling that comes to mind first when most people think of Mesa Verde.  It is huge and extremely well preserved!! 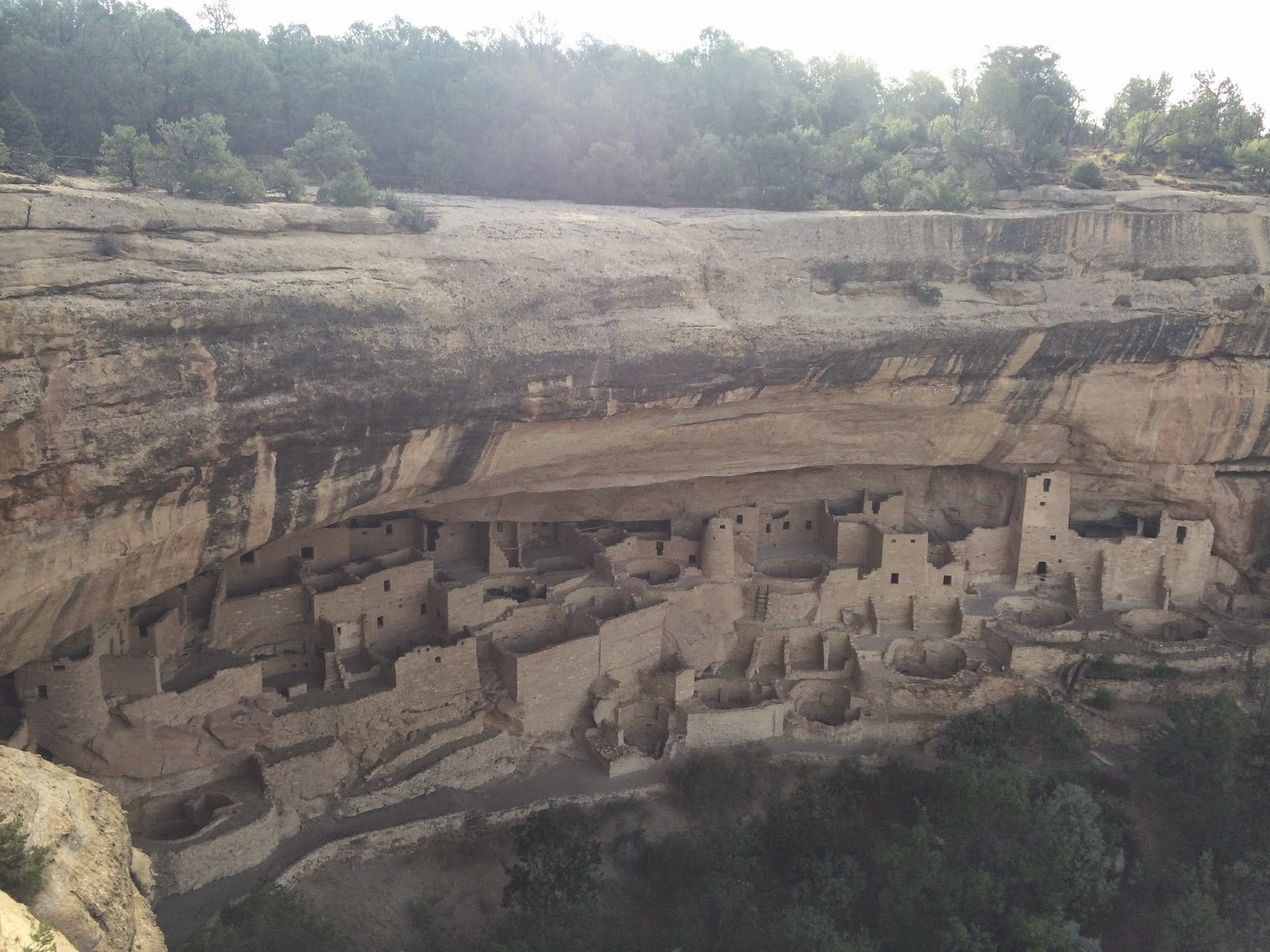 After our brief stop at Cliff Palace, we continued our drive to the beginning of our Balcony House tour.  I was excited; my mom was a little nervous.  We met our guide and the other two people on the tour.  Yes, there were only four people on this tour.  (Five, if you count our the Ranger)

The tour started by meandering down a path that was built in the 1930s that descends the canyon about 100 feet.  Once at the bottom of that trail, we encountered our first "obstacle," the 32 foot ladder.
At the top of the ladder, we immediately found ourselves standing in the middle of 13th century pueblo structures.  It was thrilling. 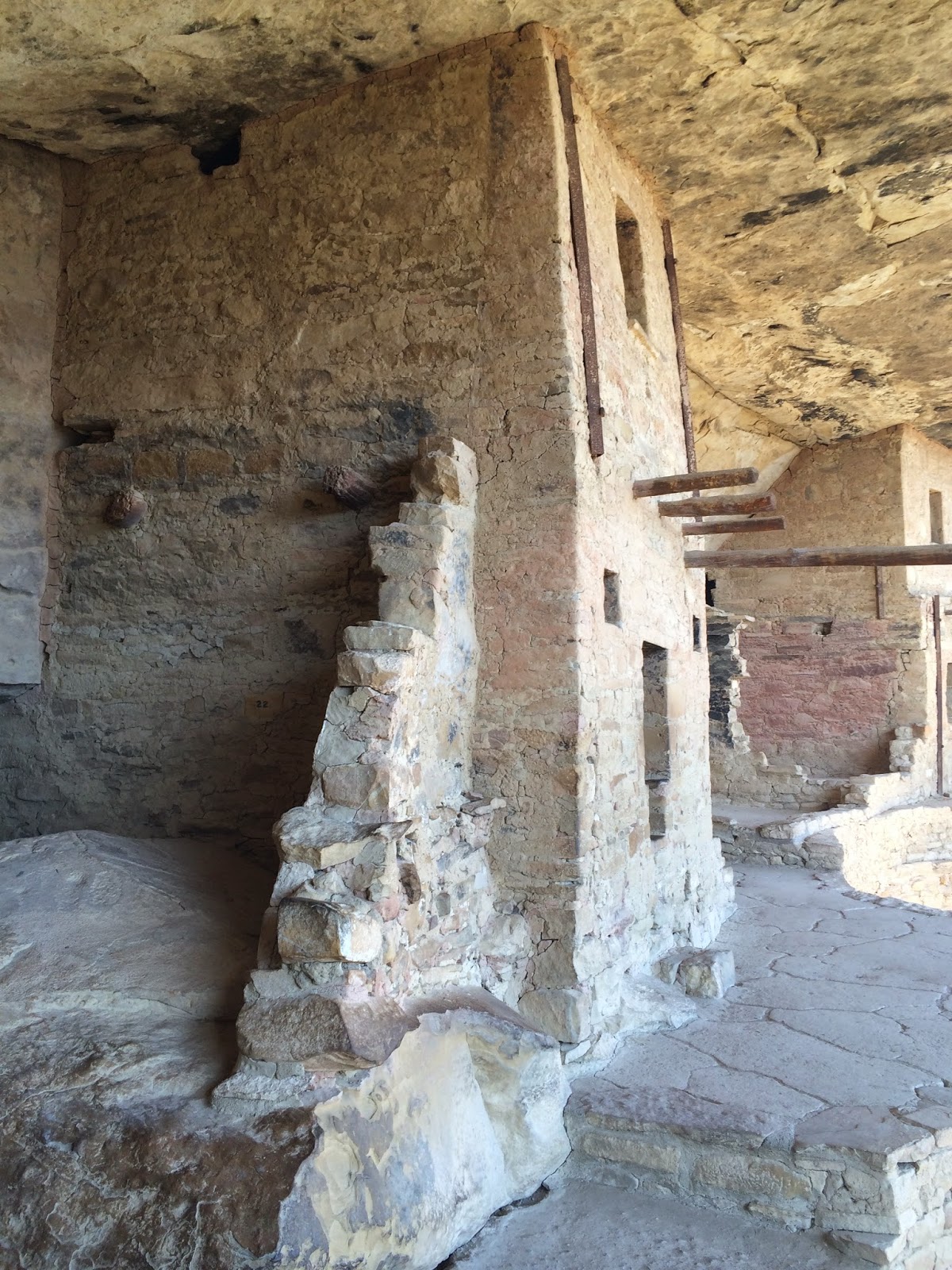 The ranger that led the tour was fantastic and pointed out many fascinating aspects of the Balcony House, including petroglyphs and differences in the construction indicating that certain parts of the structures were built later.  He was also extremely patient with all of our questions and then gave us insight in to his studies and philosophies regarding the archaeologic record of Mesa Verde.

As our tour continued, we encountered a couple additional obstacles including two tunnels.
Before we knew it, we had finished walking through the pueblo structures and it was time to climb back out of the canyon, which required scaling one final ladder and stepping in footholds carved out of the rock with protective chains and fencing.
After we completed our tour, we drove back to the museum so we could walk through the one cliff dwelling that is self-guided, rather than ranger-guided, Spruce Tree House. 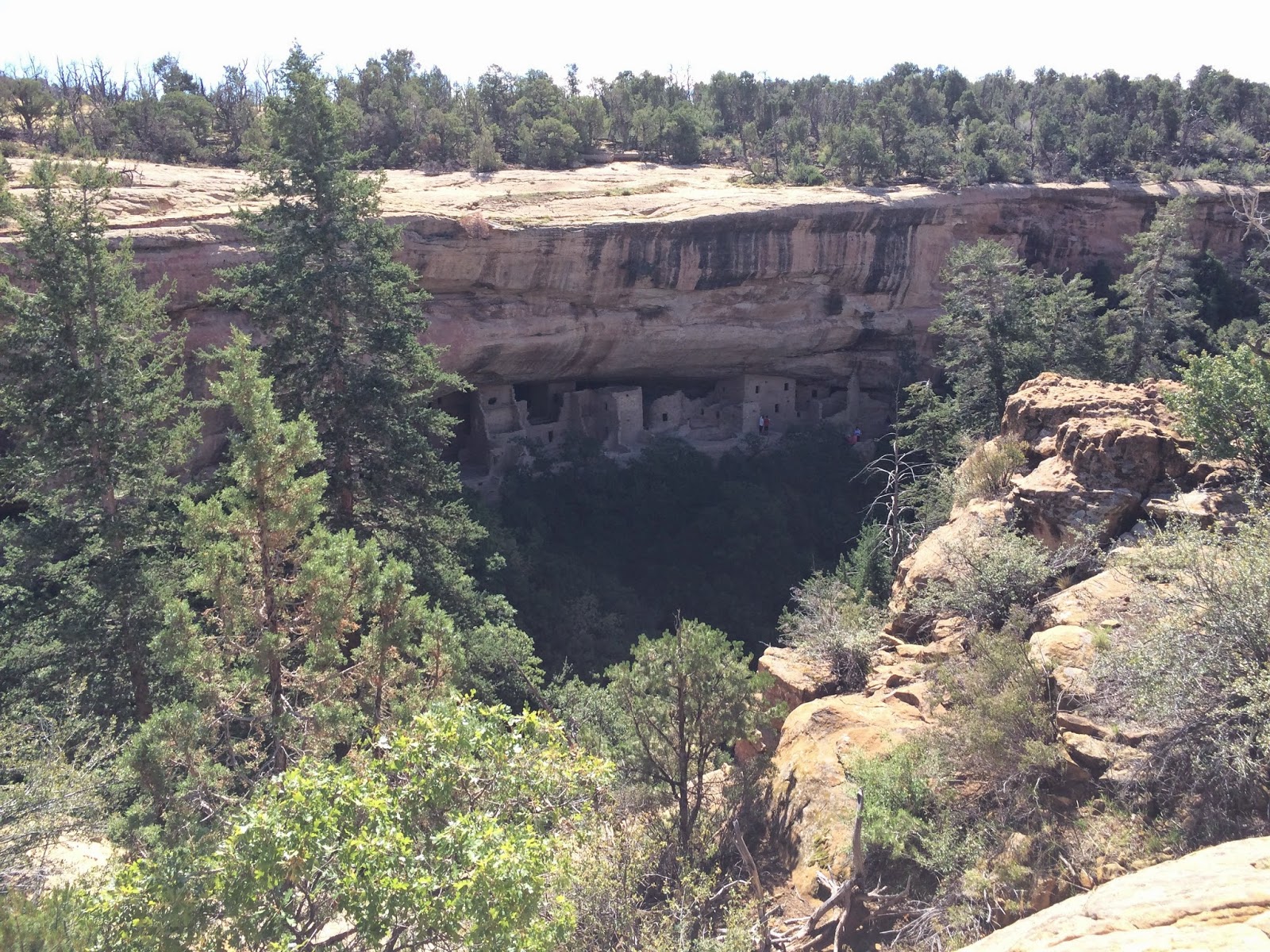 There was an excellent view of Spruce Tree House at the beginning of the trail.  But, you can also take the short, paved trail all the way down.  There is a Ranger at the bottom to ensure that visitors are staying in the permissible areas.  The National Park Service advertises this cliff dwelling as the best preserved, and I'm sure they want to keep it that way.  Spruce Tree House is very much worth a look because they even have an original "kiva" for which the National Park Service has reconstructed a roof.  They also installed a wooden ladder so you can actually climb down in to the kiva!!

And, with that, our morning of playing in cliff dwellings was completed.  We headed back to collect my extremely stressed out labrador and I promised her that I wouldn't leave her for more than 20 minutes at a time until we finished our road trip (3 days from then).  This turned out to be a promise that I could easily keep because almost our entire drive from Mesa Verde to Breckenridge was spent in the rain.  There would be no attempting Quandary Peak, a 14,000+ foot peak near Breckenridge, for us on this trip.

After a few hours of driving, we arrived in Breckenridge, checked in to our hotel and ordered food in the hotel to avoid the rain.  Thanks to our reclusive evening in Breckenridge, the labrador stress level, which had upgraded to extreme in the morning, had once again been downgraded from extremely stressed to very stressed. 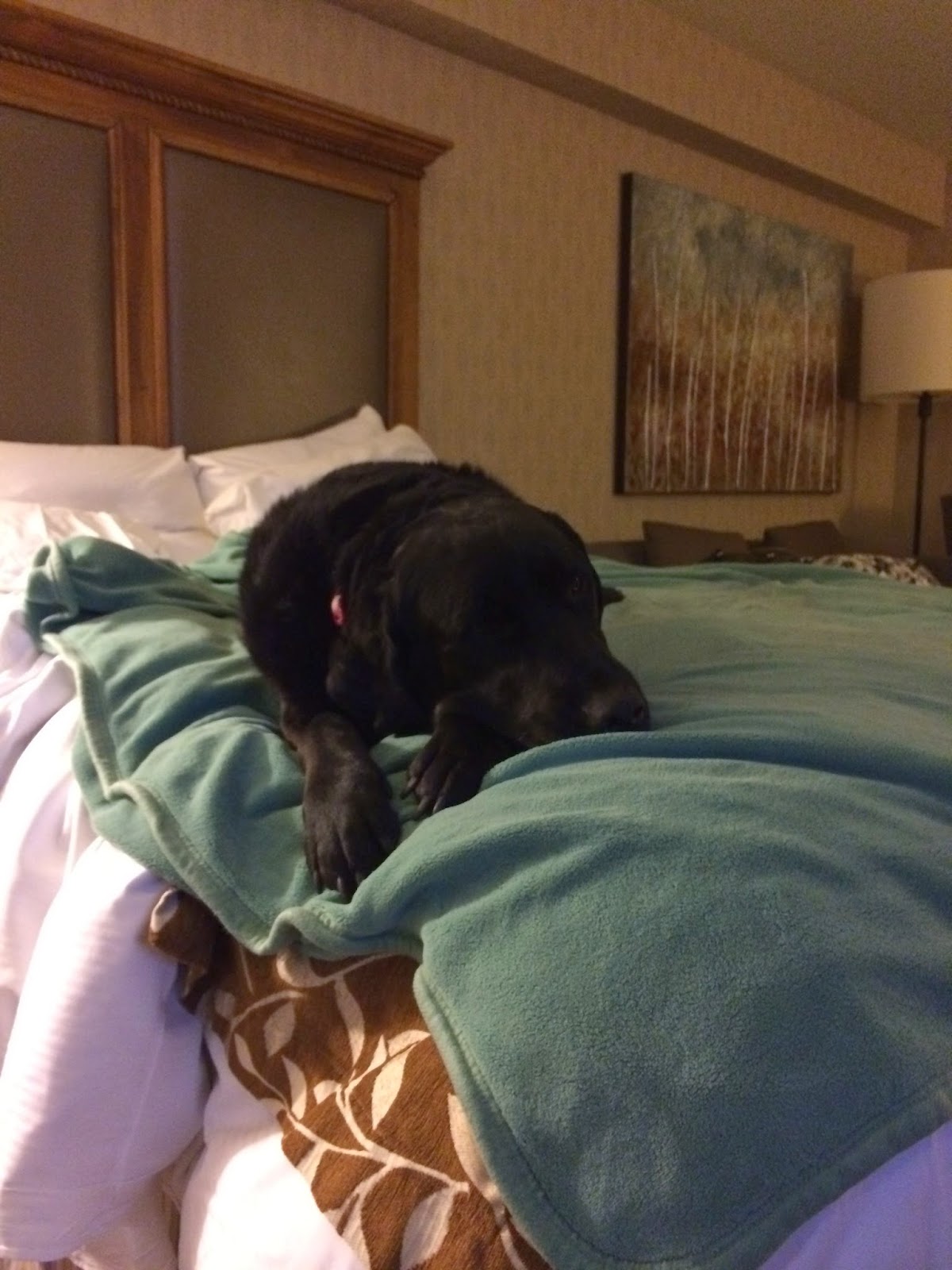