On Wednesday, to get our 2014 started on the right note, Adam and I decided to get up at 7am and drive the 2.5-3 hour drive from Vegas to Zion National Park in southern Utah. (Full Disclosure: I did not stay up until midnight the night before.) 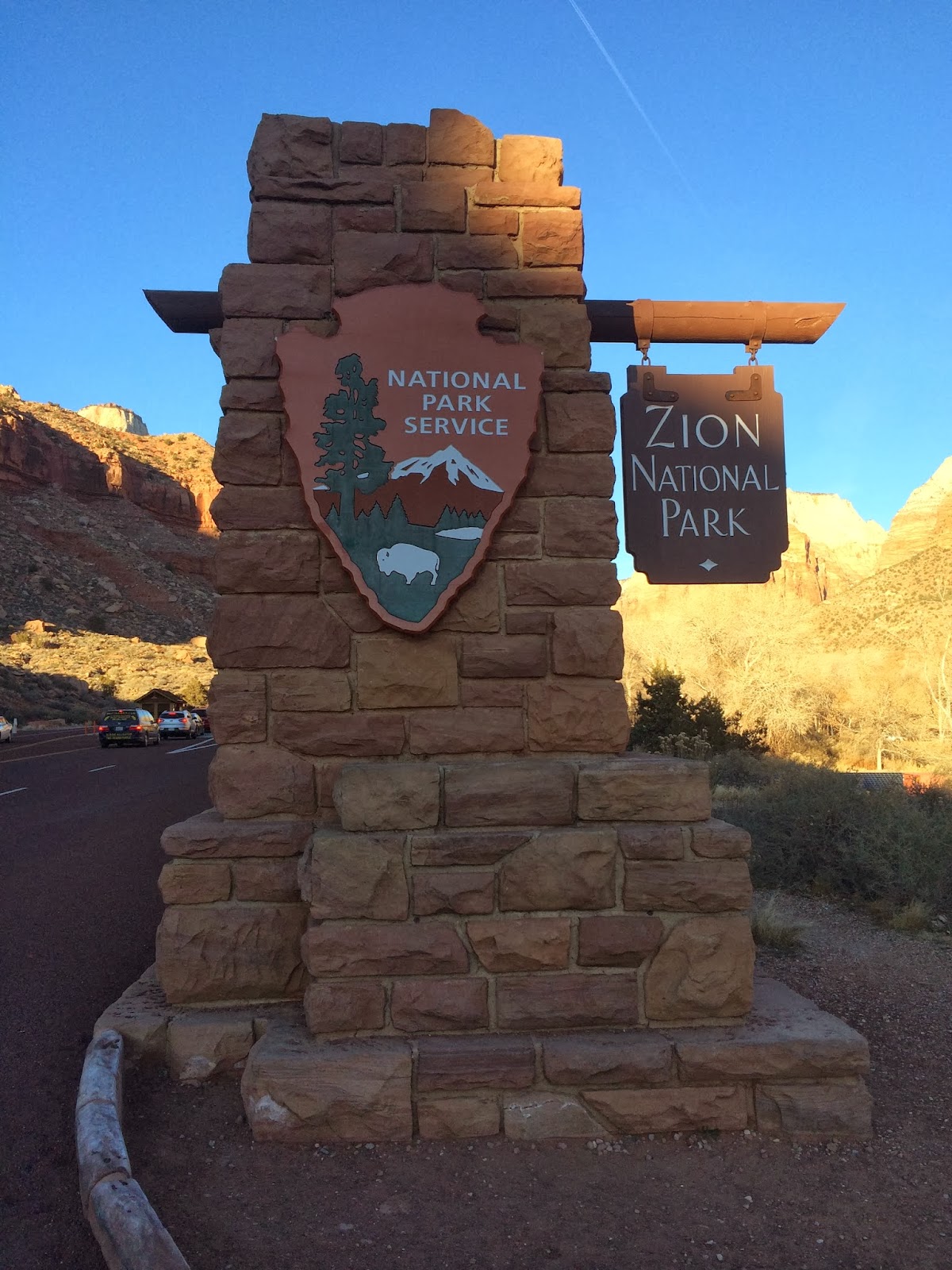 You'll quickly discover from this post that I found Zion to be breathtakingly gorgeous and I couldn't stop taking pictures.
Our plan was to tackle Angels' Landing.  Spoiler Alert:  We didn't make it all the way to the end...we did about 4.6 miles of the 5.4 mile hike.  After reading about it online, I suspected this would be the case.  More on that later.

Before starting the hike, I wanted to drive around the park a bit to see/drive through the 1.1 mile long Zion-Mount Carmel Tunnel.  This tunnel was completed in 1930 and still has no lights inside.  There are some vents/windows that let natural light in from time to time.  Also, the ceiling of the tunnel is so low that tall vehicles, like RVs and buses, must pay for permits to close the tunnel to oncoming traffic and drive through straight down the middle! There are park rangers stationed at each side to stop traffic when one of these large vehicles is coming through.
After driving through the tunnel and then driving back through the tunnel again (the tunnel was about 5 miles out of way), we headed to the Grotto Trailhead, where our hike to Angels Landing would begin. Angels Landing itself is a fin looking rock structure that juts out from the walls of Zion Canyon.  Supposedly, it got its name when a visitor in the early 20th century looked at it and exclaimed that only angels would be able to land on it. 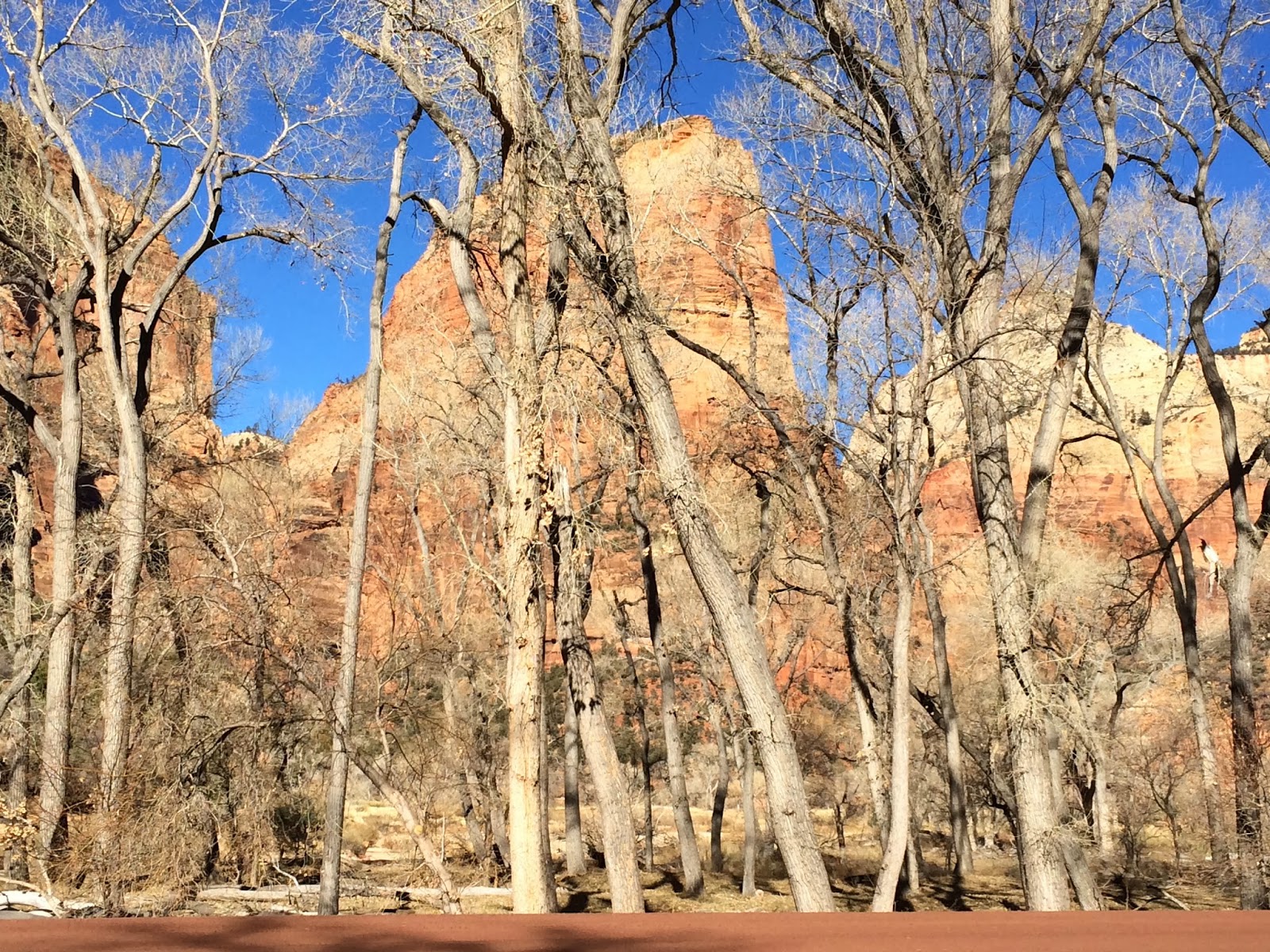 Hiking to Angels Landing is no easy feat.  And, as you'll see, we didn't make it the entire way because of this silly attachment to my mortality that I can't seem to shake...

The trail starts out simple enough by crossing this lovely bridge that goes over the Virgin River, a tributary of the Colorado River that travels through Zion Canyon. 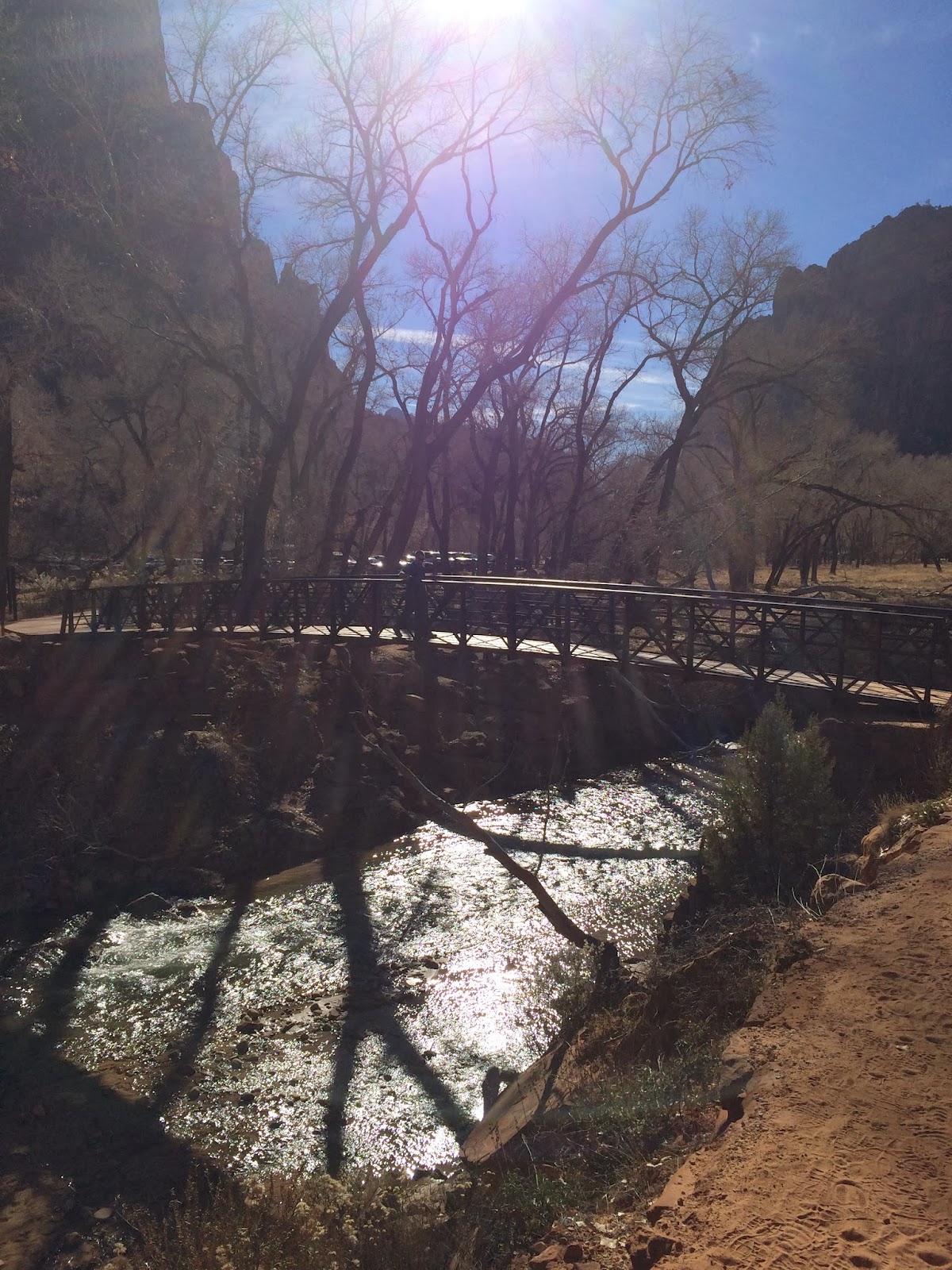 The trail continues along the banks of the river at an very modest incline (almost unnoticeable).  The trail is mostly sand at this point but it is well traveled and very well maintained.   As we hiked this section, we even saw several elk (at least I think they were elk) grazing along the river.  They were completely unbothered by our presence. After about 10 minutes of walking, the trail became paved and started getting more and more steep.  This is where we would check off the first major chunk of elevation increase by winding uphill and then starting a series of fairly long switchbacks.
Once you get to the top of this section, you head back into a narrow canyon that is very aptronymic Refrigerator Canyon; the change in temperature was very noticeable. 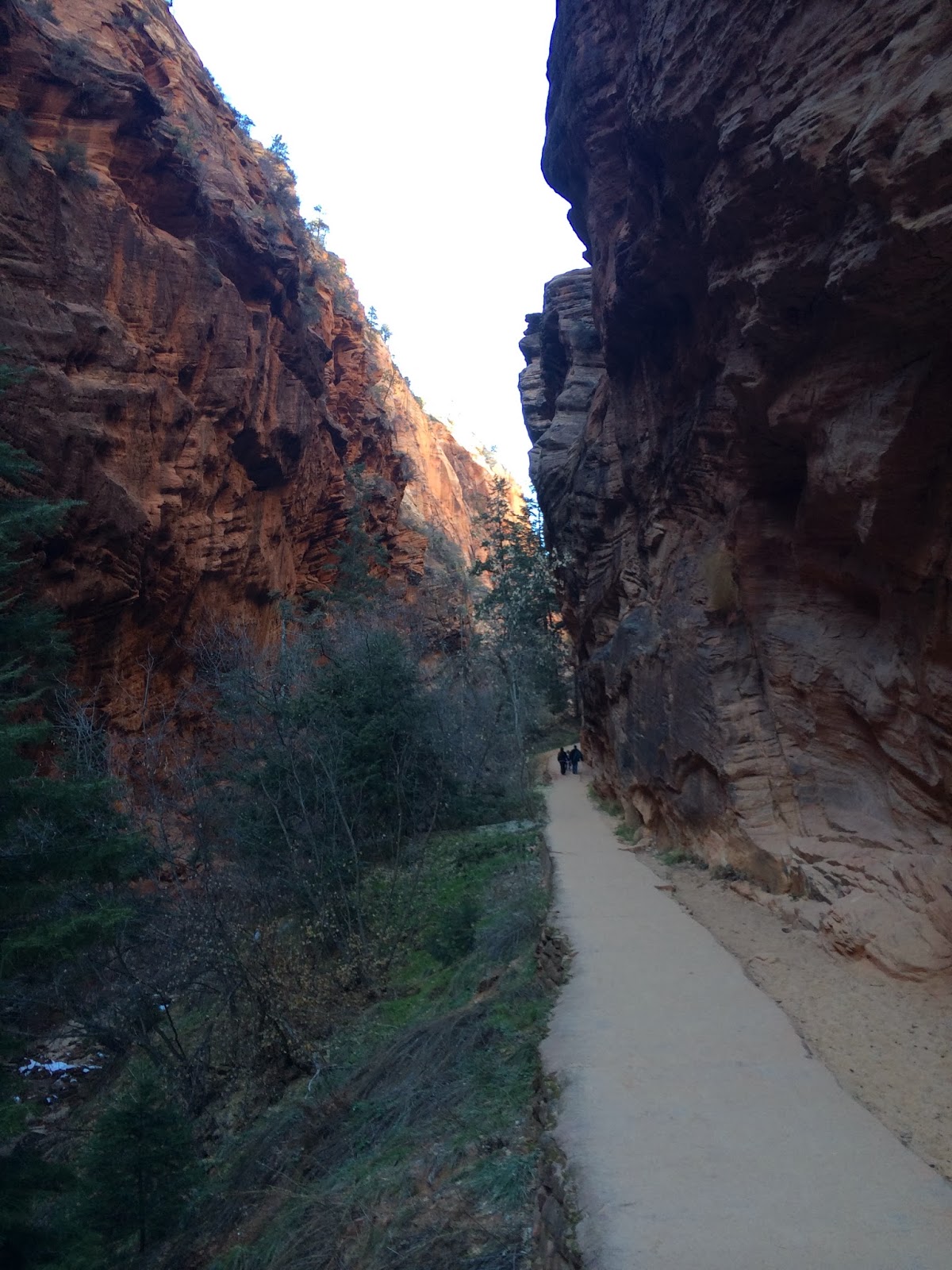 The trail through Refrigerator Canyon is largely flat, which was a welcome break after the previous climb.  It was also nice to recover a bit, because I knew that Walter's Wiggles were still in front of us.  Walter's Wiggles is a series of 21 steep switchbacks that take you up and out of Refrigerator Canyon.
The wiggles weren't as hard as I imagined they would be.  However, I did get nervous about coming back down the wiggles when I saw the snow and ice. 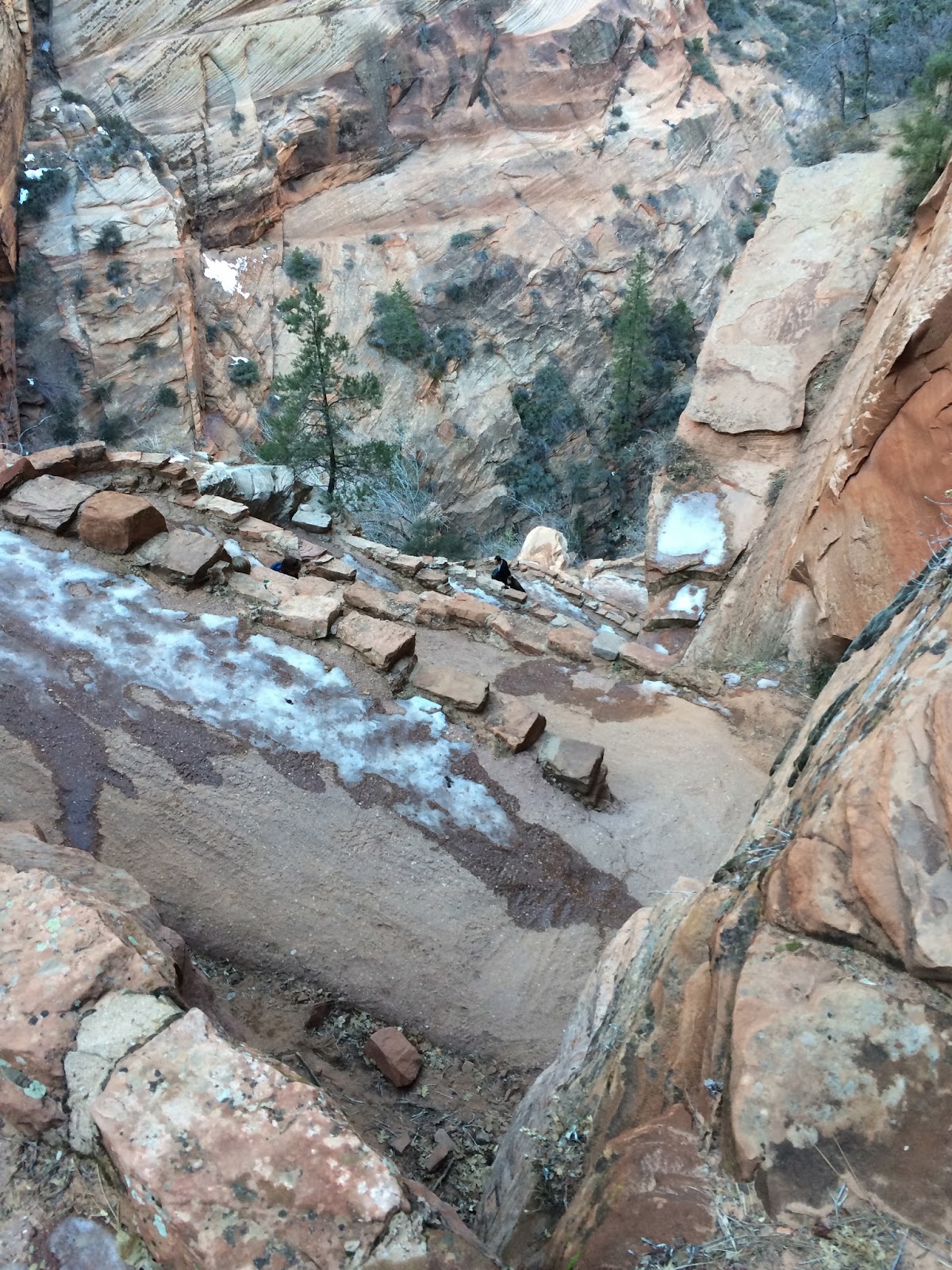 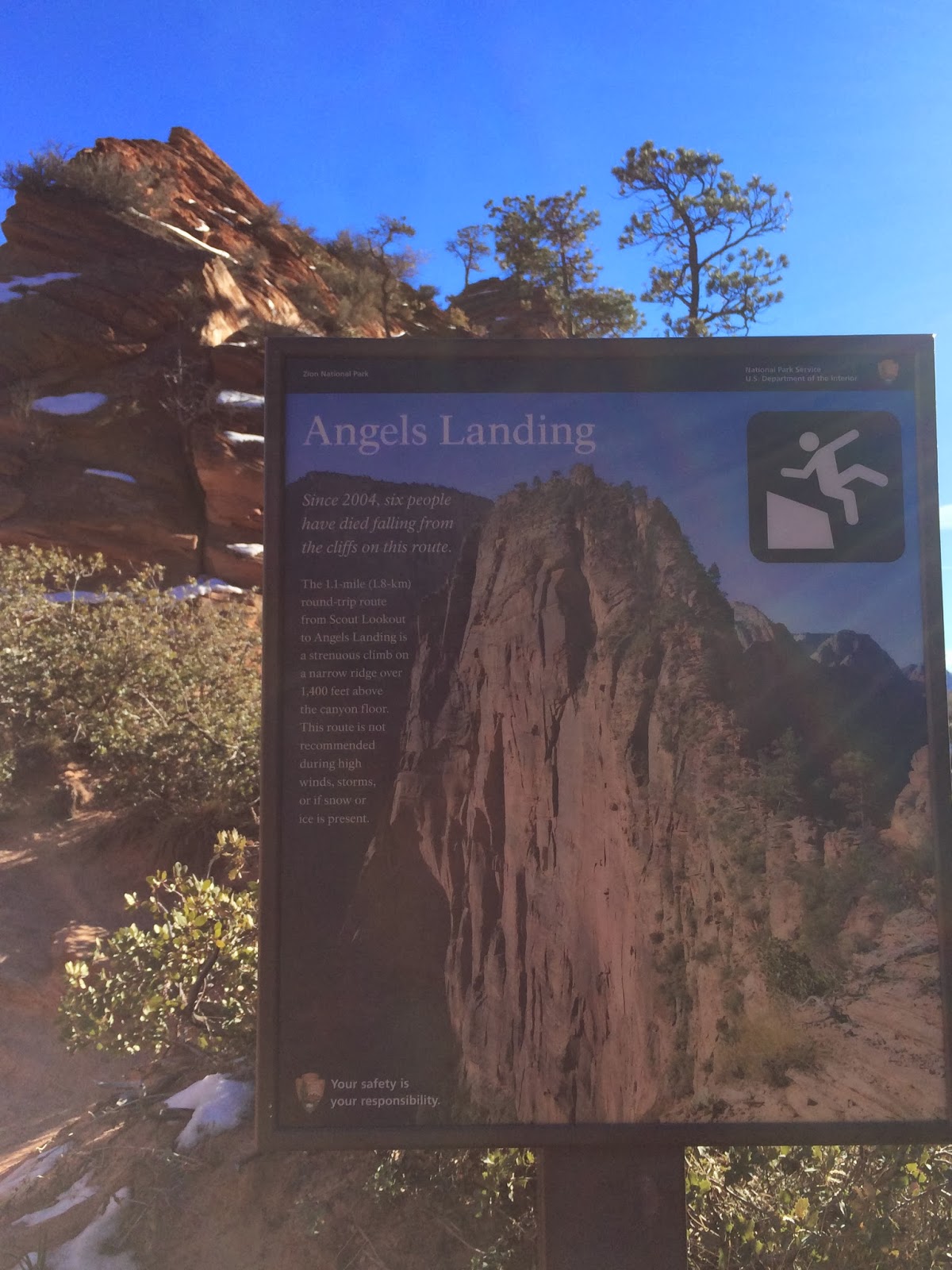 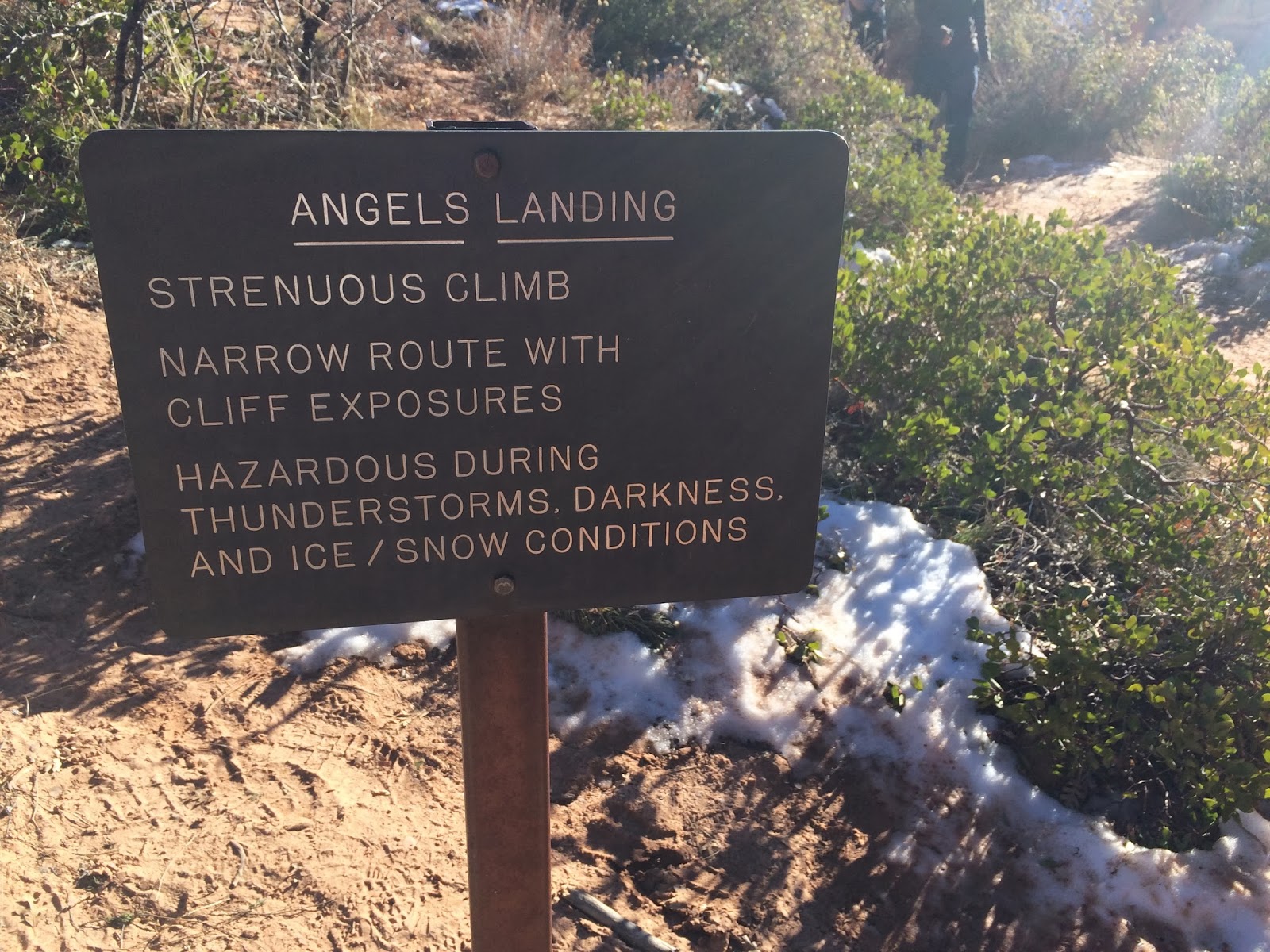 At this point, if you want to continue to Angels Landing, you're going to need to learn how to manage any fear of heights or falling.  The "trail" is extremely narrow in places and you're also surrounded by extreme exposure.  Pretty much every where you look, you see a fatal 800-1200 foot drops.  In order to make this section even remotely safe, the National Park Service installed these metal chains in most places along the trail.  We decided to give it a try, but given the snow and the corresponding semi-slick conditions, I was not optimistic that I would get very far before I freaked out.
In reality, I was pretty much freaking out from the second I first touched the chains.  The scrambling was actually pretty basic, but it is amazing how the threat of a fatal drop-off can change your perspective. 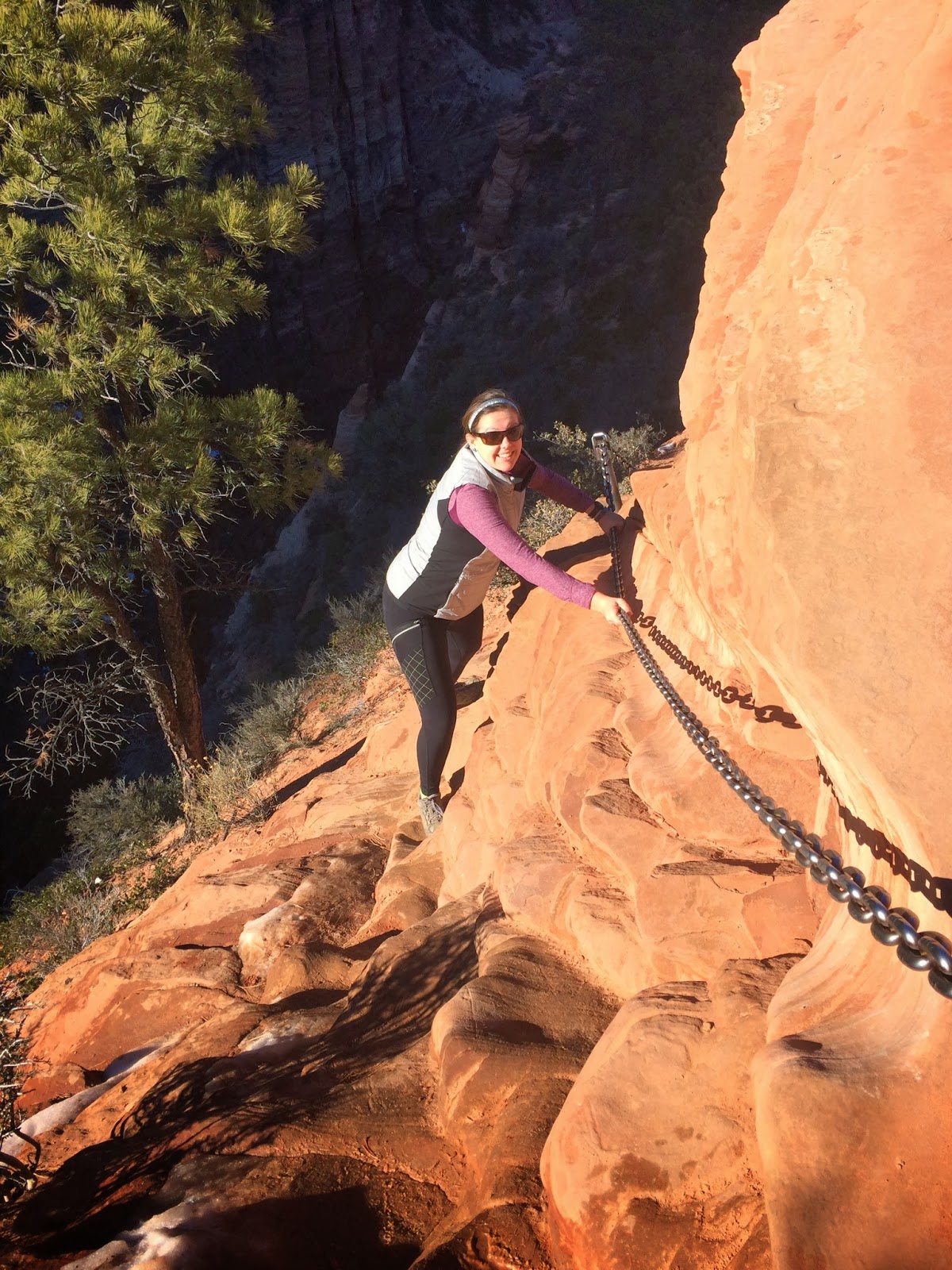 Like I said in the beginning, we did not make it all the way to the end.  We got to a point where we were sufficiently freaked out and decided to head back.

Once we got back to Scout Lookout, we decided to follow the West Rim trial a bit higher and see the view.  I'm so glad we did.  It was breathtaking. 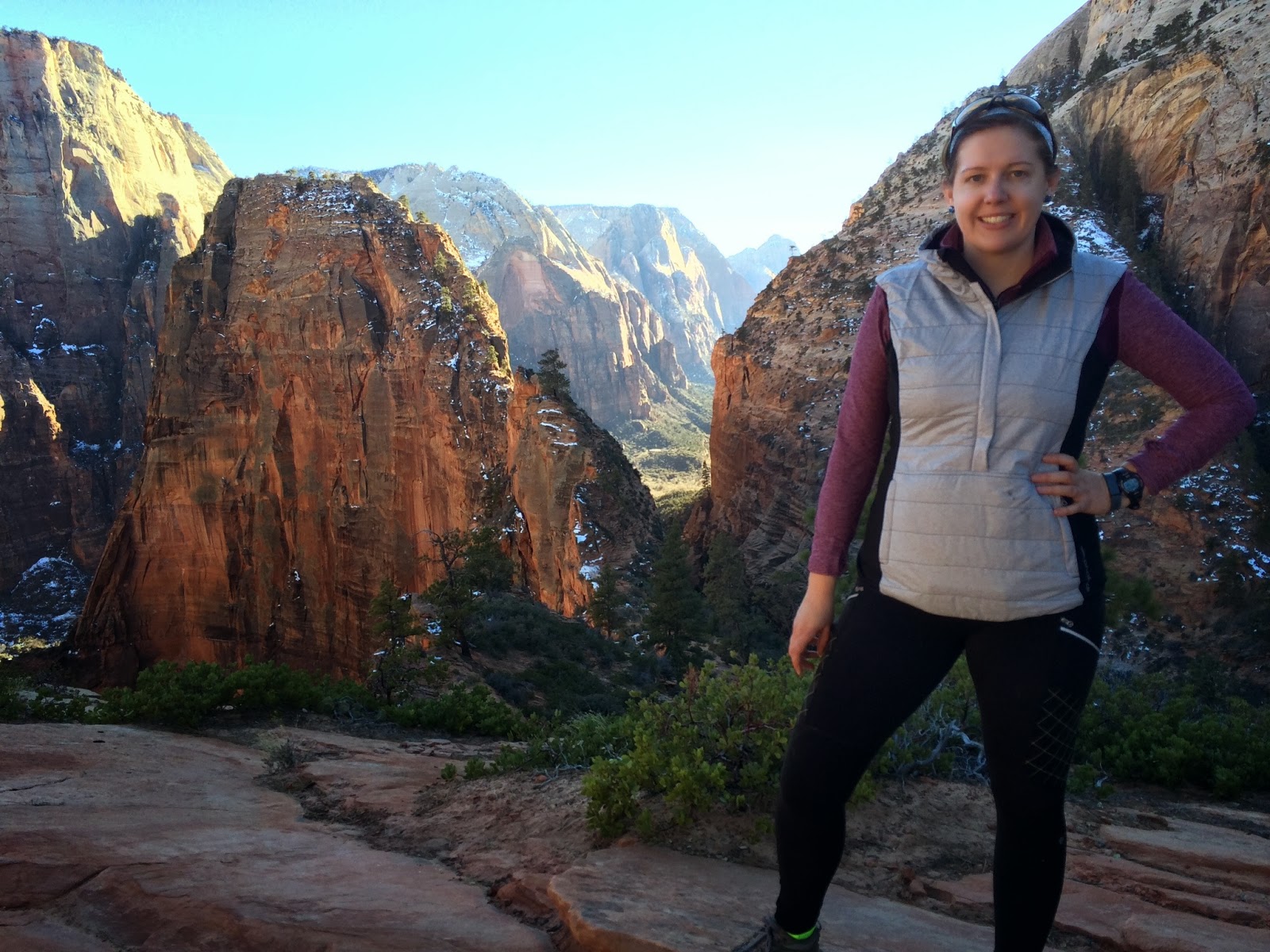 I really liked our perch up on the West Rim, but it was getting chilly and the sun was sinking behind the mountain on the right, so it was time to head back down to the car.  Everything, including Angels Landing, was so beautiful, I just wanted to take it home and hang it on my wall.
We got back to the car close to 4:30 mountain time and headed back toward Vegas.  However, we were starving and St. George (about 45 minutes from Zion) is home to the closest Cracker Barrel to Vegas...so, yeah, that happened.

It was an amazing day trip and I feel confident suggesting that every single person that reads this should go to Zion.  Even though it was a little chilly, I highly recommend going this time of year too.  Zion is so popular that during the peak months (April-November, I think), you can't drive your car back to through the scenic highway to the trailheads.  Instead, you have to park and ride a shuttle to all the sights.  Because January is part of the off-peak season, the trams/shuttles weren't operating and visitors were permitted to drive the scenic highway and park at the trailhead.  So much better.