That time I went snowshoeing in Mount Rainier National Park!

Okay, just one more post that I should have posted more than a week ago, then I promise I'll shut up about our trip to Washington for Christmas.  (yes, yes I know, Christmas was nearly two weeks ago)

I knew that I wanted to get some sort of hiking in while we were in Washington, but I'm not that familiar with the area, so I started my research with the National Parks.  My quick googling turned up two excellent options: Olympic National Park and Mount Rainier National Park.  Ultimately, a couple of things led me to settle on visiting Mount Rainier.  First, it was about half the distance from our hotel compared to Olympic.  Second, duh, Mount Rainier is beautiful and iconic.  Finally, I read about a fun opportunity to go snowshoeing, something I've always wanted to try.


Warning:  this is a picture heavy post.  I had a hard time limiting myself to just a few because I'm just obsessed with the beauty of Mount Rainier
We left our hotel fairly early, at least for a vacation day and arrived at the entrance to Mt. Rainier National Park around 9:00am.  I had no idea until we visited that Mount Rainier was one of the first National Parks.  More precisely, it was the fourth national park, established on March 2, 1899. 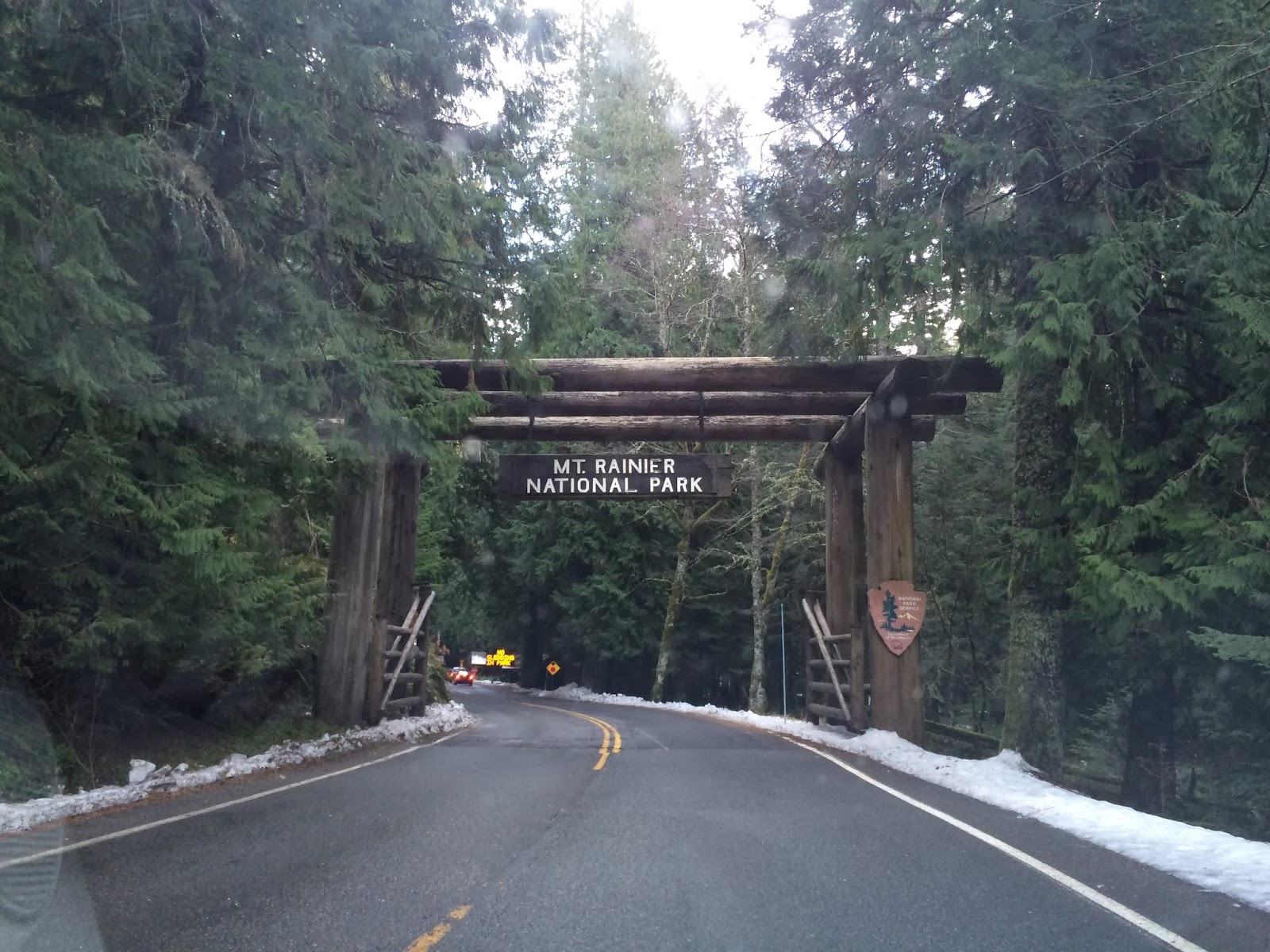 It was still a decent drive from the entrance of the park to the visitor center.  But, it was the most beautiful drive I've been on in a long, long time.  First of all, GREEN!!  Second of all, SNOW!!  Two very exciting things that I love and don't get to see very often now that I live in Vegas.  In addition, we drove by beautiful waterfalls and took in breathtaking vistas of Mount Rainier itself. 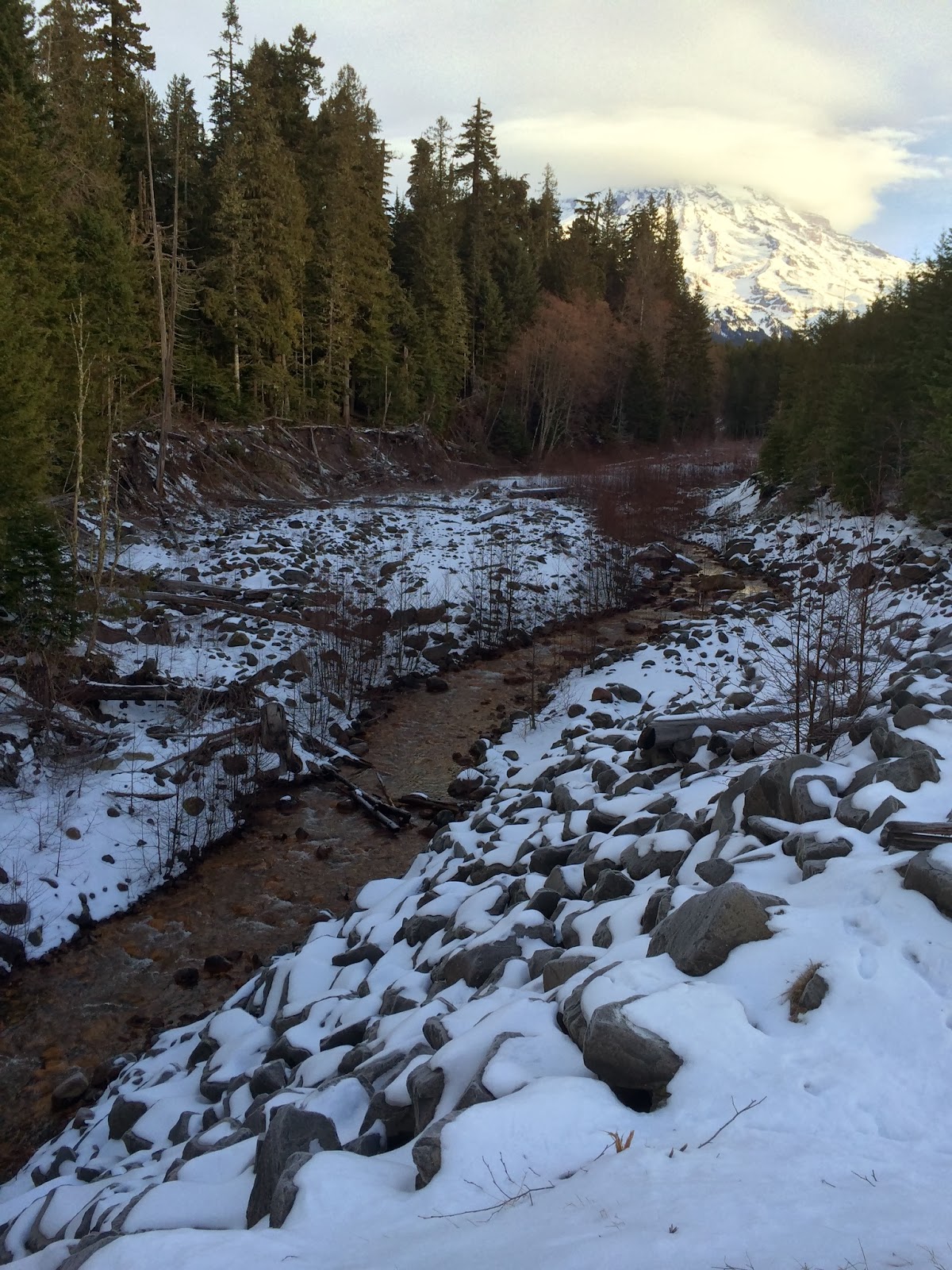 Our ultimate goal was the Visitor Center at Paradise located at an elevation of 5400 feet, which meant we had some serious climbing to do in the car with some serious snow along the way.  The temperature was just slightly over freezing, so the roads weren't terribly slippery.  Nevertheless, this sign made me a little nervous when coupled with the snow, etc. 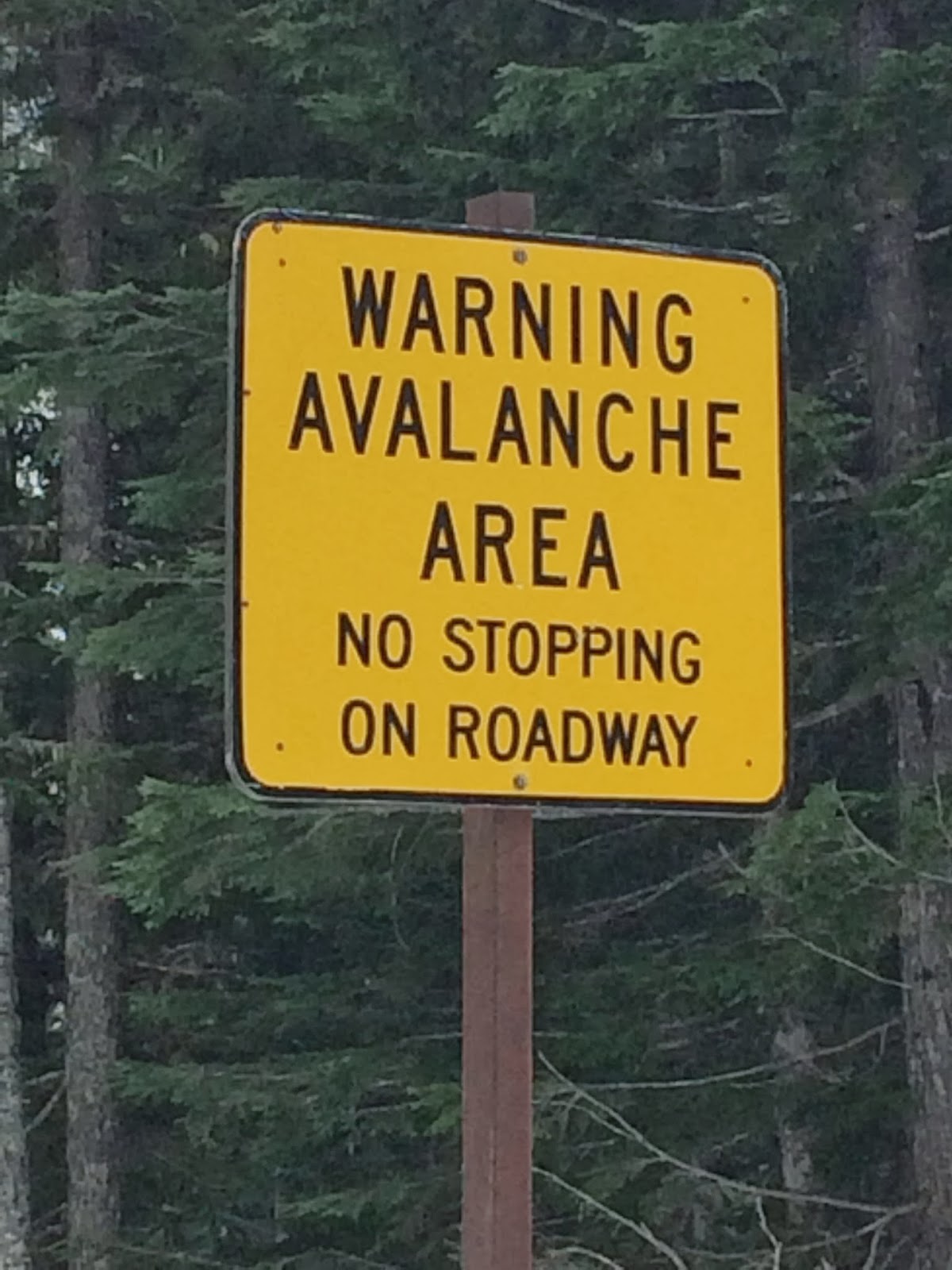 But, never fear, we made it to our destination.  The parking lot was covered in a sheet of ice, which even made our car slide when it was in park before we turned on the emergency break.  Once we survived the parking lot, we could turn our entire focus to how beautiful and charming the visitor center was. 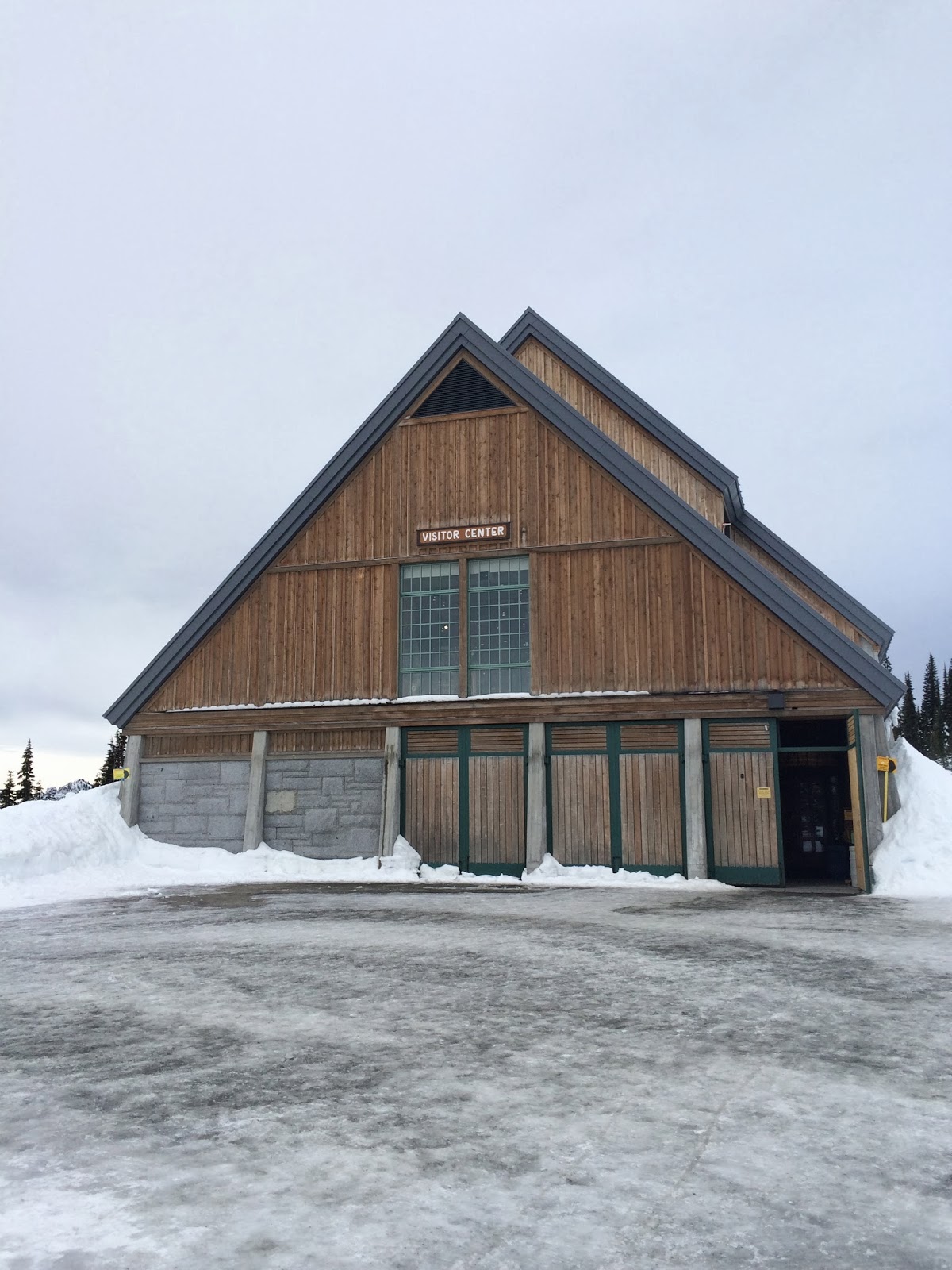 And, the inside was even more lovely than the outside.   I loved the high ceilings with the exposed rafters and the openness of the entire place. 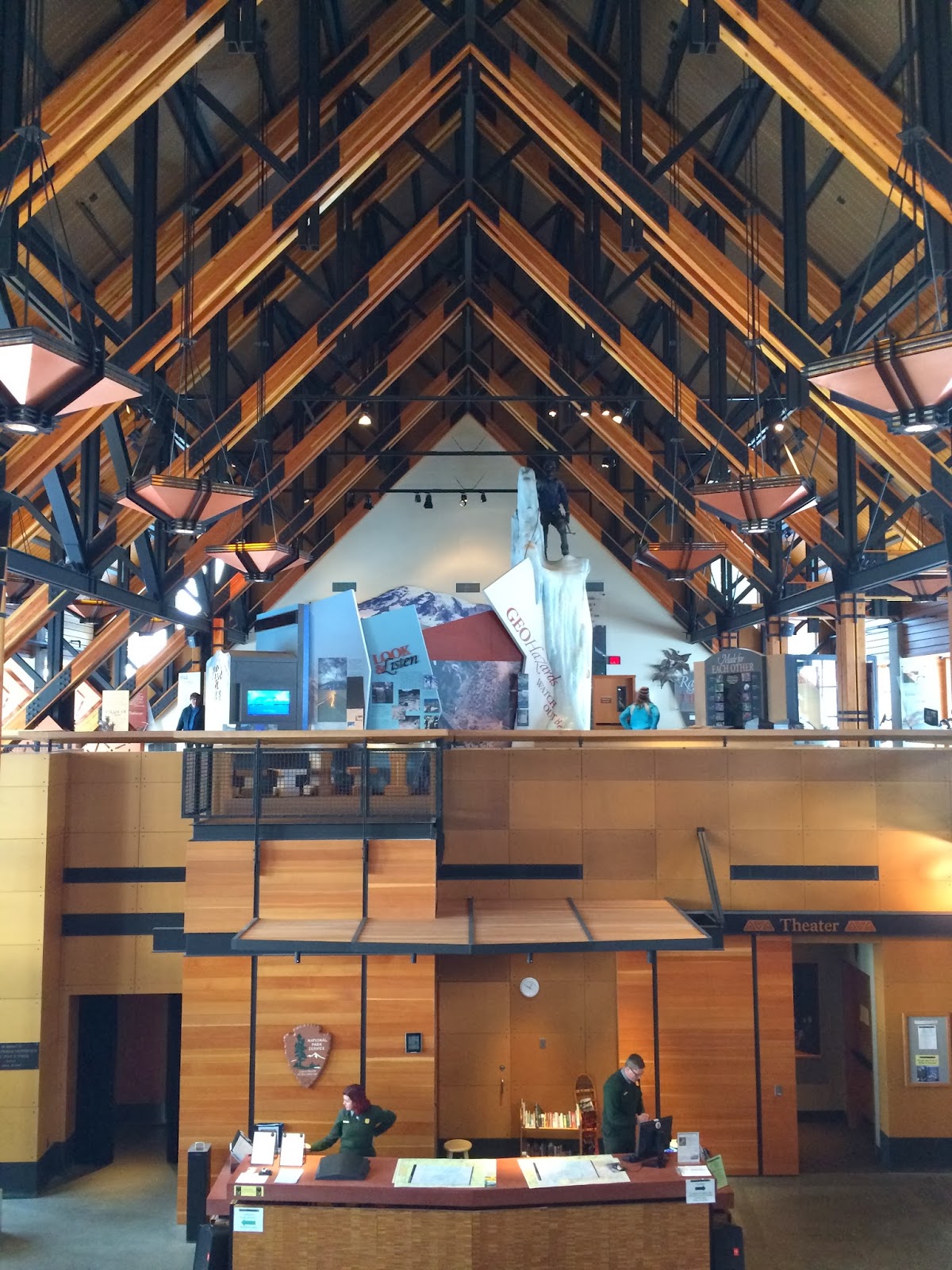 The bottom floor primarily consisted of the Ranger station and a cafeteria, this came in handy after snowshoeing b/c we were starving!  The second floor was sort of loft style and housed a gift shop and a small museum about the mountain.  I visited the gift shop and purchased a lovely mug and my National Parks Passport.
We arrived with plenty of time to sign up for the snowshoe hike.  In fact, I think I was the first to sign up!  Let me first say, the snowshoeing was excellent!  For a donation of $4/person, the park provided snowshoes and a guide that led you through the sub-alpine forest and discussed the plant life and how it adapts to this harsh climate.  The hikes are limited to 25 people and they only do two Ranger guided hikes per day.

Snowshoeing was actually not as challenging as I expected it would be.  I'm pretty uncoordinated, so I legitimately expected to fall many times.  Surprisingly, I fell only once and that was when I was trying to be cool, but I just ended up displaying how very not cool I am.
I will admit, that the snowshoeing was likely easier here because the 5 feet of snow that make up this trail is already pretty packed down, which makes for a smooth walk.

The trail took about 2 hours and we traveled a total of 1.5 miles and stopped every few minutes to learn about the area around Mount Rainier.  In summary, we burnt calories, learned a little ecology/botany, and looked cute in our winter coats, boots, gloves, and hats. 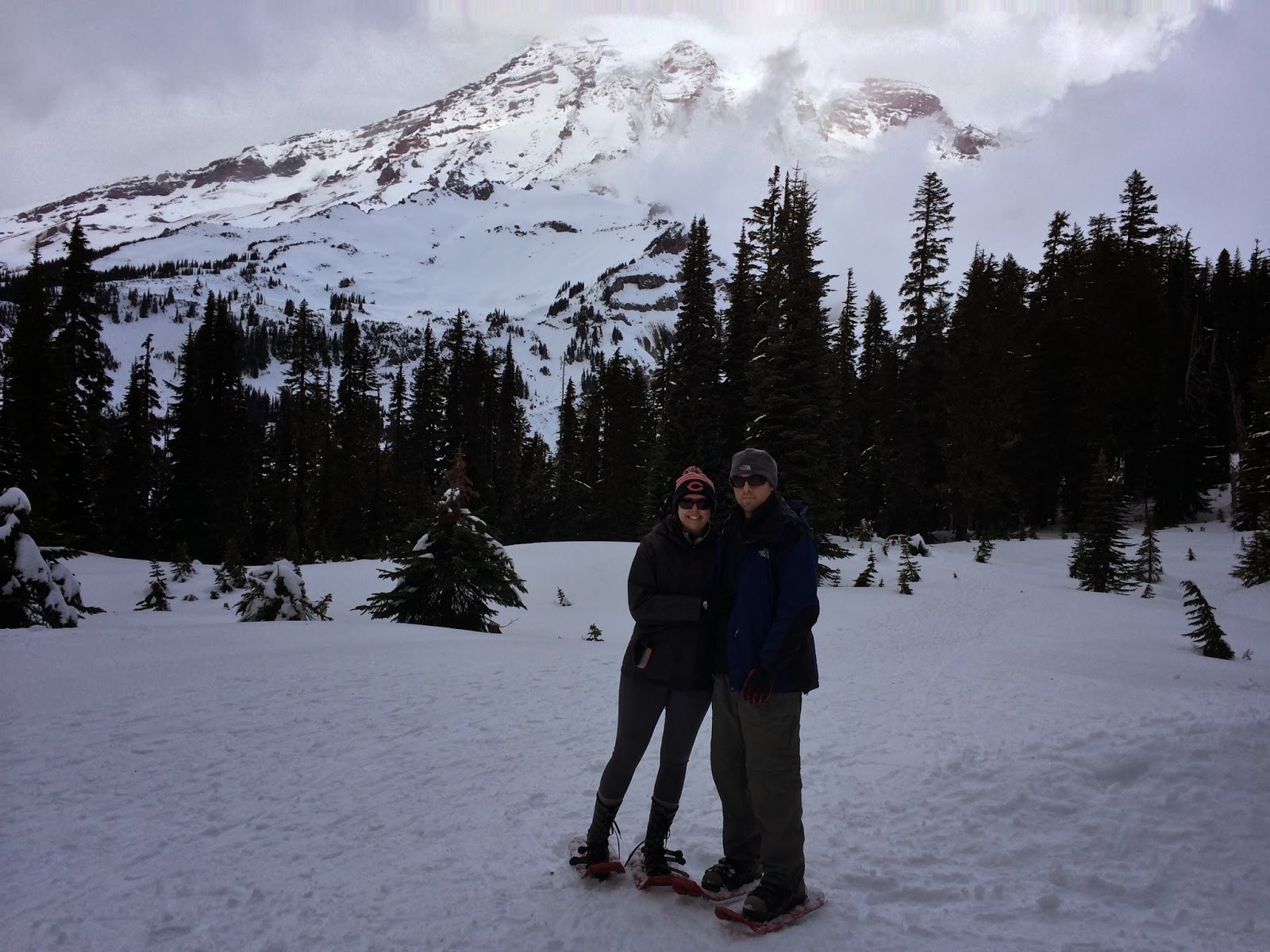 Sadly, our snowshoeing came to an end and it was good timing too because the clouds started rolling in and the snow started to fall.  We headed in doors, grabbed a snack, and started the drive back down to Seattle.

Remember that lovely photo with the stream and Mt. Rainier that I posted at the beginning (the third image, to be exact)?  Yeah, this is that very same creek, but I took the picture several hours later on our way out of the park. 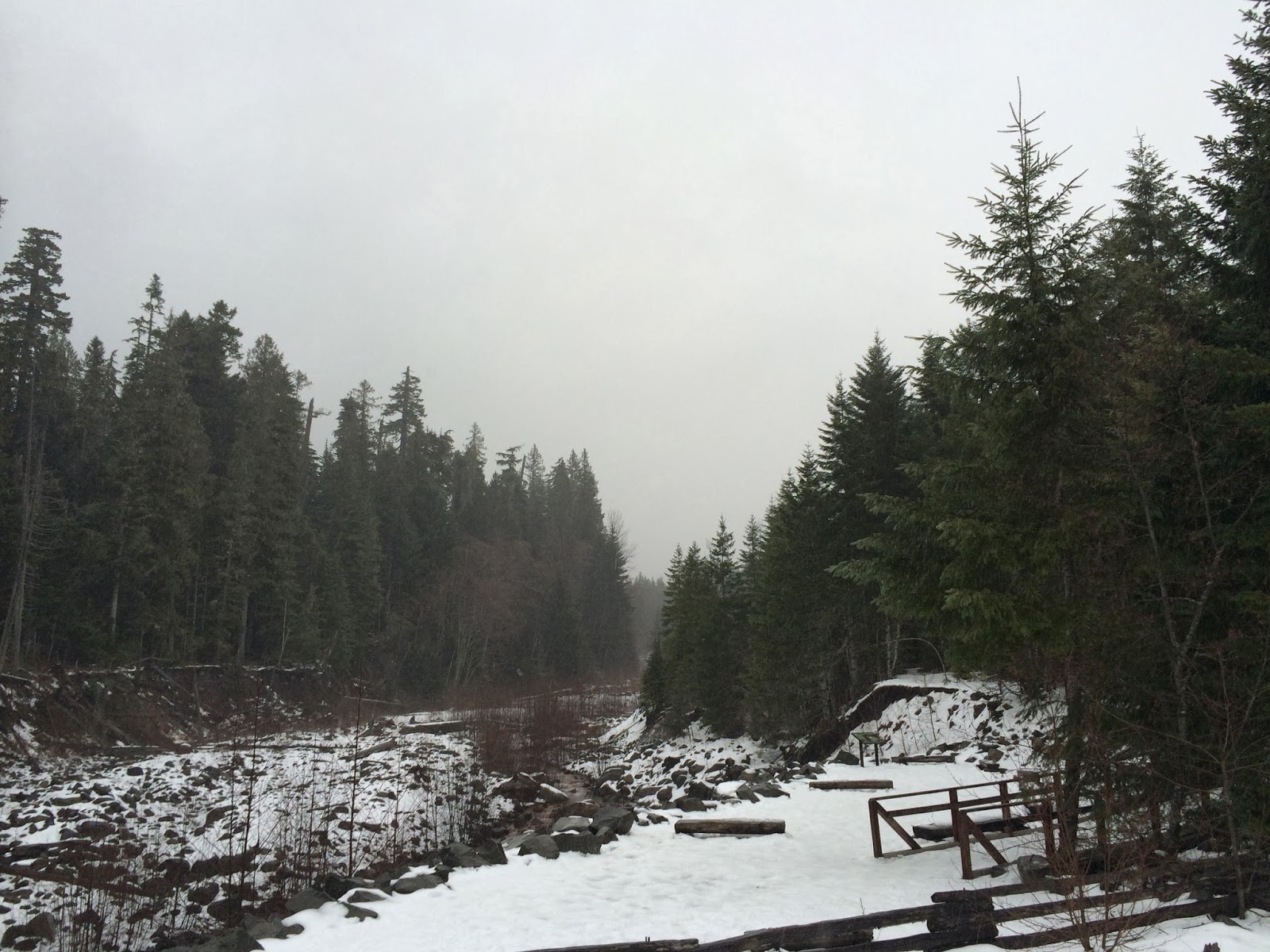 The cloud cover had gotten so thick, you'd never be able to tell there was a giant 14,000+ foot tall mountain hiding back there.  Or, as Adam's wonderful grandfather would say, I think they took the mountain out for cleaning.

I was sad to leave Mount Rainier, but I have plans to return in the not-so-distant future.  I'd really, really  like to backpack the Wonderland Trail, a 93-mile trail that circumnavigates the base of Mount Rainier.  If I have time between leaving Vegas and heading to DC, that might be my plan.

Leaving Mount Rainier wasn't a total loss because that meant I could go back to my sister-in-law's house and cuddle with this adorable dude. 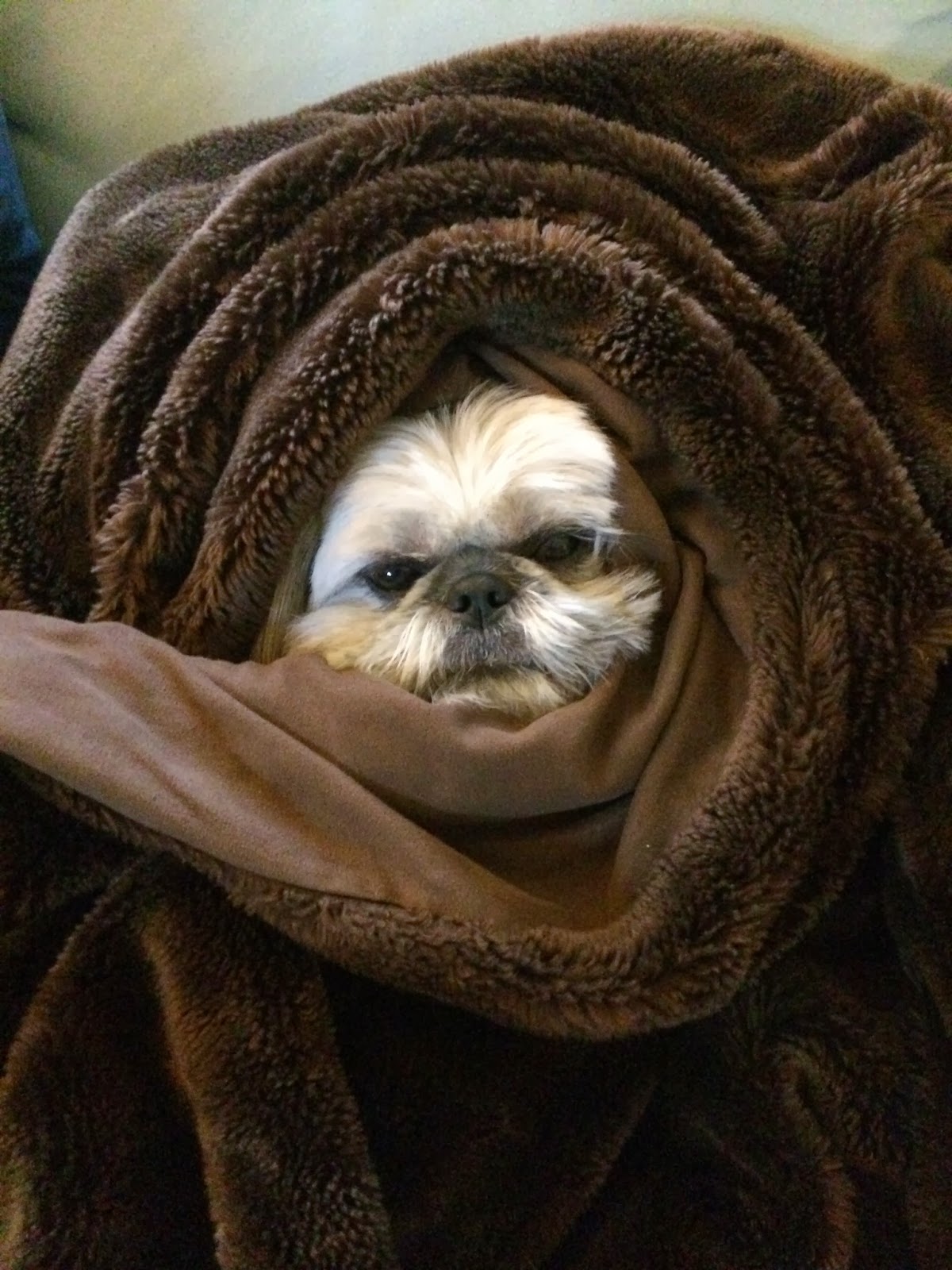 I know, I know...this picture is random and has very little to do with the subject of this post.  But, I love this guy and doesn't he look like an Ewok here?  God, I love Star Wars.

Anyway.....I promise that soon I'll start posting about the present and stop reliving vacations I took several weeks ago, but I really wanted to post about my snowshoeing and to tell anyone who will listen to definitely try it out!  I'm going to be doing more in the near future because my awesome parents purchased a set of snowshoes for me for Christmas (they just didn't arrive in time for me to take them with me to Seattle...thanks a lot UPS)
Posted by Unknown at 4:30 AM