I decided that I was disappointed about not keeping up with posting pictures and a bit of a narrative about my various outdoor adventures.  So, I'm going to attempt to recall what I can and hopefully backdate the posts for posterity.  I'm more than 15 months behind at this point....we'll see how this goes.

First up:  That time back in 2014 when I celebrated my 30th birthday with some of the best friends possible doing my favorite thing (hiking).

In my quest to get as close as possible to finishing all 52 peaks before moving from Vegas, next up was Eva's Tower for the 10 of Clubs.  The hike is 5 miles (round-trip) with about 2000 ft of elevation gain.

The starting point for this Red Rock Canyon hike is at an unmarked pull-off before you reach the Pine Creek trailhead.  We began with an approach hike across the desert that seemed to be of average length (~1-1.5 miles). 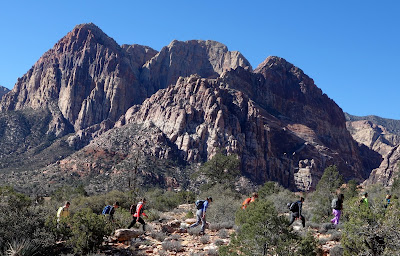 After the approach hike, the fun began with some great scrambling.  The route travels through a rabbit hole (which was a perfect opportunity for a group pic) 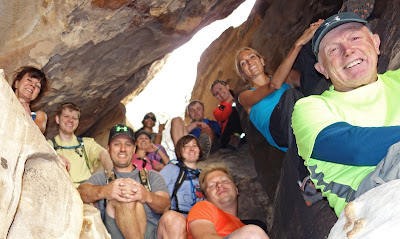 I was intimidated when everyone was talking about this ledge, but it ended up being almost nothing.  The "ledge" was wider than I expected, had great handholds, and the drop off didn't seem all that far.
After the ledge, we had to climb a 10-ish foot tall chimney: 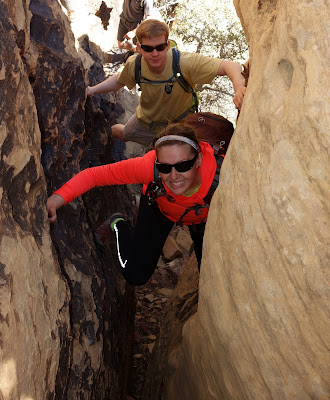 And, after 30-45 minutes of additional rock scrambling, I found myself at the final scramble: the summit block. 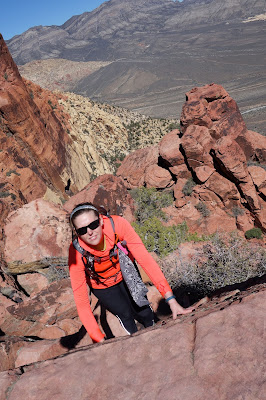 On this day, I figured out that one of the best thing about having friends that have far superior athletic abilities is that they can surprise you with a birthday celebration at the peak!
After lots of snacks and the obligatory peak photos, it was time to descend.  But, because it was my birthday, we had decided to descend a different route that entailed a rappel!  It turned out to be a little bit of an underwhelming rappel and we probably could have down-climbed it, but we brought our harnesses, so we used them. 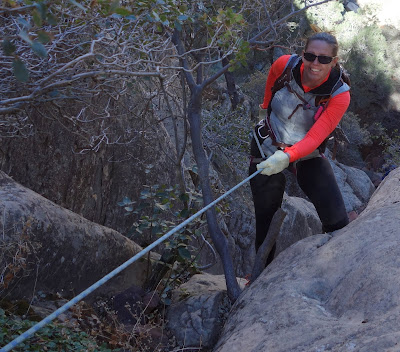 It was actually Adam's first rappel and he was a rappelling champion. 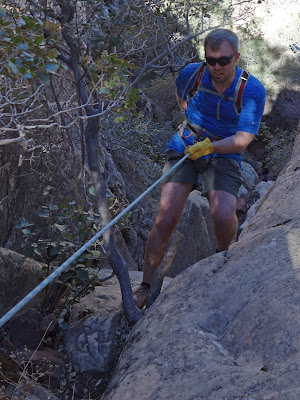 The rest of the descent was pretty noneventful.  But, once we returned to our cars, the fun was not over.  My wonderful friend Jenny hosted a breakfast for dinner (my favorite kind of dinner) birthday celebration at her house! I'm pretty sure that I'll remember this birthday as the best one in recent memory for many years.  I felt really lucky to have an awesome husband (who told Jenny how much I love funfetti cake) and such amazing friends!!
Posted by Alaina at 5:51 PM