Like many peaks in Red Rock, there are multiple ways to get to Lost Peak.  And, as with most of the peaks in Red Rock with multiple routes, I chose the wimpy least scary route possible.  The alternate route is called "Lost with the Ledges."  I've seen pictures of those ledges and they definitely don't look big enough to even deserve to be called ledges.  The only downside to choosing the "safe" route is that the pictures aren't exactly the most exciting pictures you'll ever see. 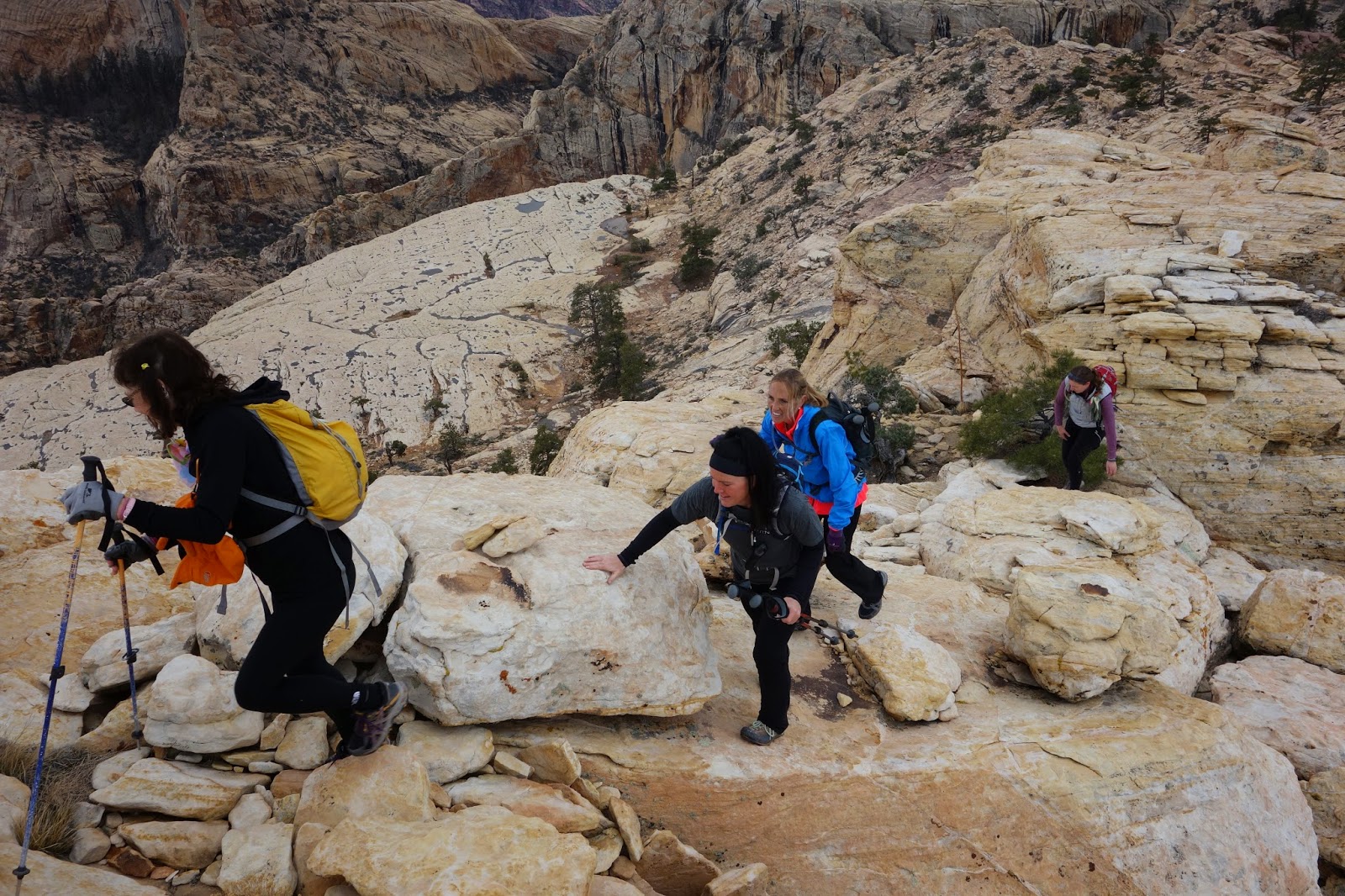 All that being said, this is a great hike, especially when you're looking for something a little less technical.  I've actually done most of this hike previously when I got the card for North Peak in February of 2013.

The trailhead for this non technical route is located approximately 2 miles up Rocky Gap Road inside Red Rock National Conservation Area.  If you're not familiar with Rocky Gap Road, this means that you'll only be able to reach this trailhead by foot or in a high clearance, 4-wheel drive vehicle.  Once we found the right place to start, we just hiked up the unmarked but very well defined trail and trekked up to the ridge line.  When we started getting near the ridge line, the route became less of a dirt path and required more following cairns up the sandstone slab.  The route finding wasn't that difficult because we were literally aiming for the ridge.

After we made it to the ridge, we simply traversed to the south and a little east along the beautiful ridge line.
The views from the ridge line and the peaks (we did both Lost Peak and North Peak) were stunning!

After traversing the ridge line, we did a teensy bit of scrambling to make it out on to Lost Peak (yay! my 27th card!!) before heading towards North Peak, the tallest peak in Red Rock.  Lost Peak is sometimes referred to as Lost Creek Peak, and on our quick jaunt over to North Peak, it wasn't very difficult to find lost creek. 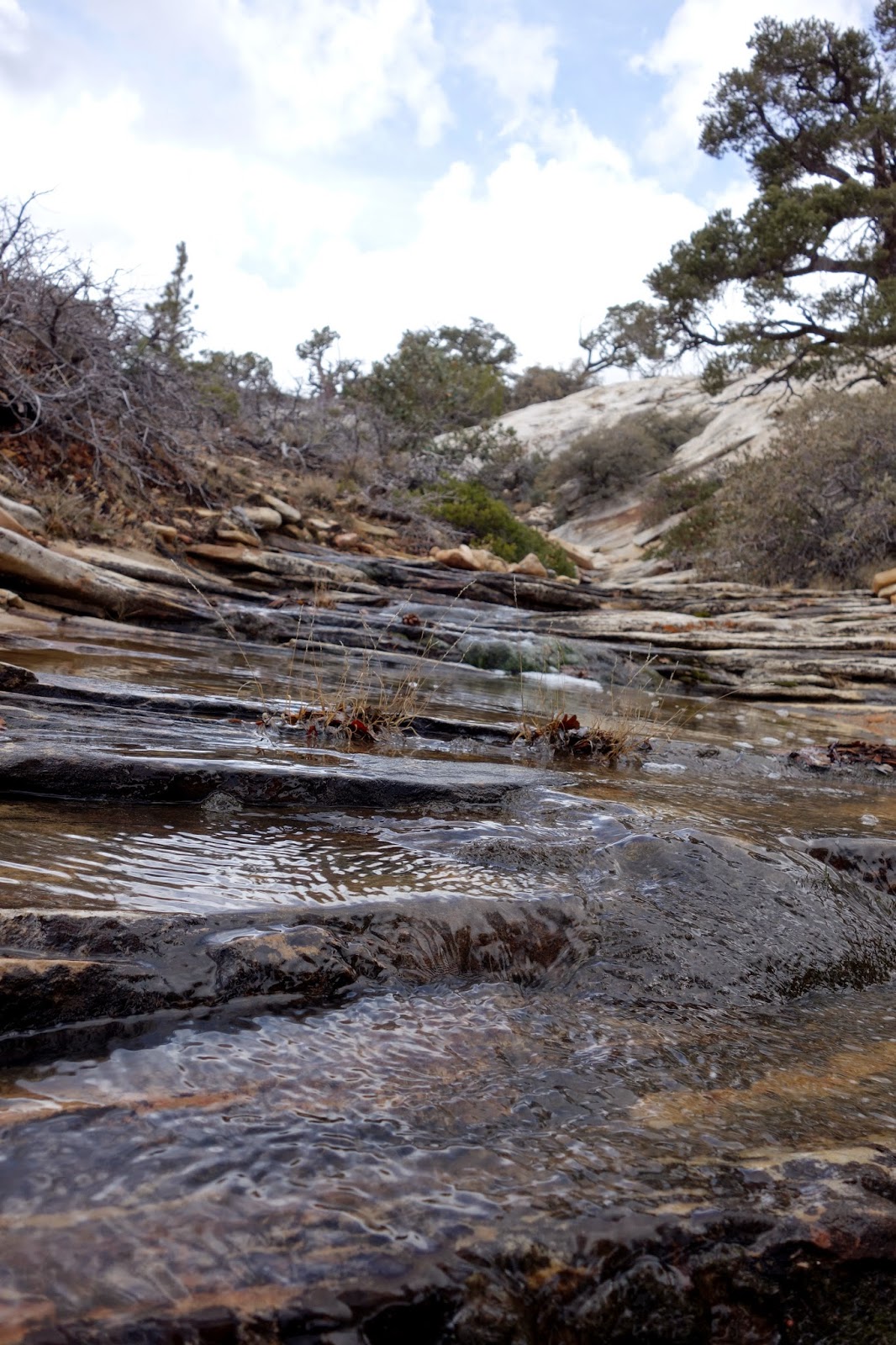 Okay, this is where this post gets a little bit ridiculous in the length department...  After we got back down to the cars, a couple of my very good friends agreed to teach me how to rappel!!  It's been six months since I first learned to rappel and it still scares the crap out of me, but I'm glad that I have a few rappelling experiences under my belt. 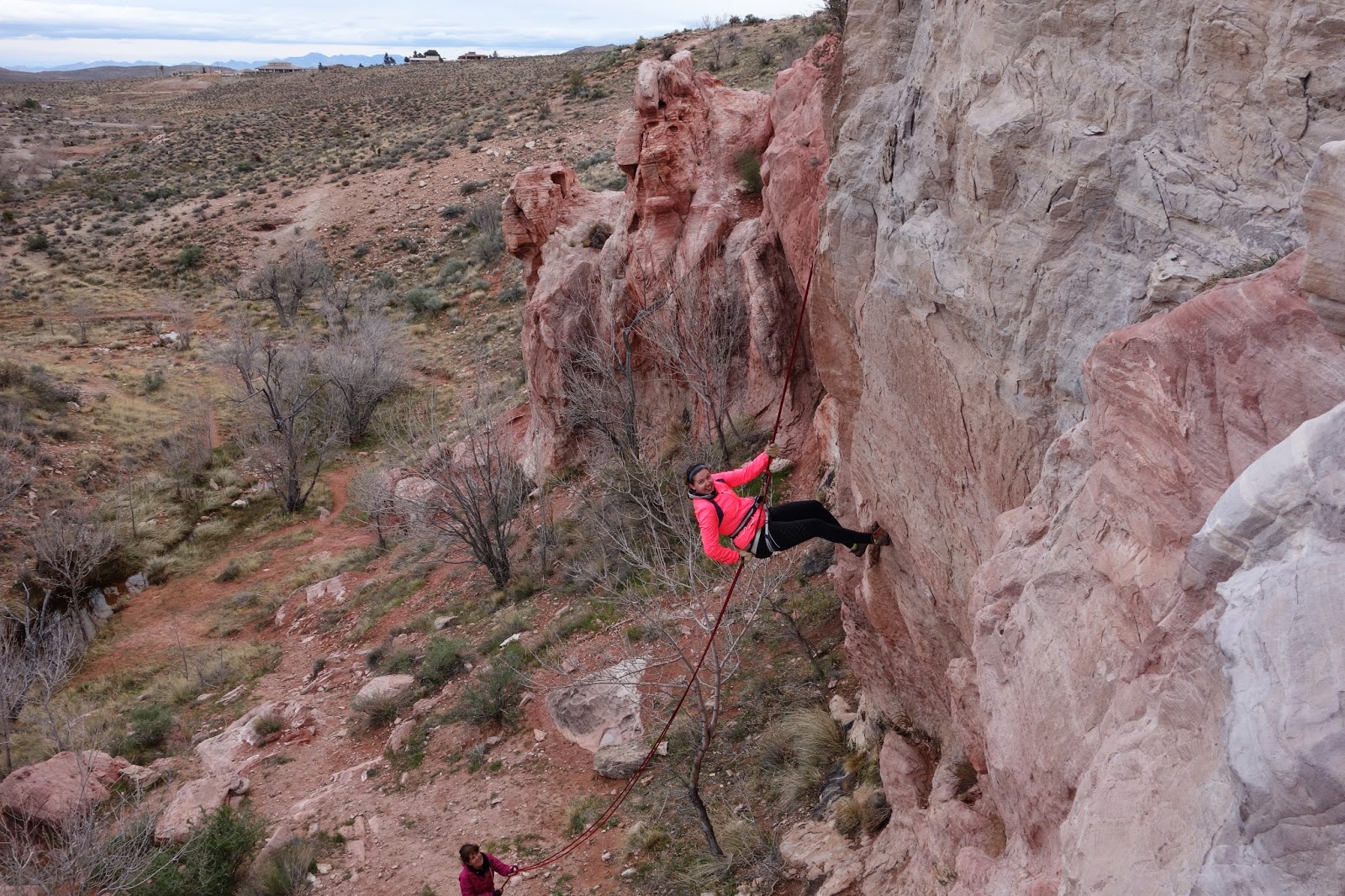 The most uncomfortable part of rappelling is the first few steps when you're convincing your body that it is totally normal to be parallel to the ground walking down a wall of rock.
Rappelling makes me think of Ender's Game when Ender orients himself in zero gravity by saying "the gate is down."  I just kept telling myself that "the wall is down," and it was surprisingly effective. 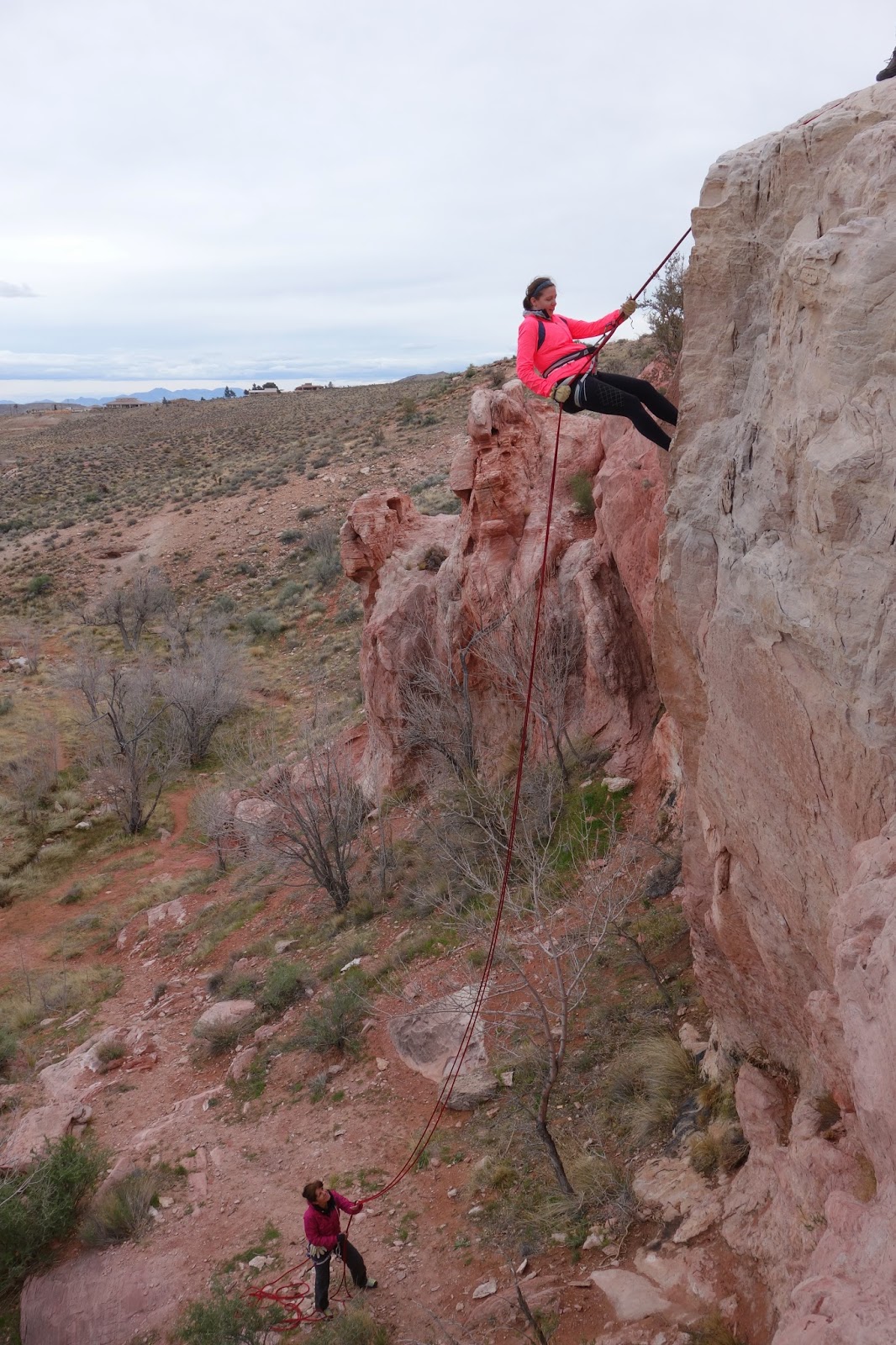 Before long, I felt surprisingly comfortable with rappelling on that particular rock (it was only about 25 feet...I'm still working my way up to longer rappels) and I was ready to ham it up for the camera =) 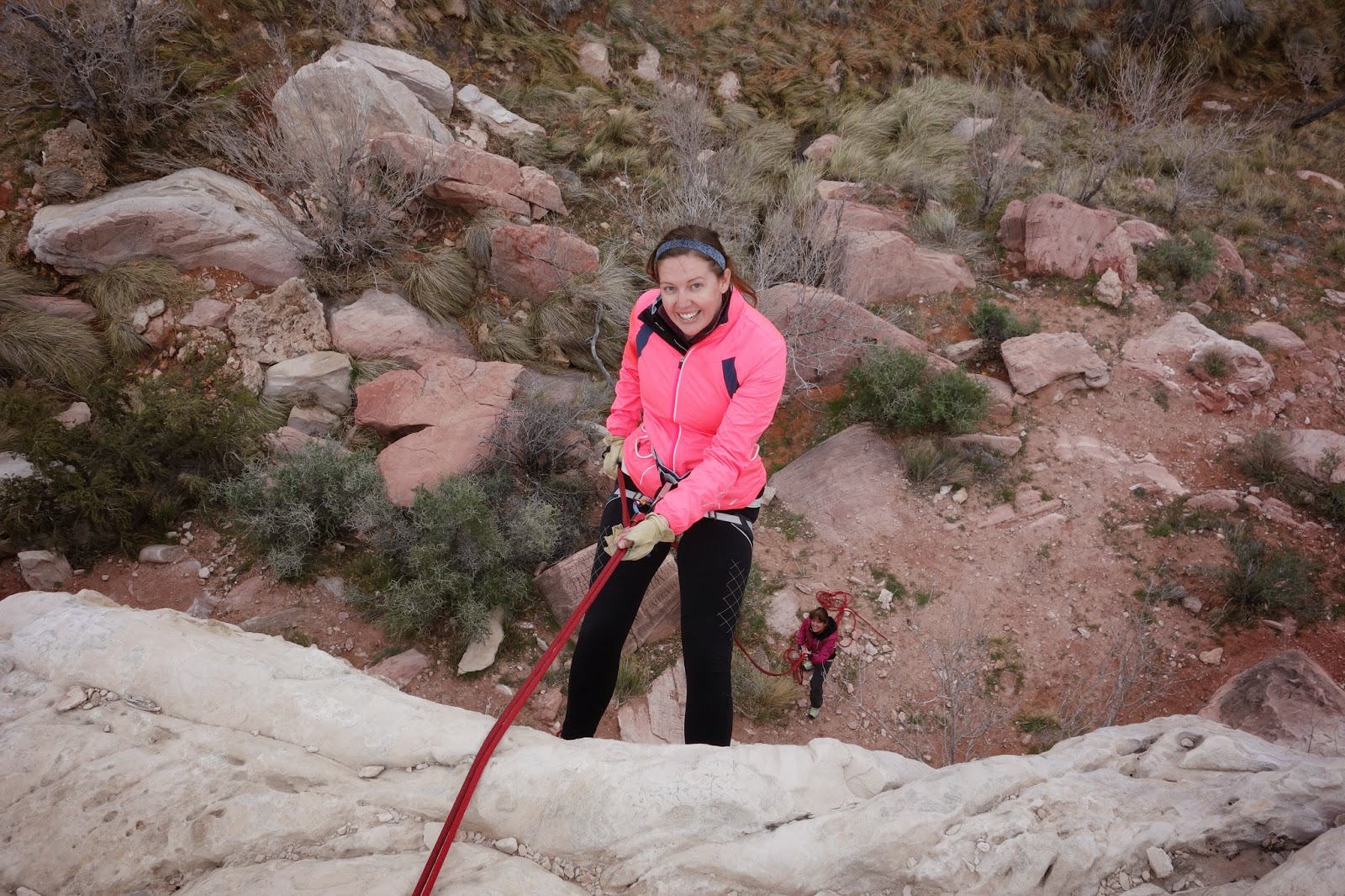 Wow.  Before I started re-writing and editing this post tonight, nearly 6 months later, I hadn't remembered what a great day March 2, 2014 was!!  Just another day of getting a great workout with amazing friends and learning a lot of new tricks along the way!  Reliving these days now that I'm very close to moving away from Vegas is making me feel very blessed to have had the experiences that I've had in this amazing community and extremely sad that I won't have additional experiences like this every weekend next winter too.
Posted by Unknown at 10:24 PM