The rest of my family weekend

On Saturday, after eating an awesome $6.99 buffet breakfast at Red Rock Casino, we headed back out to Red Rock National Conservation Area for a lovely 3.5 mile round trip hike through Ice Box Canyon.
When my parents were out here last year for Thanksgiving, we attempted Ice Box, but it was my first time and my mom was only about 6 weeks removed from rotator cuff surgery, so we didn't get it all the way done.  I've since done this hike countless times (I'm sure you're sick of hearing about it), but my parents had still not done the entire thing, so we decided to give it another go this year....and I am *so* glad we did!!  Because of the recent snowfall that the higher altitudes received, there was a lot of water running and several small waterfalls/flowing streams along the way with the waterfall at the end about as heavy flowing as I've seen it.  In fact, we saw more water this year than we saw last spring when the snow melt should have been about at its peak!  Last year at this time we hadn't received any snow yet, so the whole place was bone dry.
The Ice Box Canyon hike kind of has it all.  First, there is about a mile approach hike that is just along a rocky path and it is slightly uphill so it gets your heart rate a little elevated.  After that, you do a little over .5 miles scrambling up rocks and over/around boulders.  There is even a giant log that you can walk across or poorly attempt yoga poses on. 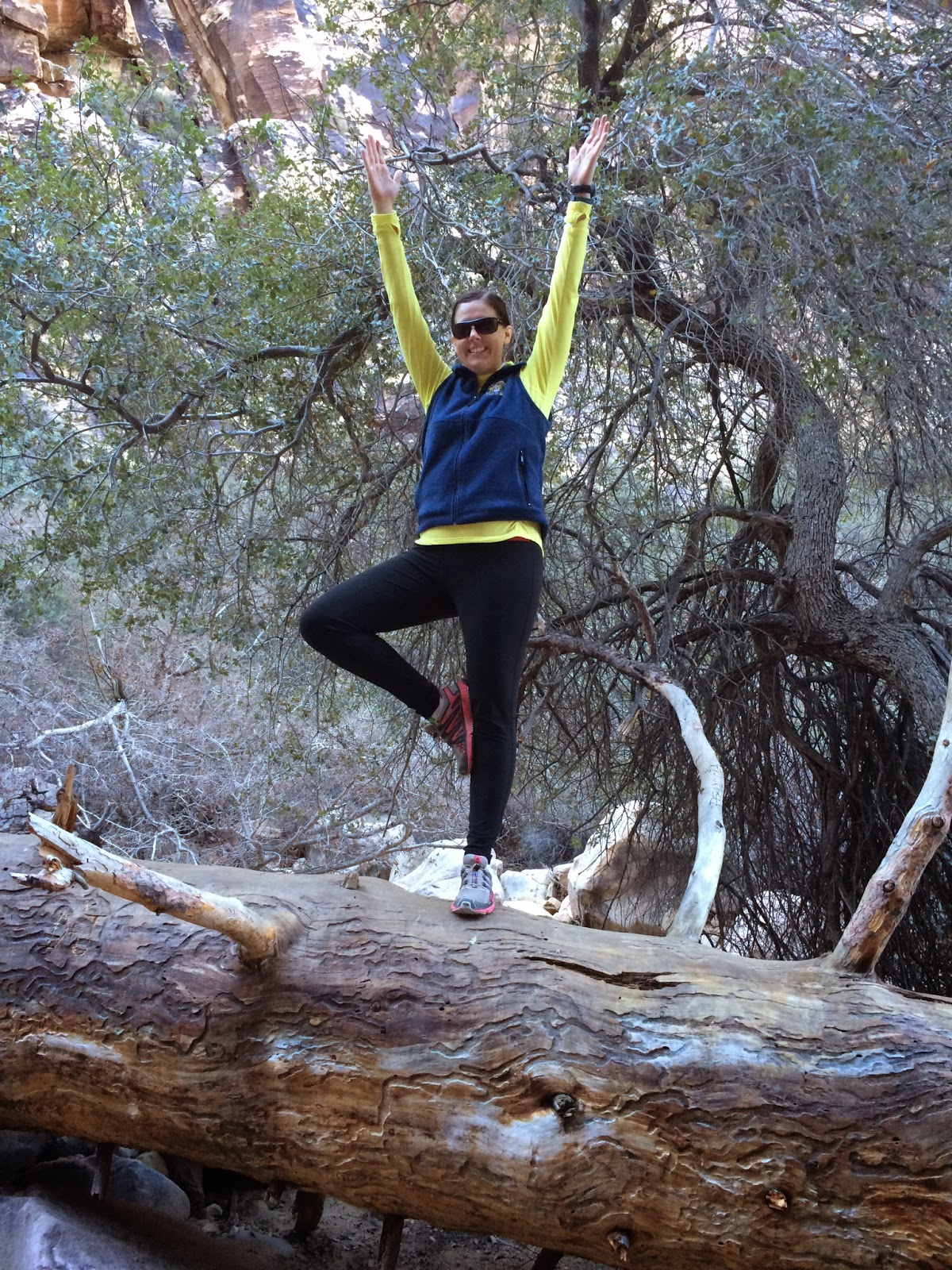 My parents even crossed the log.  They totally didn't have to; there are perfectly easy ways to do this trail without crossing the log.  You can basically walk on the ground right next to the log, the log itself is only 3 feet off the ground. 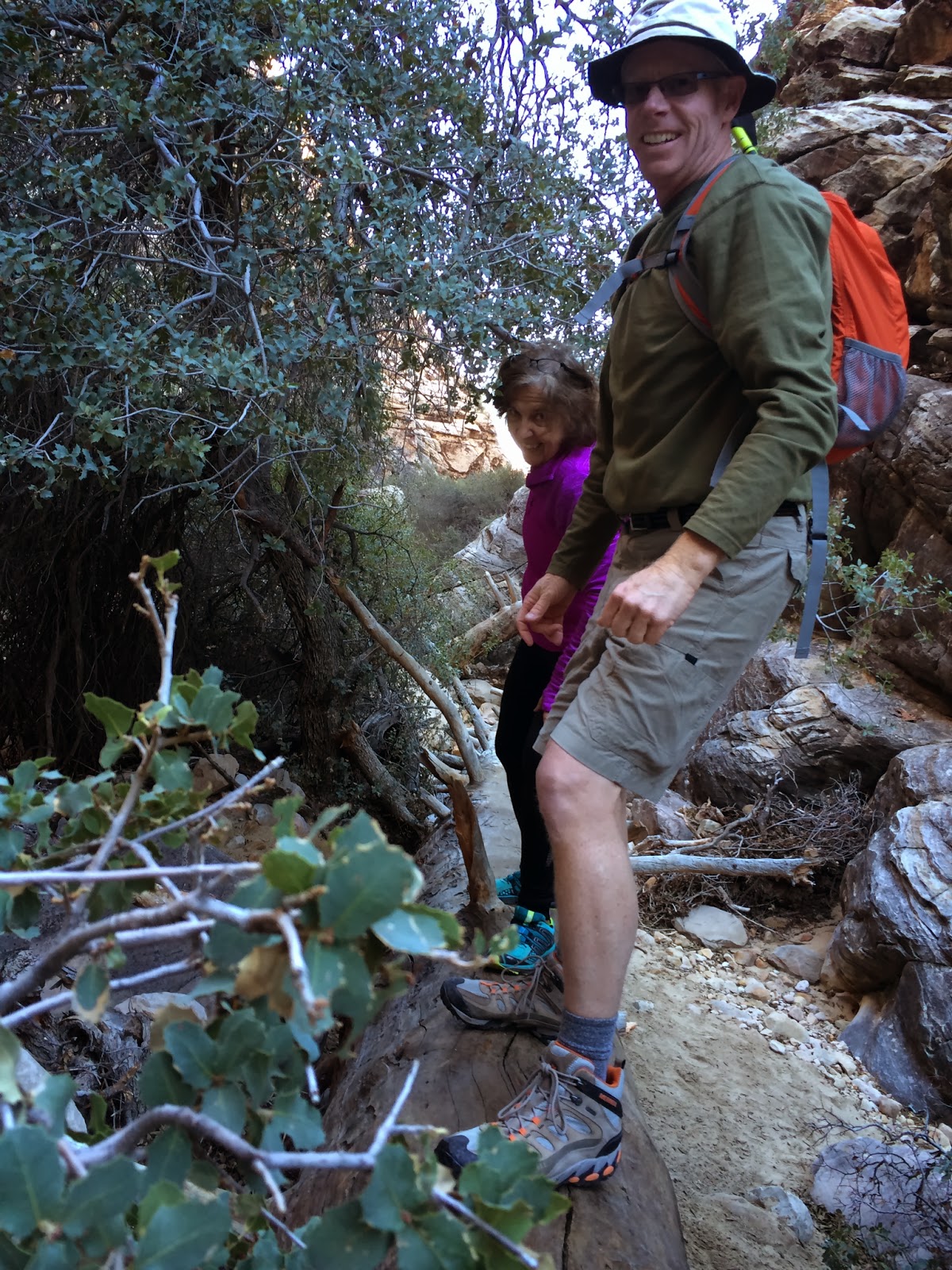 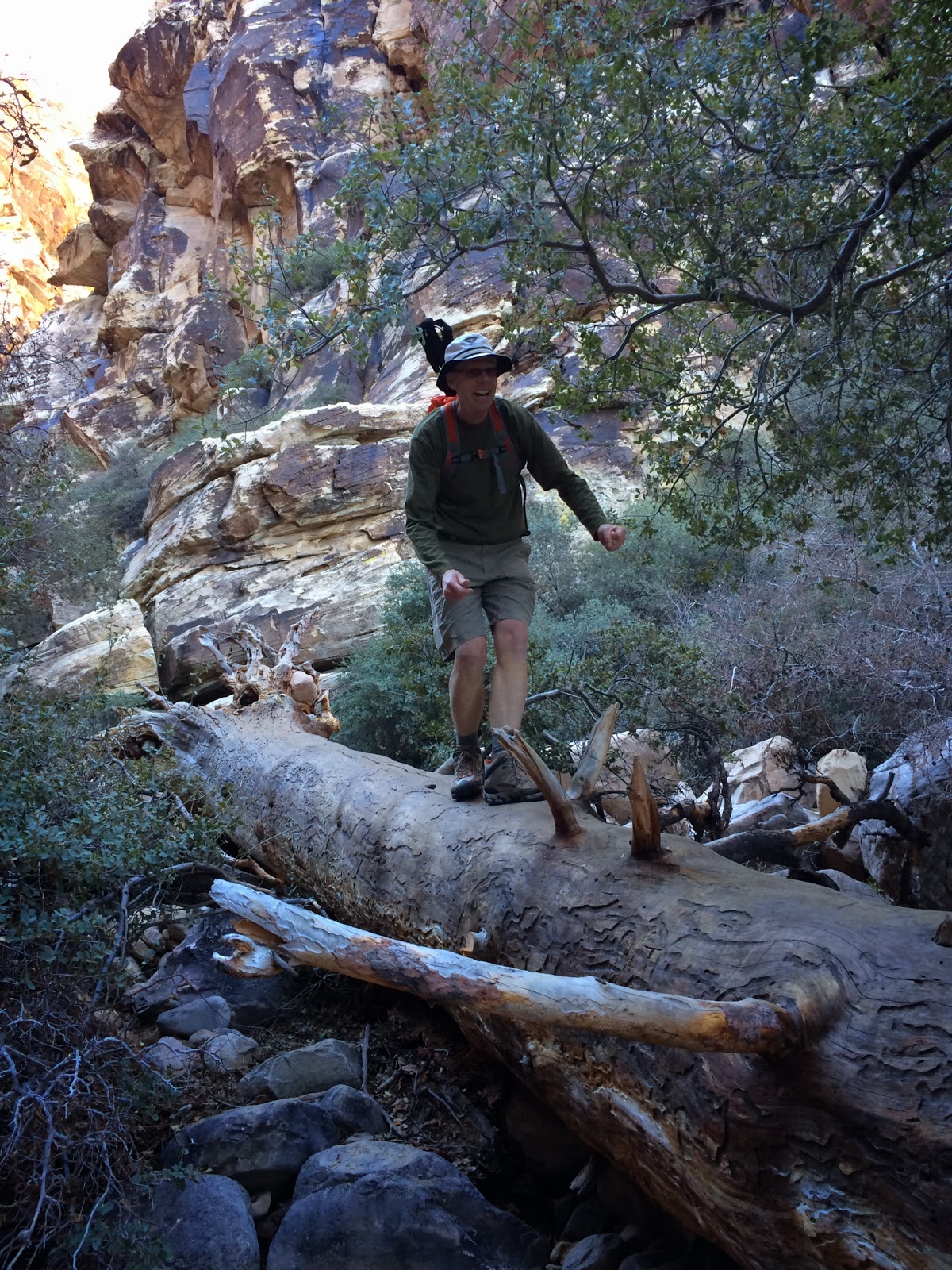 The turn around point of the hike is pretty obvious because the canyon basically closes up.  When the snow is melting, there is a lovely little waterfall.  By waterfall standards it is a bit underwhelming, but when you remember that you're hiking in the middle of a desert, the waterfall is a bit more impressive.

After climbing and playing around the waterfall a bit, we started the trek back to the car.  As we were hiking out, we noticed a helicopter flying towards us into the canyon and were told by some nearby hikers that a woman ahead either sprained or broke her ankle and was unable to walk.  Getting injured on a hike is something about which I'm pretty much constantly afraid.  Fortunately, Red Rock Search & Rescue arrived in the helicopter to come to the injured hiker's aid. 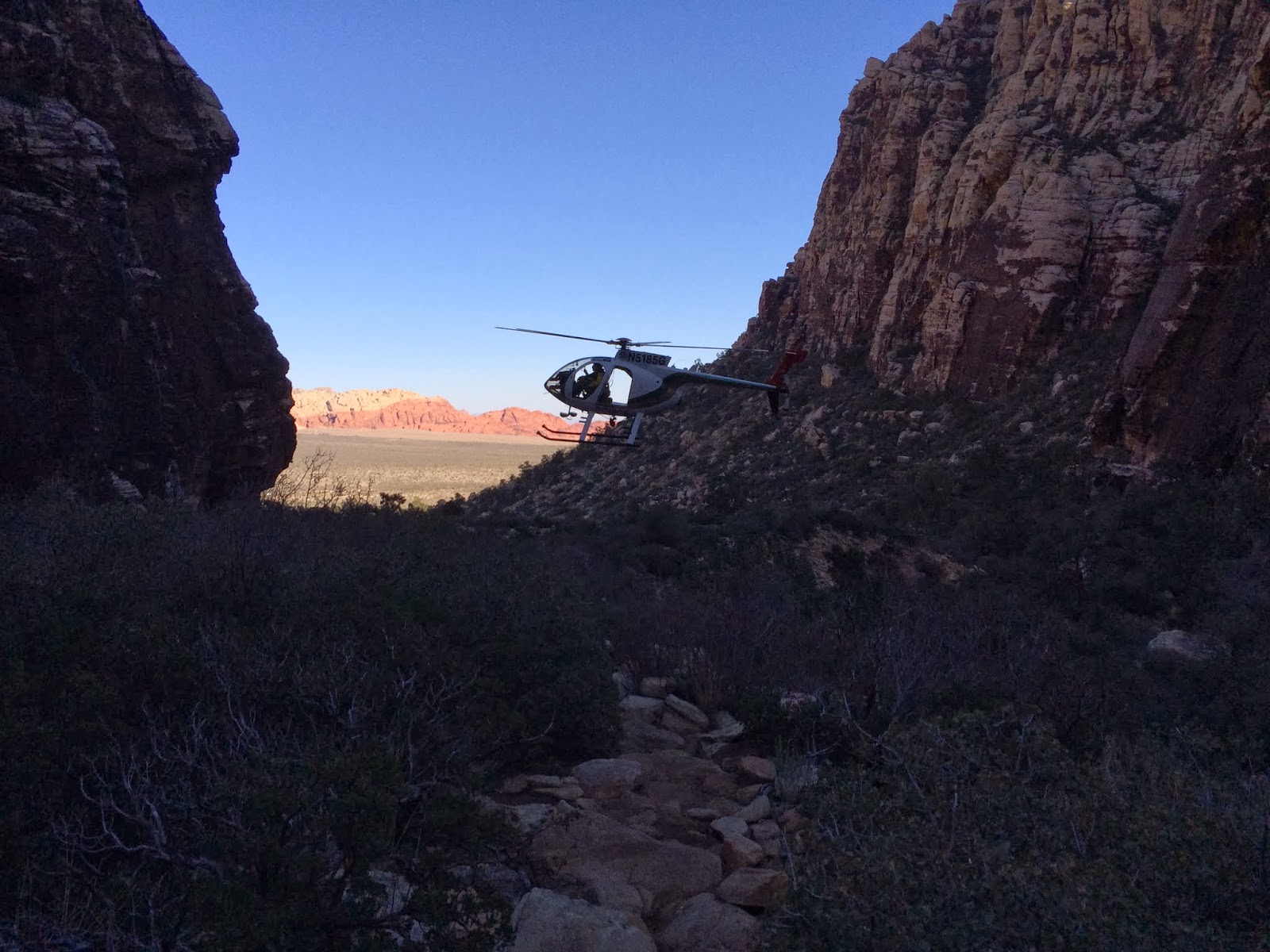 I love the sound of waterfalls and I also got a couple of clips of the helicopter before I started feeling terrible about sort of taking advantage of the poor woman's misfortune.  My lack of scruples is your gain: take a look at my poorly crafted iMove creation!

After we got home, we cleaned up and headed out to the UNLV basketball game.  My dad scored us tickets because one of the current UNLV basketball players played last year at the junior college where my dad works.  It was more fun than I expected considering I didn't really have any skin in the game.  UNLV won....and I guess when it comes to deciding between UNLV and University of Tennessee at Martin, I guess UNLV can be my preference.....plus, because UNLV scored more than 70 points, everyone got a coupon for TWO FREE TACOS at Jack in the Box!!  I haven't eaten my free food yet, but, rest assured, I will enjoy them in the near future.  I never claimed to be a role model for healthy eating. 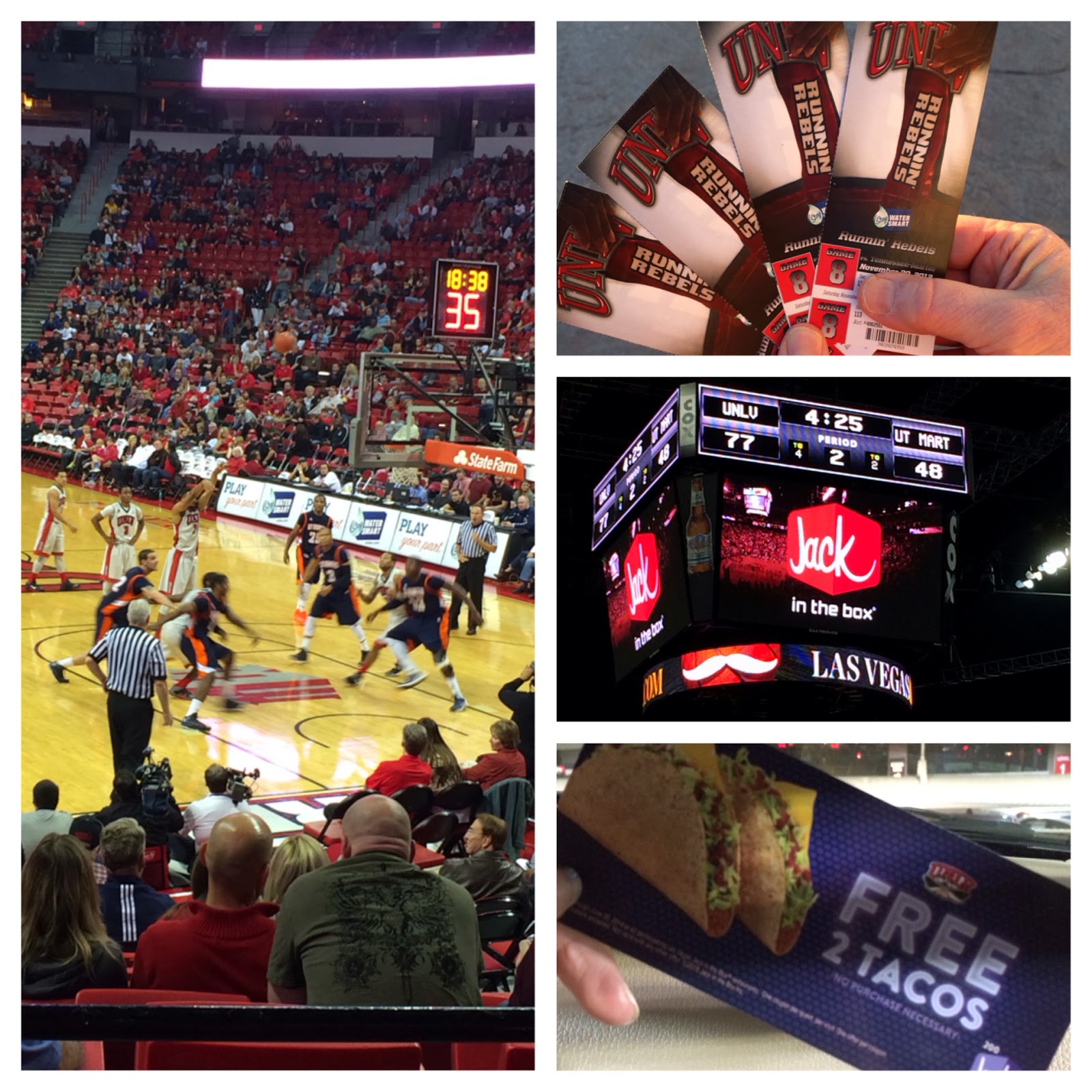 Sunday was largely a blur with not much to report.  I did get in a 10 mile bike ride, which isn't much, but its the most I've been on my bike since the end of October and it felt great!!