I had a very full weekend this past weekend.  After Ragnar, I was pretty low-key on Sunday to recover.  However, I had Monday off of work for Veterans' Day and I decided to take advantage of that by hanging out with my good friends at Hiking Las Vegas.  It is time for me to get back to being serious about this 52 Peak Club.  I'm sitting at 16 cards, so I have a long ways to go before I leave Vegas in August!!  Bonus: I really like a lot of these people, so it was nice to see some friends that I hadn't seen since early summer.
So, Monday morning, after dropping a friend off at the airport, I zoomed over to the Pine Creek Trailhead at Red Rock Canyon National Conservation Area.  I was a little late, due to my trip to the airport, but the group was kind enough to wait for me.  I grabbed my pack out of my car and we headed down the trail towards Magic Mountain!

Here I want to say a big congrats on becoming an Organizer to my friend Chris!!  This is somewhat belated, I think he's been leading hikes for the group for more than a month now, but this was the first hike I've been since he graduated from the ranks of the lowly hiking participants to an esteemed Organizer.

The first part of the hike was an easy hike along a trail, eventually this trail started becoming more and more steep until we encountered the sandstone at the base of the mountain.  That's when the fun began!!


Here's where I should probably admit how much I was still hurting and experiencing general exhaustion and dehydration from Ragnar.  Fortunately, I had over 2L of water and a big bottle of strawberry lemonade Nuun to get me through.

Once we reached the base of the mountain, we did about 45 minutes of class 3 scrambling and even a little class 4!!  Most of the scrambling was low-exposure.  However, now that I've been checking out the pictures from the hike, I'm realizing there was a bit more exposure in parts than I realized at the time...that's probably a good thing. 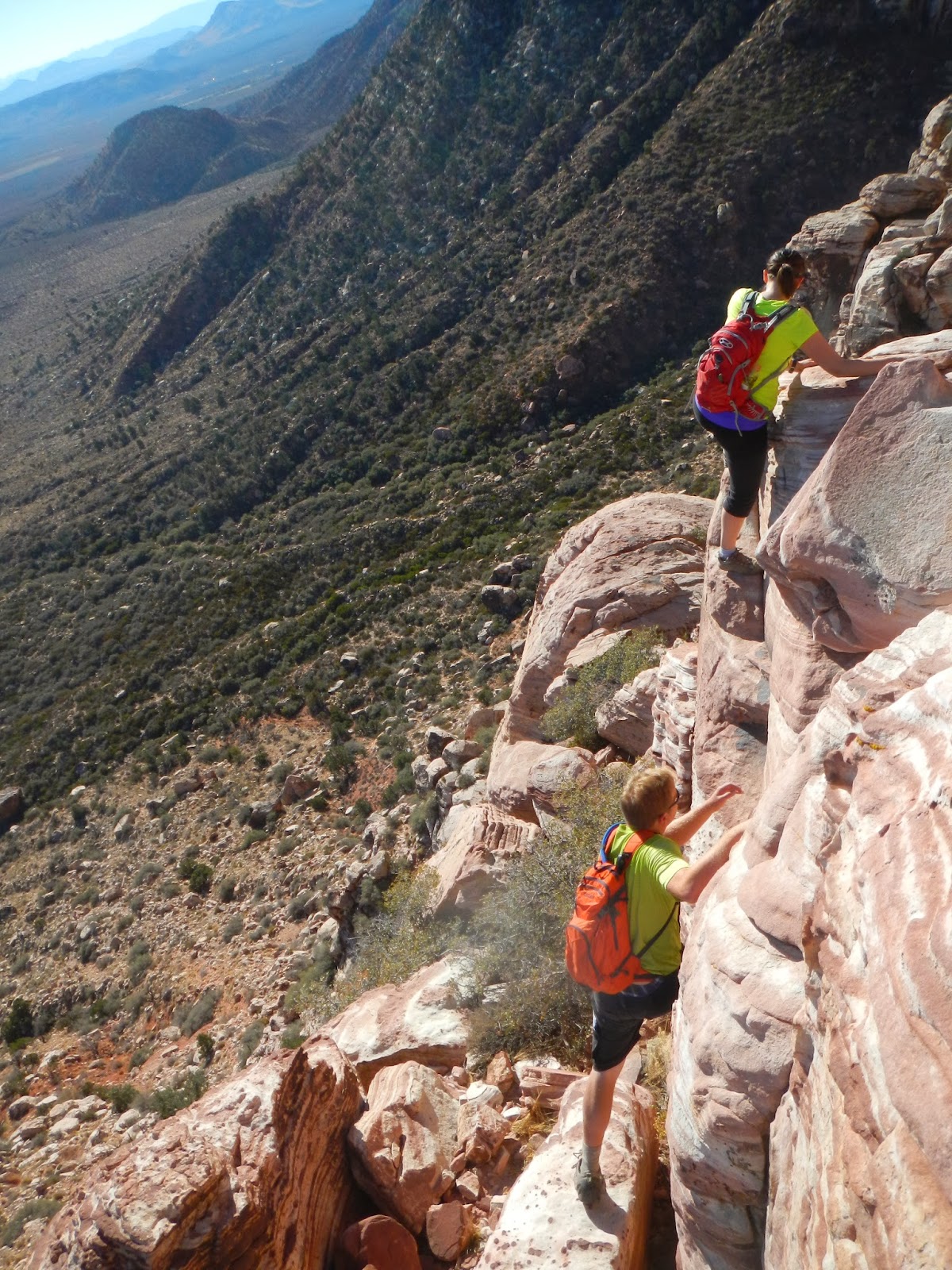 After a bit more scrambling, we got to the REALLY fun part - a 20-foot, class 4 chimney that required the use of a rope.  I'll admit, I was pretty nervous at this point because it had been awhile since I had done any serious hiking, especially anything class 4.  Seriously, the last time I did anything class 4 was probably White Pinnacle Peak in May. 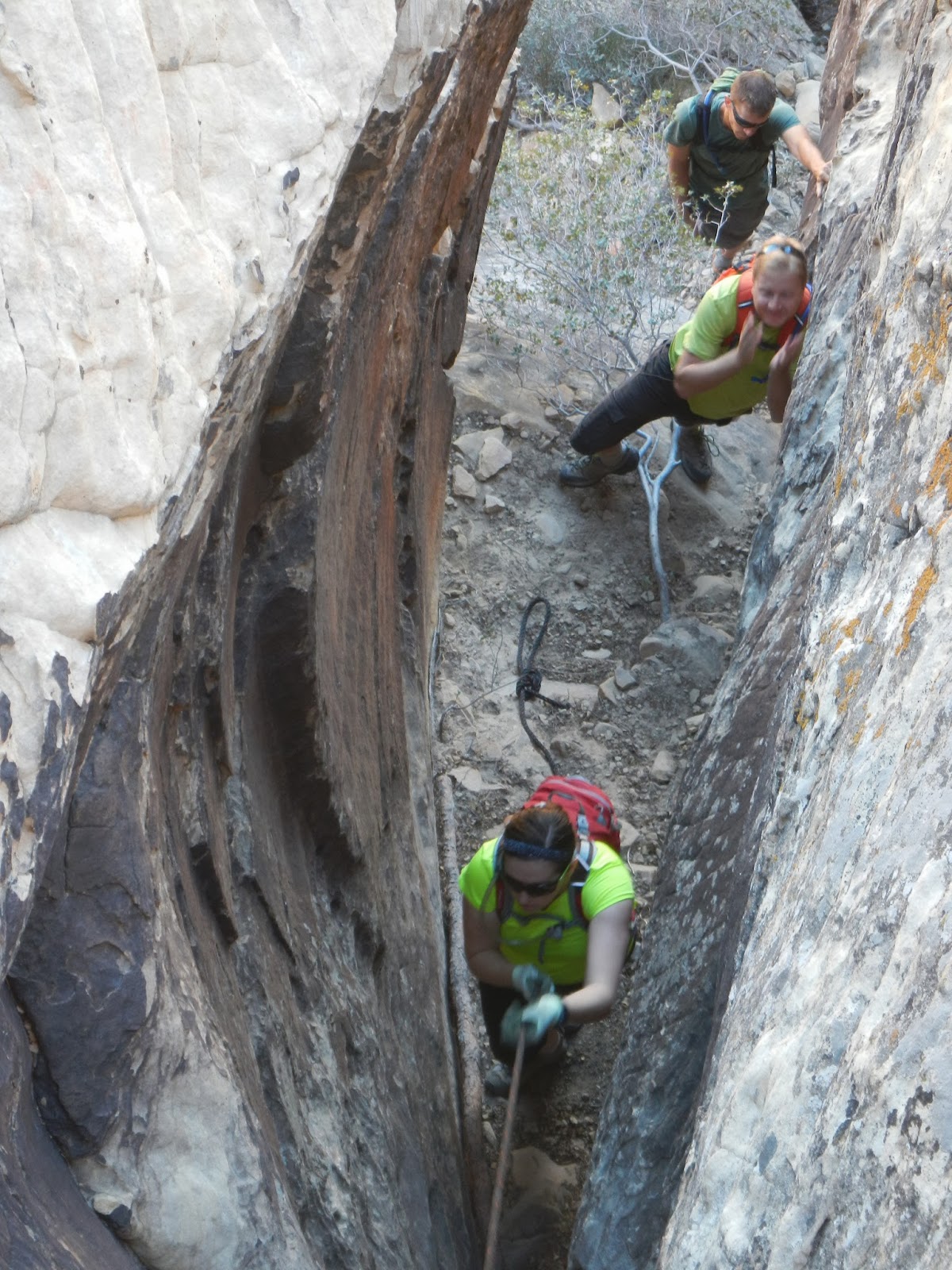 Basically, I just had to grab the rope and start climbing.  There were quite a few foot holds on the sides, but my strategy really was to just climb up and wedge myself into the chimney until I found the next set of footholds.

After quite a few moments of self doubt and thoughts of just staying wedged in the chimney forever, I finally neared the top and climbed out.

From there, it was a five second scramble to the summit, the sign-in book, and the 5 of Clubs. 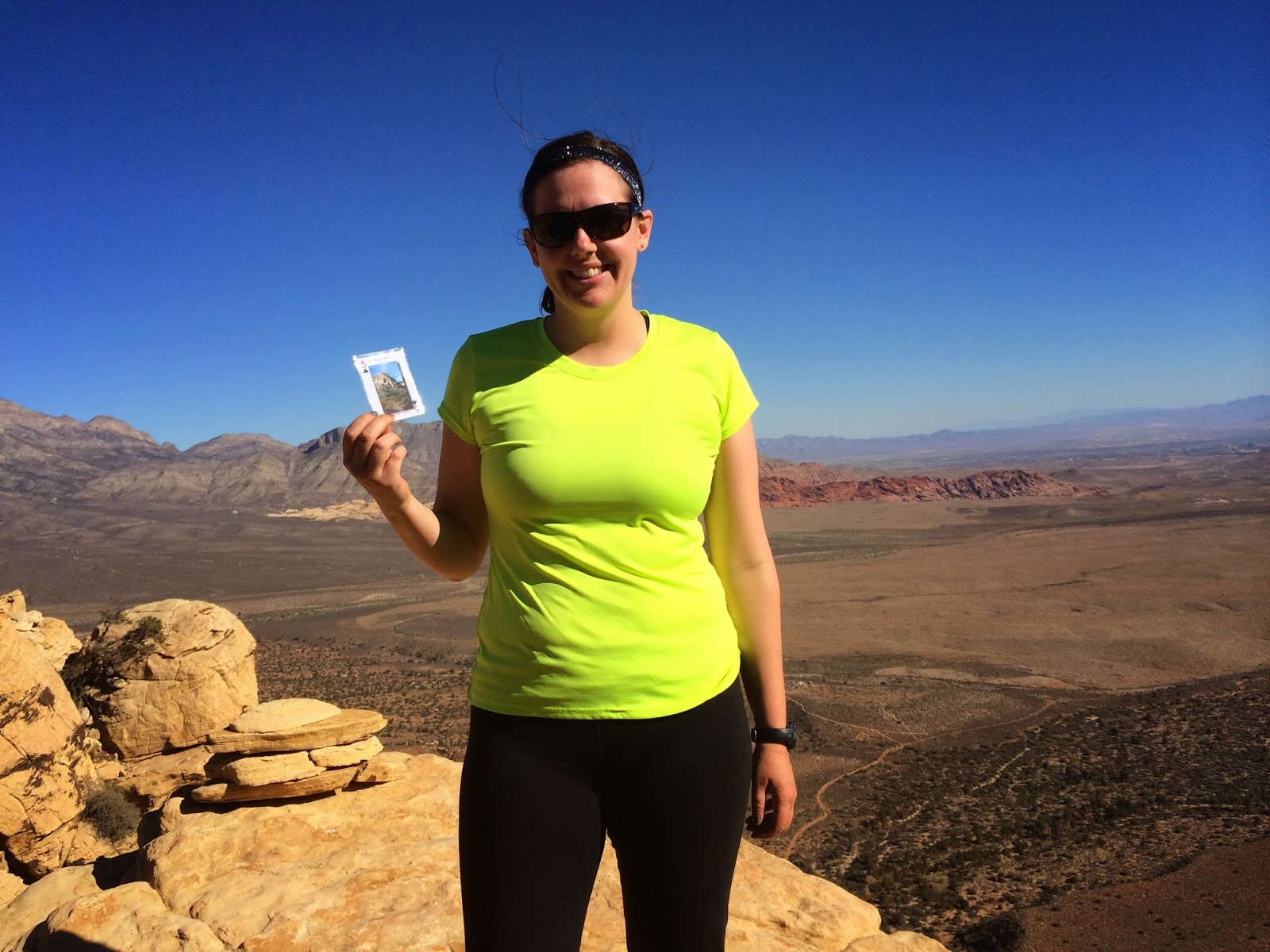 We had such a great group on the hike to Magic Mountain.  There was great conversation everywhere with everyone and my fellow hikers were super patient with my cautious movements as my body reacquainted to hiking and scrambling (of course, I was even more awkward given how exhausted I still was from Ragnar).
It's a little belated, but I just want to say a gargantuan thank you to all the veterans, especially my wonderful husband.  Whether I've met them or not, each and every veteran has allowed me to live the life that I lead with the freedoms that I enjoy.  I thank you with all my soul and from the bottom of my heart.


"This nation will remain the land of the free only so long as it is the home of the brave."
- Elmer Davis

****I know it isn't Veterans' Day anymore, but make sure to give any veterans in your life a big hug and thank them for their service!****