Where I'm at right now

I've been a little overwhelmed lately.  I'm not really sure exactly why, but I have several likely culprits.

First, my husband and I have been living apart because we work in different towns and it has really started to get to me.  As you know if you are a regular reader, we see each other lots of weekends and do lots of super fun things together, but I'm being a baby lately, and I just want more.  Plus, running outside in the dark (it seems like it is always dark here except for the hours that I'm at work!) (Update:  he gets to start spending more time working from home so we'll see each other way more!!)

Second, I've had a pretty difficult relationship with running over the past 4-6 months.  This was my first full summer living in Vegas (I spent most of last summer studying for the Illinois bar in Chicago) and it was hot, hot, hot, which made it extremely difficult to get my running in outside.  Most days, I ended up on the treadmill.  Then there are injuries that I've been trying to battle: hip issues, IT band issues, and now I may be on the verge of a nasty bout of plantar fasciitis.

Finally, I think I've just been doing a lot of comparing myself to others.  I just need to admit that I'm a lawyer and I will never have as much time  to run, train, and blog as much as I'd like.  There just aren't enough hours in the day.  That's okay.  I seriously love my job, so sacrificing some time on the roads, or on my bike, or in the pool is something I can live with.....not that I have a lot of a choice in the matter, I gotsta make that chedda.

Anyway, all these things and more have led me to decide to cut back my running a bit and focus on other types of fitness that I enjoy.  I still plan on running a couple times a week, but I want to spend more time hiking, cycling/spinning, and swimming.  So, I've decided that I probably won't do the Memphis Marathon in a couple weeks.  I feel pretty terrible about this decision.  I've never had a DNS race that I can remember.  However, a DNS seems to be a lot better than a DNF.

Okay.  That's enough doom and gloom.  On to happier topics, like my ingenious dinner.  Admittedly, it isn't the healthiest dinner and not something that would fall into the category of "well-balanced," but it was awesome and delicious and I don't have any regrets.
Please try this soon.  You won't be sorry.

Also, I know the beginning of this post sounds like a whiny brat, but I did have an awesome weekend with my husband this past weekend here in Vegas.  Living so far apart always makes me super thankful for each fun activity we do.

On Saturday morning we went on a quick-ish hike in Red Rock Canyon National Conservation Area.  We did the La Madre Springs hike that starts from the Willow Springs Trailhead/picnic area.  The hike was 3 miles round-trip.  The first half is pretty much all uphill, but it is very manageable, and very beautiful.
It would be a great trail for trail running.  However, we weren't really in the mood for trail running on Saturday.  We just wanted a nice peaceful walk during which we could talk, enjoy the scenery, and burn a few calories from the giant panera breakfast I had previously eaten.
Once we got to the springs, we were surprised by just how much water there actually was.  I felt a little misled about this area's characterization as a desert... 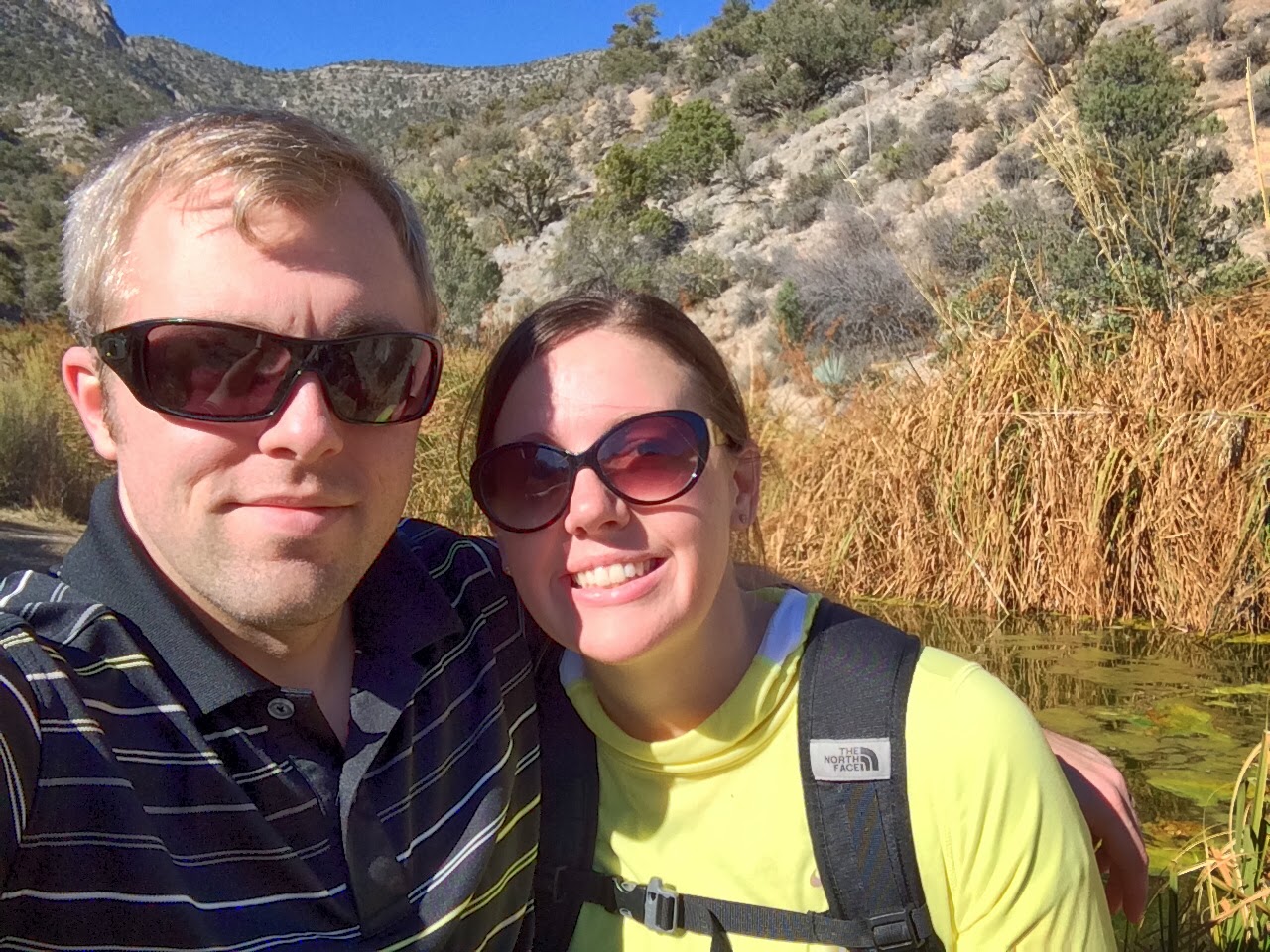 La Madre Springs is a really excellent hike for all levels.  It isn't super long and there is ZERO scrambling.  The only catch is that the whole way to the springs, 1.55 miles, is all uphill, so be prepared for that depending upon your level of fitness.  Honestly, this trail would be fantastic for trail running, but we weren't really in the trail running mood on Saturday.

After the hike, we literally went home and took 3 hour naps.  We did this on purpose because we knew it was going to be a late night; we had BIG plans.  We ate at one of my absolutely favorite restaurants in Las Vegas, Lotus of Siam...the food is just...woah.  I don't even really love Thai food, but I think they put crack in their food at Lotus because I am hooked. 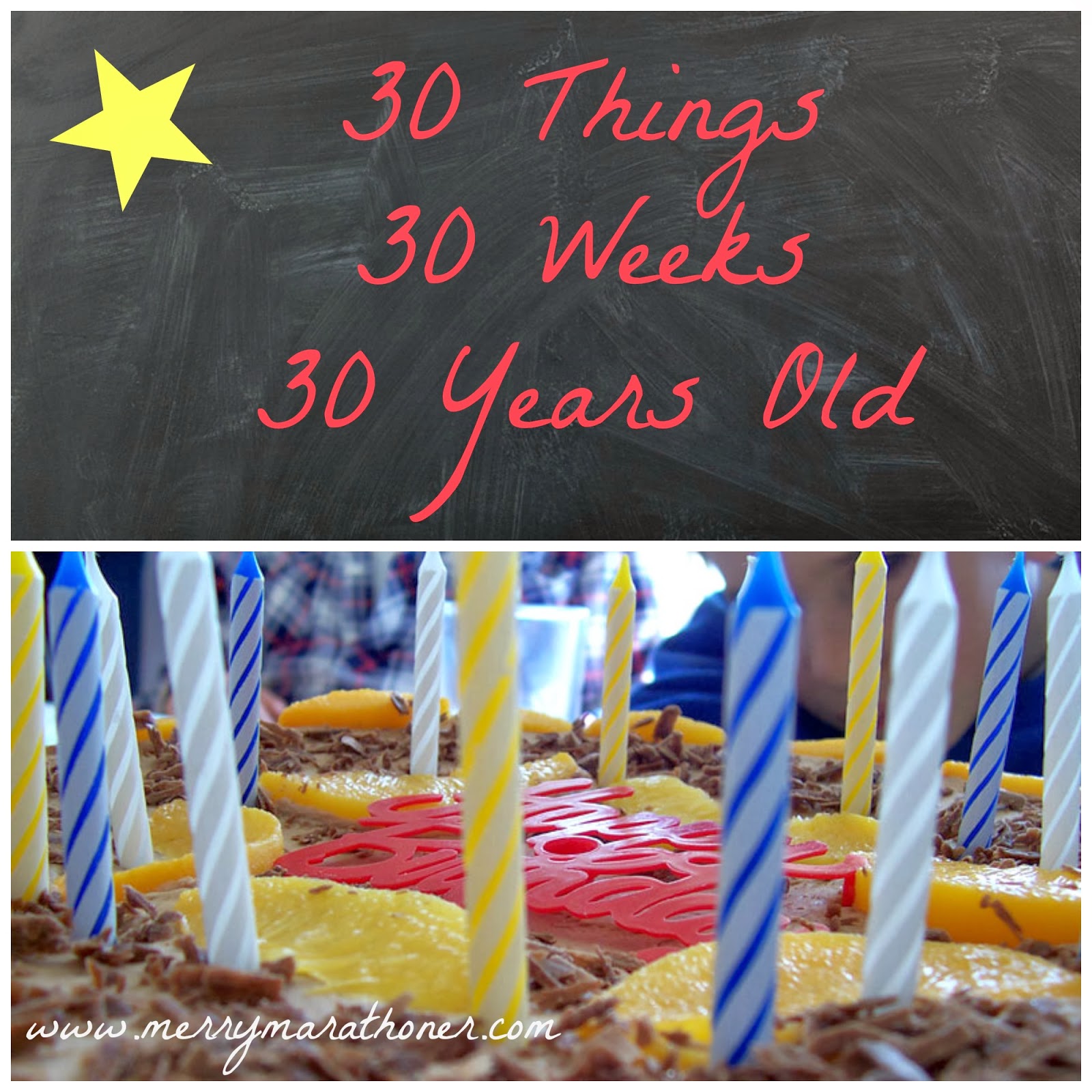 I know, I know...I'm hopelessly behind on this project, but I still have hope that I'll pick up the pace and make it to 30 before I turn 30. 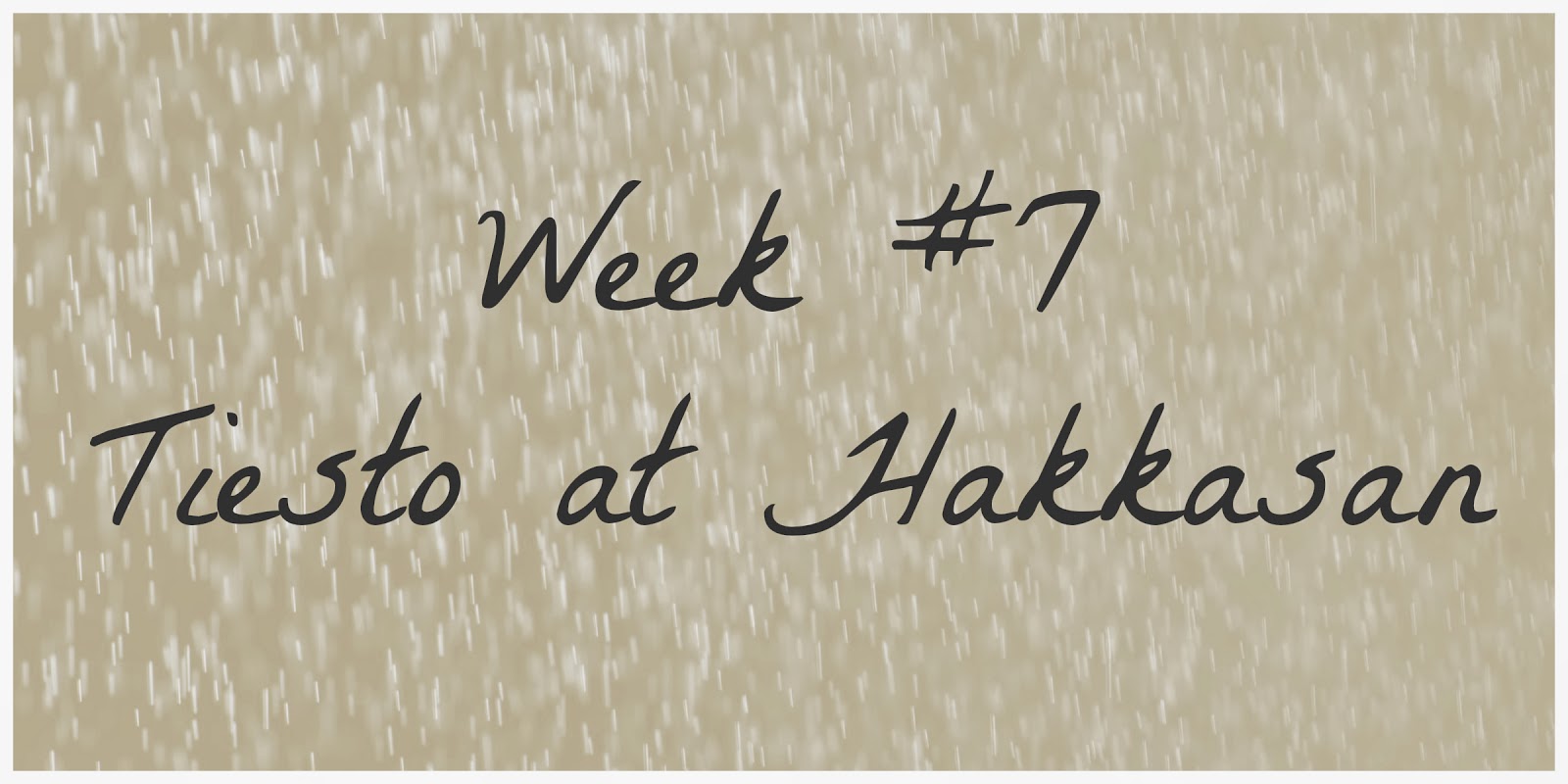 After Lotus, Adam and I headed to Hakkasan, the club at the MGM Grand, to pretend we're younger than we are to see Tiesto. 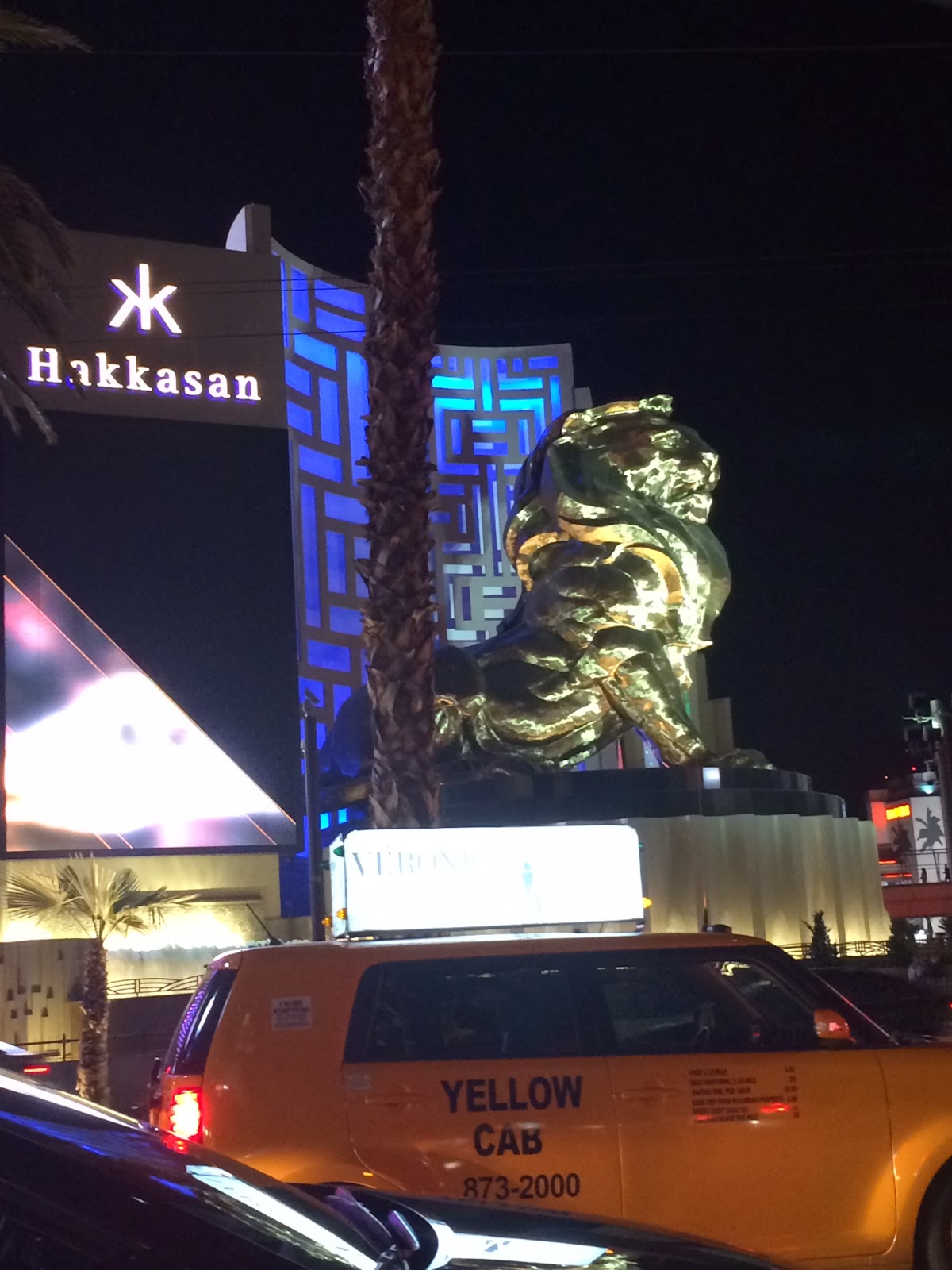 In the interest of full disclosure, I've been to one other Vegas club, but it was just 1 OAK at the Mirage and it was small and not impressive in any way.  The real "new" part of my experience from Saturday night was seeing a legit DJ do his thing. 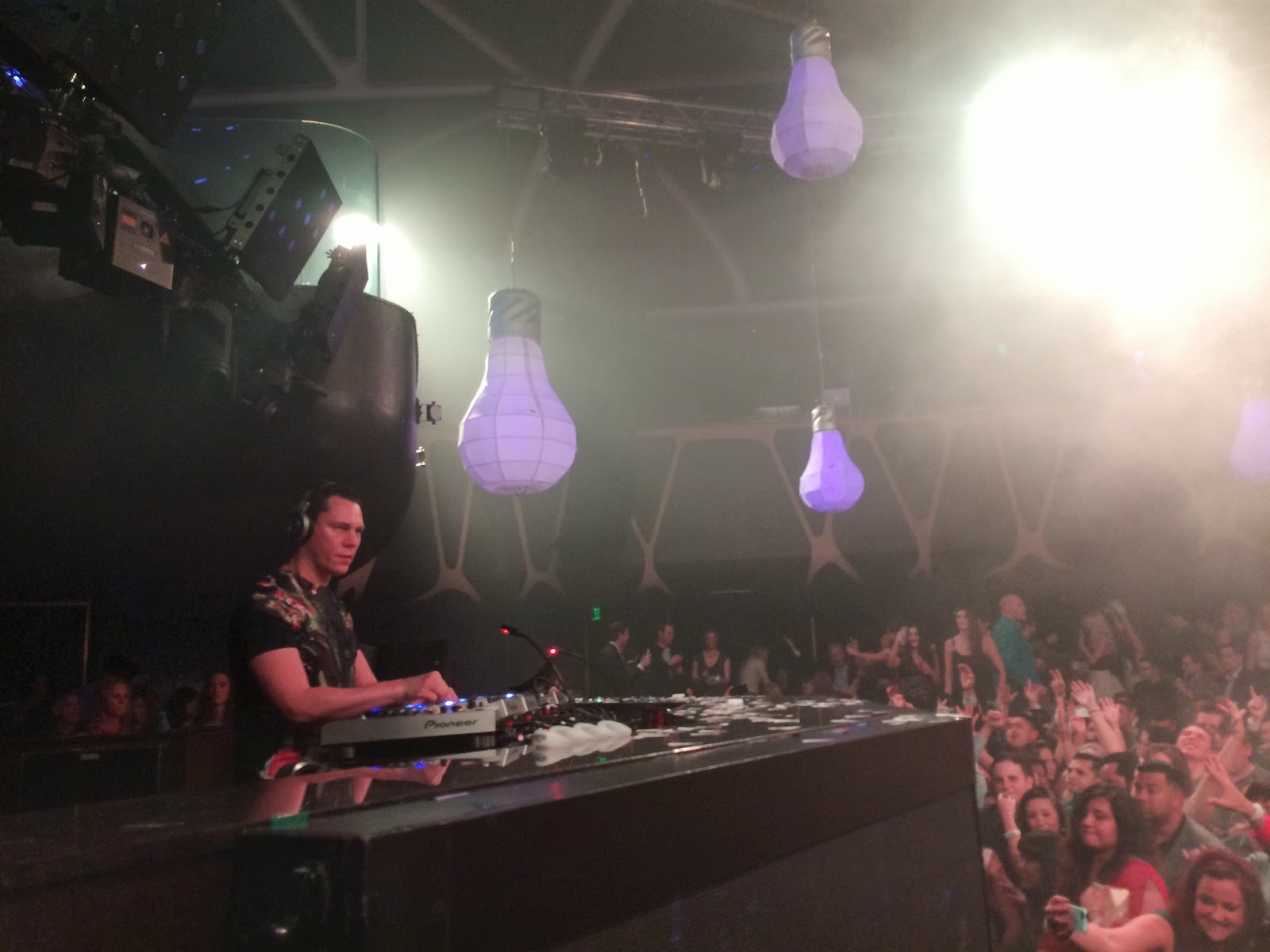 We arrived at 10:30pm and ended up seeing 3 DJs before Tiesto did his set.  All were fantastic but having two DJs in front of Tiesto meant that he didn't come on until 1 AM!!  This is why we needed the naps.  I am 29 years old and my husband is 32.  We aren't exactly young pups anymore.  We're so much not young pups that this is how we pre-game for something that requires us to stay up past 2 am: 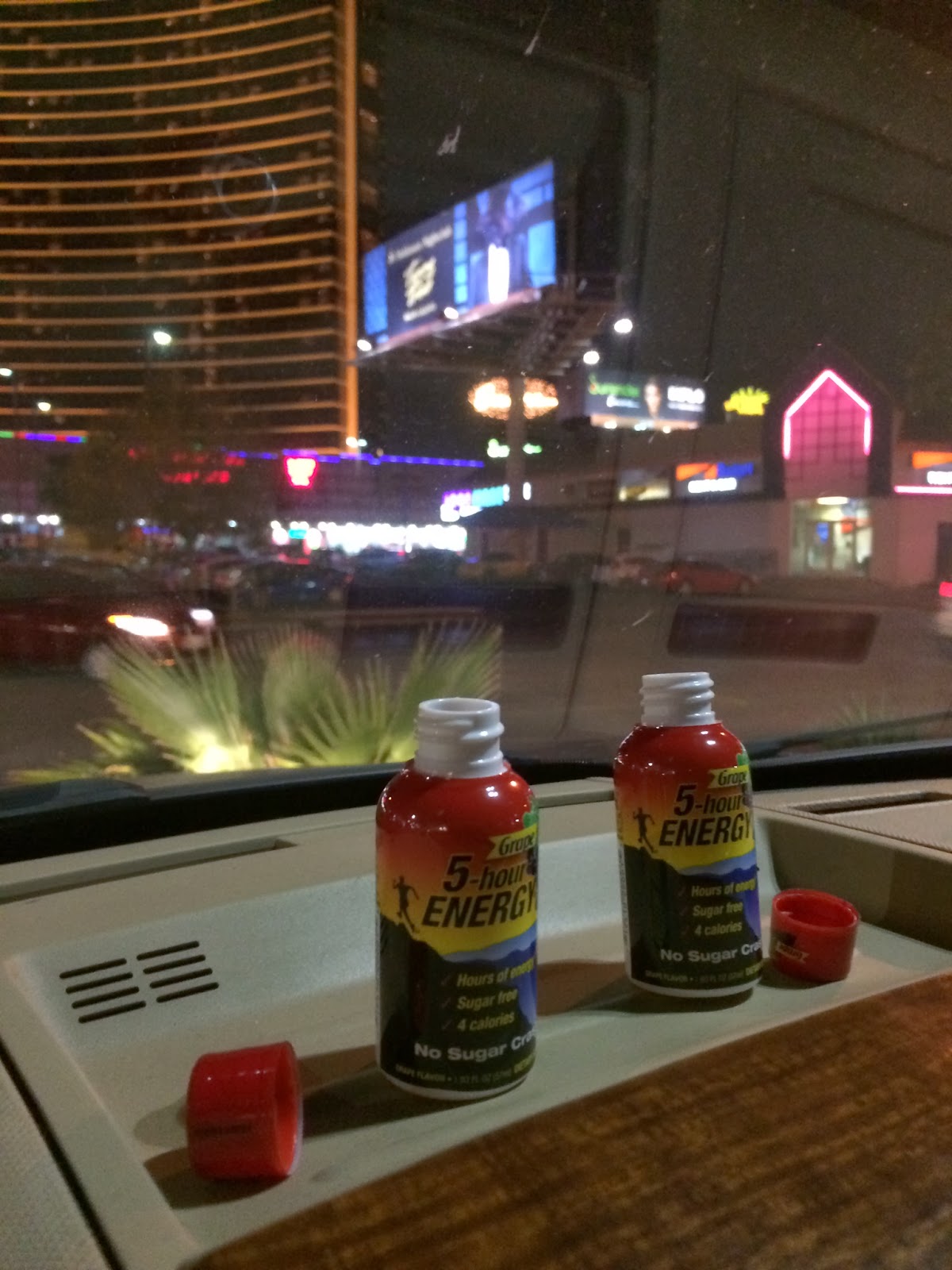 Even with the copious amounts of diet coke that I drank at dinner and the 5 hour energy shot, I was struggling to stay awake by about 1:50am, which is really sad because the music was really fantastic....you know, if you're in to electronic dance music. =)

Around 2am I start to get a little loopy and thought that this picture was vital to my survival as a human.  Apparently there was a UFC fight at the MGM earlier that night.  I'm clearly very tough and have a bright future in UFC.....okay, I don't even know what "UFC" stands for....  Whatever, I'm tough and people were legitimately scared of me when I posed for this picture.....people laugh when they're scared, right?  that's a thing, right? 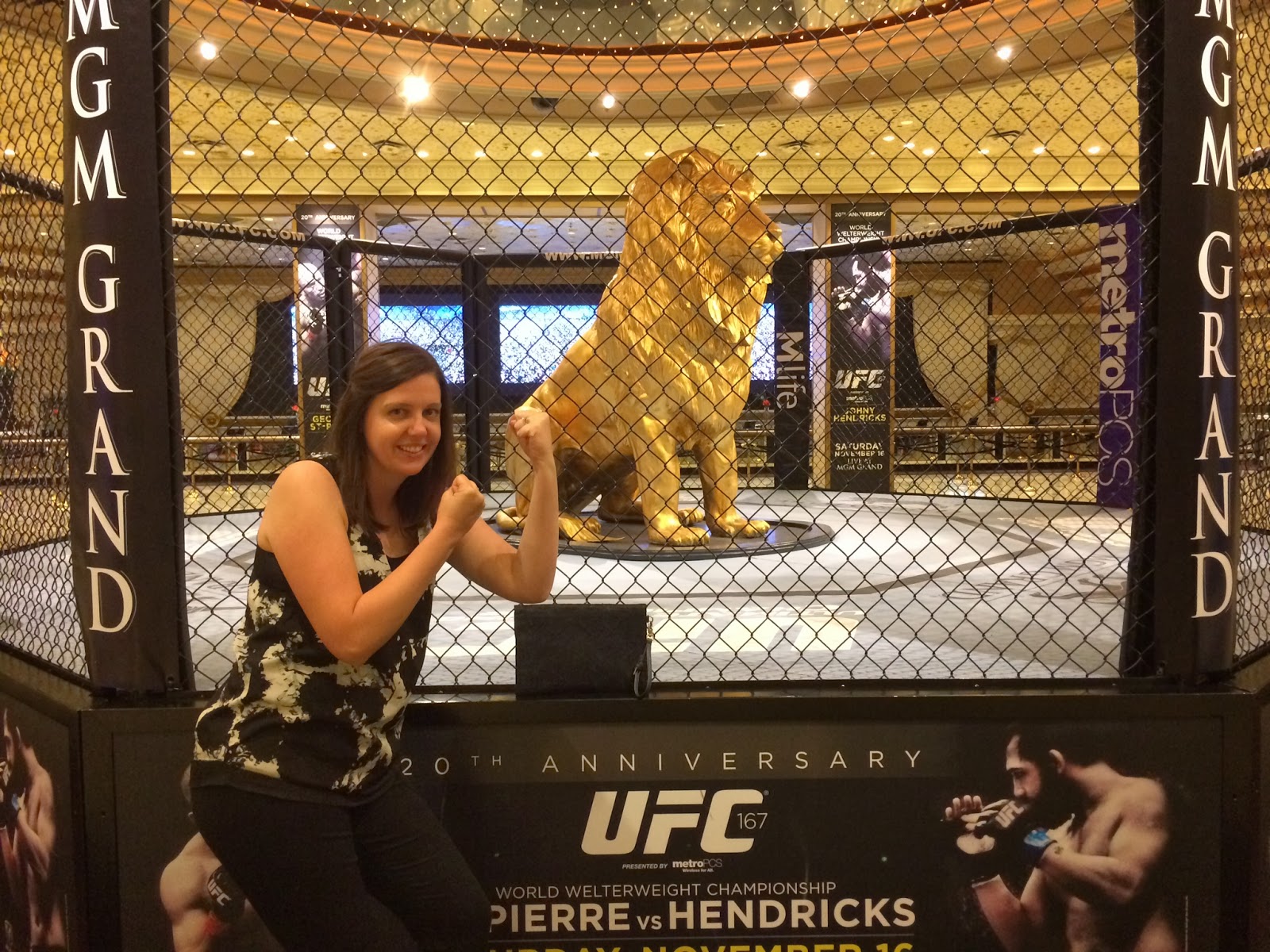 I know this post is a little bipolar, but am I a quitter for dropping out of the Memphis Marathon?  Bad decision?  I just don't know...
Posted by Unknown at 4:30 AM