This past Friday and Saturday, I embarked on my second Ragnar adventure:  Ragnar Las Vegas. (check out my previous Ragnar experience here!)


...get ready to be overwhelmed by pictures...

I anticipated that I would enjoy Ragnar Vegas more than Wasatch Back because I obviously know the area and know lots of people in the area...aka easier to fill my stomach with food and find good places to get a decent amount of sleep.  I was so right!!
I've been looking forward to this event for awhile now, so when Friday morning finally arrived, I was ready and so excited!!  It was definitely an early morning.  I woke up at 4am to pack the van (after staying up until 1:30am gathering the items I needed for the 30 hour event) - before I knew it, both vans were headed toward the start line, which was located near Mt. Charleston at the ski resort at Lee Canyon.

Our start time was 7:15am.  Fortunately, we arrived at the start line in time for a little photo shoot action.
Once Runner #1 and Van #1 took off (I was Runner #8 in Van #2), we displayed what gifted artists we are on Van #2 with the help of my trusty friend, window chalk.  (In reality, it was more like a display of why most of us are lawyers and not artists...)
After we finished our version of Pimp My Suburban, we headed back down the mountain to do breakfast in the most Vegas way possible....a buffet at a casino.  Perfection.

Even though it seemed like no time had passed, it was suddenly time to head towards Exchange 6 so Van #2 could take the baton (slap bracelet) from the final runner in Van #1.
My first leg was a little over 6 miles and was mostly downhill.  The only tricky part was the random gravel trails that you had to run across.  Given my excellent coordination and balance skills, I wasn't worried at all that I'd break an ankle (sarcasm).  I was also slightly annoyed about all the stoplights towards the end - they hurt my pace and rhythm a little, but not that much.

Van #2 seriously killed it on our first set of legs - we booked it.  Around 4:15pm, we handed the reigns back to Van #1.  We were pumped to have our first legs out of the way, pumped to get some food, and, at least I was, pumped to take a nap!

The next major exchange was at Spring Mountain Ranch.  The last runner in Van #1 had a serious 10 mile run that was pretty much 100% uphill for the first 7 miles.  I did not envy him one little bit.  I've ridden my bike up that 7 miles and it is tough!  Nevertheless, he came into the exchange hard and amped and Van #2 was off for the second set of legs!

My second leg was refreshingly easy - 3.1 miles all slightly downhill.  It was pitch dark, so we were required to wear reflective vests, headlamps, and a flashing red light on our backs.  The 3 miles felt awesome and before I knew it, I was done and handing off to Runner #9.

After my 2nd leg, things kind of fade into a blurry haze of sleep deprivation.  I think pretty much everyone in the van was feeling similarly.
We handed the slap bracelet back to Van #1 for the last time around 1:45am and headed directly to Exchange 30 (where we would eventually meet with Van #2).  At Exchange 30, we happily forked over $2 for the privilege of sleeping in our sleeping bags on the hard wood floors of the Basic High School (or as Amanda called it, the Ritz Basic)
After about 3 hours of sleep, I received word that Runner #6 (Matt) was starting his last leg, which meant that Van #2 third and final time to shine was nearing.  We woke up, freshened up slightly (I definitely prioritized sleep over hygiene) and headed outside.  Around 6:20am, Katie took off and we were on our way to checking off our 3rd legs! 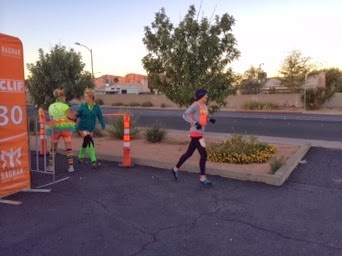 My 3rd leg was tough.  It was 7.6 miles and the whole thing was uphill.  And it was getting hot.

I started out the leg in shorts, a short sleeve, and a long sleeve (all lululemon, but that's kind of irrelevant).  I was so grateful when I saw the rest of my van hanging out near the 5 mile mark so I could shed the long sleeve.  If they hadn't been there, that last 2.6 miles would have been looooooooong.  I finally reached the end of the seemingly never-ending hill and there was Amanda waiting to do her 3rd leg, which would basically un-do the uphill work in 3 miles that I did in 7.6.

Amanda breezed through her leg and handed off to Noah who ran down towards Lake Mead and along the shore of Lake Mead until he handed off to my daddy.
Obviously, the girls were super pumped to be done with our legs.  All that was left for us to do was cheer on the remaining runners and then run across the finish line! 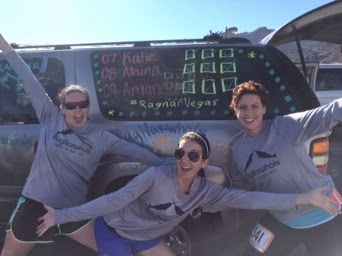 Just in case I haven't mentioned this about 700 times, our van was the bomb dot com (so much the bomb that I had to spell out "dot").  We were very good about taking pics, so the whole experience is well documented.  Basically, I'm telling you to blame my super photogenic teammates if you're sick of the pictures. 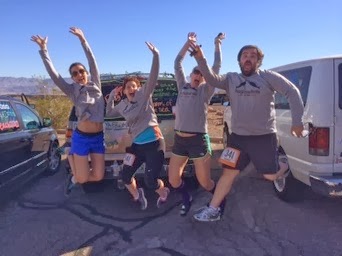 My van consisted of me, one of my co-workers, a friend from law school, a friend from previous work experience, an awesome friend of a friend (who is now my friend), and my daddy!  It was so fun to cheer on my daddy during his legs.
After Kyle took off on his last leg, the last leg of the entire relay, we headed towards the finish line.  We got there, hung out with the members of Van #1 until we saw the amazing Kyle heading towards us.  We were super pumped to fall in line beside him and head towards the glorious finish line along the banks of Lake Las Vegas. 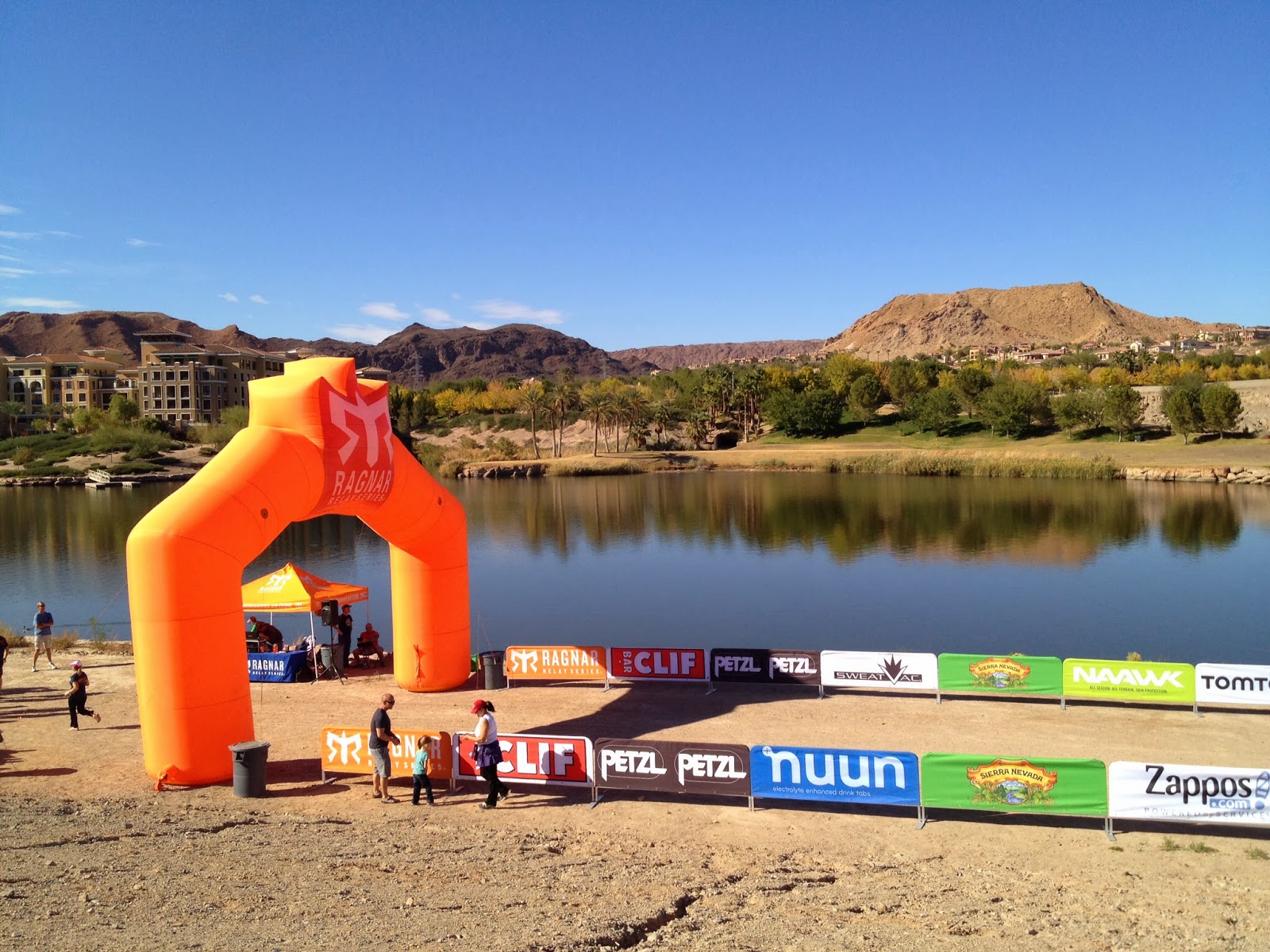 We finished in approximately 29 hours and 45 minutes and I can honestly tell you that every single one of those nearly 1800 minutes was an absolute blast.  We had a fantastic group of people that ran hard and cheered hard. 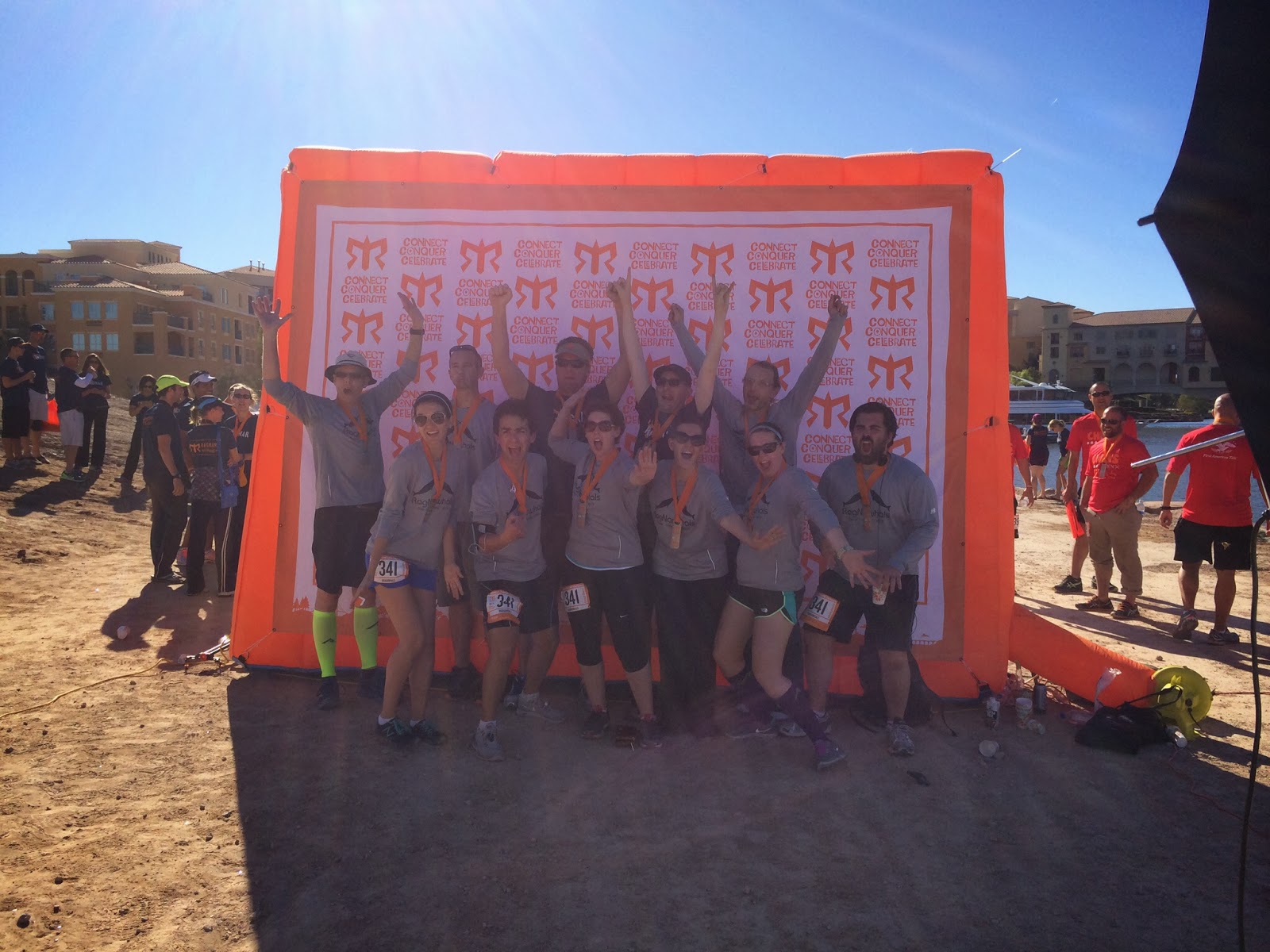 As much fun as it was, I was ready for some serious amounts of sleep.  And, as if having some of the best 30 hours ever wasn't enough, I got two super sweet medals out of the deal! 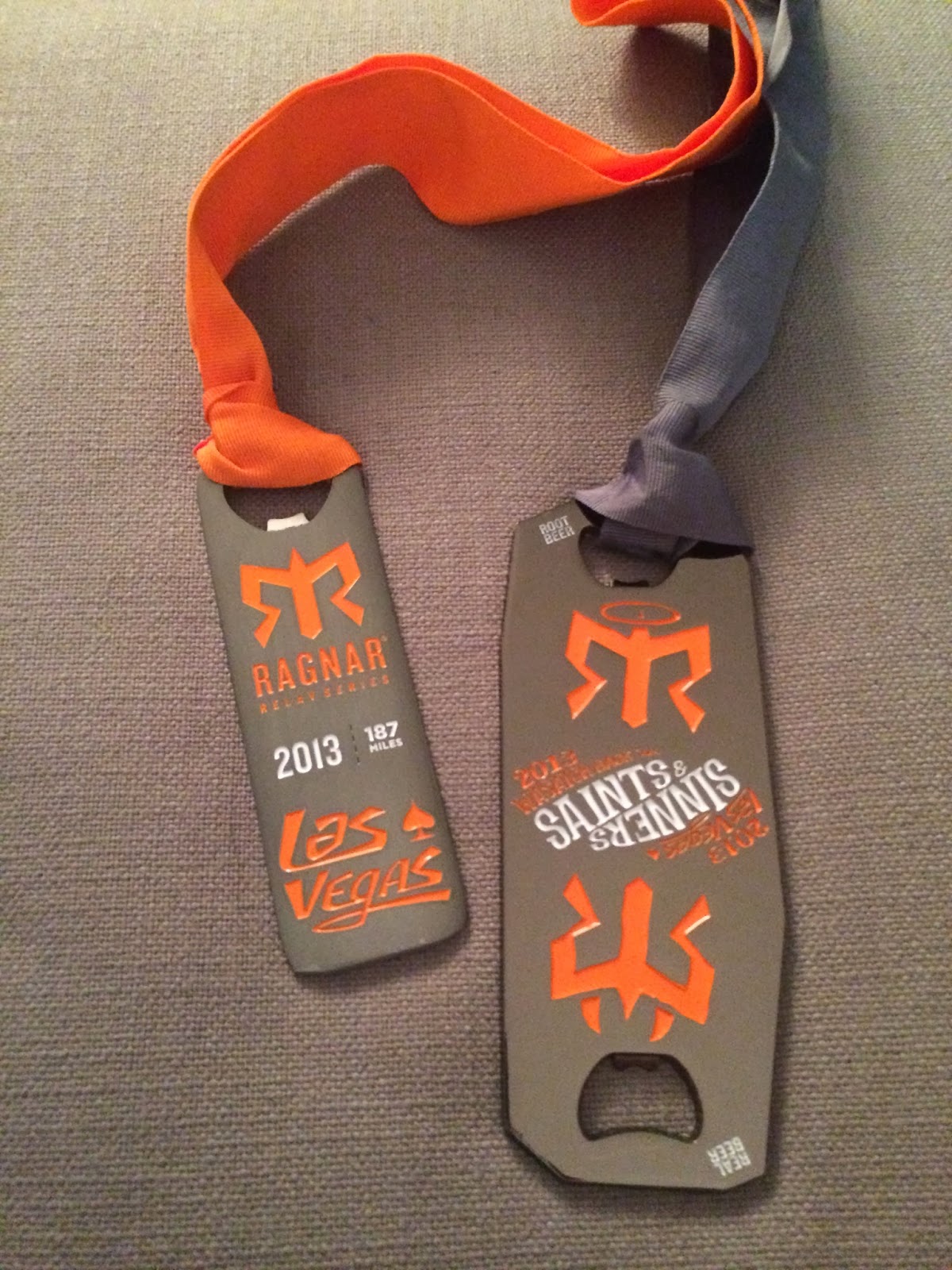 I got the larger medal for doing Ragnar Wasatch Back and Ragnar Las Vegas in the same calendar year.  It is the "Saints & Sinners" medal.  I especially love this because it has a bottle opener on both ends.

The sinners side is supposed to be used for "real beer." 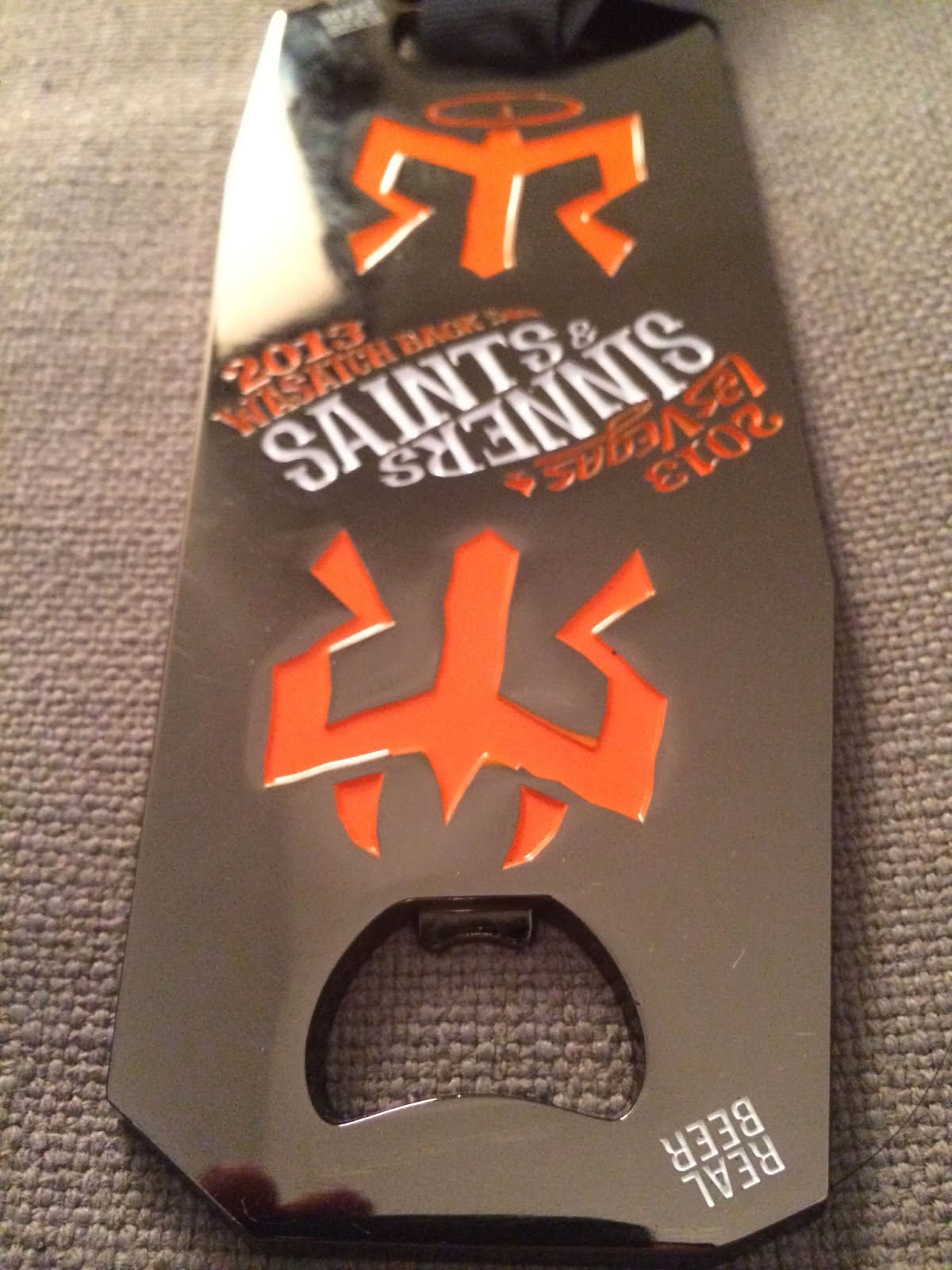 The "Saints" end of the medal indicates that it is for "root beer." 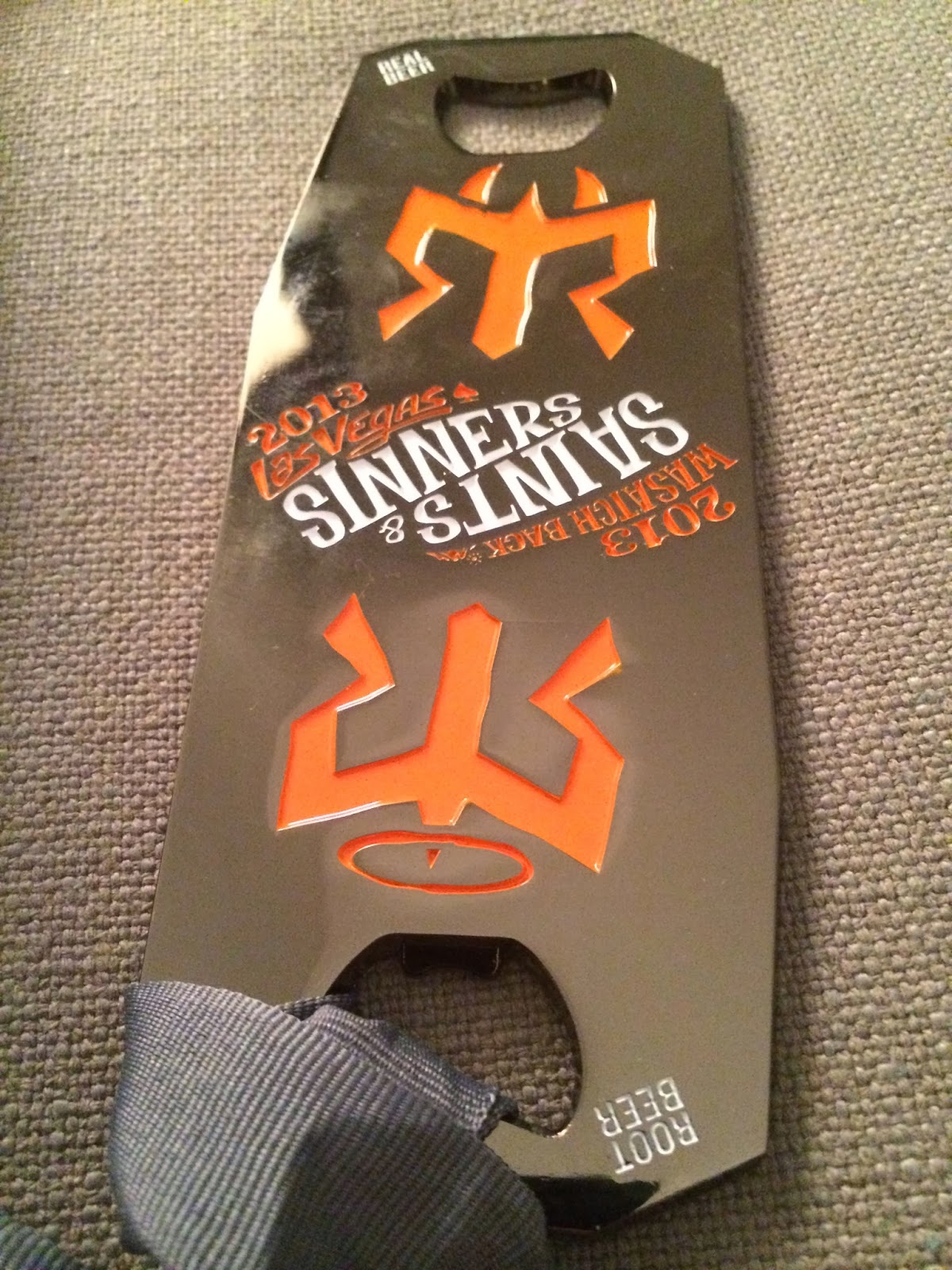 I'll let you guess which end I'll use more =)

Have you ever done a Ragnar or any other Relay?

How was your weekend?