Saying good-bye to Kona and welcoming the real world

Well, folks, it is almost time for me to move on with my life and stop invading your homes with my incessant talk of the paradise known as Hawaii.  I promise, this is the last post that is entirely dedicated to one of the best vacations we've ever taken.

After we got home from our awesome paddleboarding day, we were forced to face the music of our last day in paradise before returning to reality in the desert.  Fortunately, our flight didn't leave until late evening, so we had the whole day to take in a little more of the Big Island.

After checking out of the hotel, we took off toward Hilo (the biggest town on the east coast of the island) via Saddle Road.  Saddle Road gets its name because you climb up to the saddle between Mauna Kea, Hawaii's tallest peak and Muana Loa, Hawaii's second tallest peak.  We drove from approximately sea level to more than 9000 feet in elevation!

On the other side of the saddle, the scenery changed from the arid, tropical desert on the western side of the island to a lush, tropical rain forest on the eastern side.

Our first real stop of the day was the Kaumana Lava Tube.  To get down into the caves, you had to walk down these steep stairs into a sea of green foliage.

Once at the bottom of the stairs, you can choose to go to the left or the right; there are caverns of the lava tube in both directions.  We explored both, but went to the right first.  The right side is much more obvious, but trust me, there is another cave that is equally, if not more, fun to explore to the left.
However, flashlights or headlamps are key to enjoying this lava tube.  Unlike the Thurston Lava Tube in Volcanoes National Park, this lava tube is not lit and does not have a nice, neat, and even path carved out.  So, basically, watch your step....especially, if you my impressive level of coordination, you're likely to break an ankle.
After the lava tube, we moved on to see our first waterfall:  Rainbow Falls.  With the exception of Niagara Falls, of course, this was probably the most impressive and beautiful waterfall I've ever seen.  Everything was so green!  Being able to experience the beauty made it almost worth dealing with the rain all day.  I mean, they call it a RAIN forest for a reason....

There were so many possible waterfalls to enjoy along the way.  Unfortunately, it just wouldn't stop raining, so we didn't get out and enjoy all of the waterfalls, but we did enjoy one other fall that was around the corner from Rainbow Falls (I just can't remember the name....)

After the falls, we drove into Hilo to find some food...I was starting to get pretty hangry.  We decided to stop at Short n Sweet Bakery & Cafe.  One word:  AMAZING.  Seriously, if you go to Hilo, eat here and eat a lot. 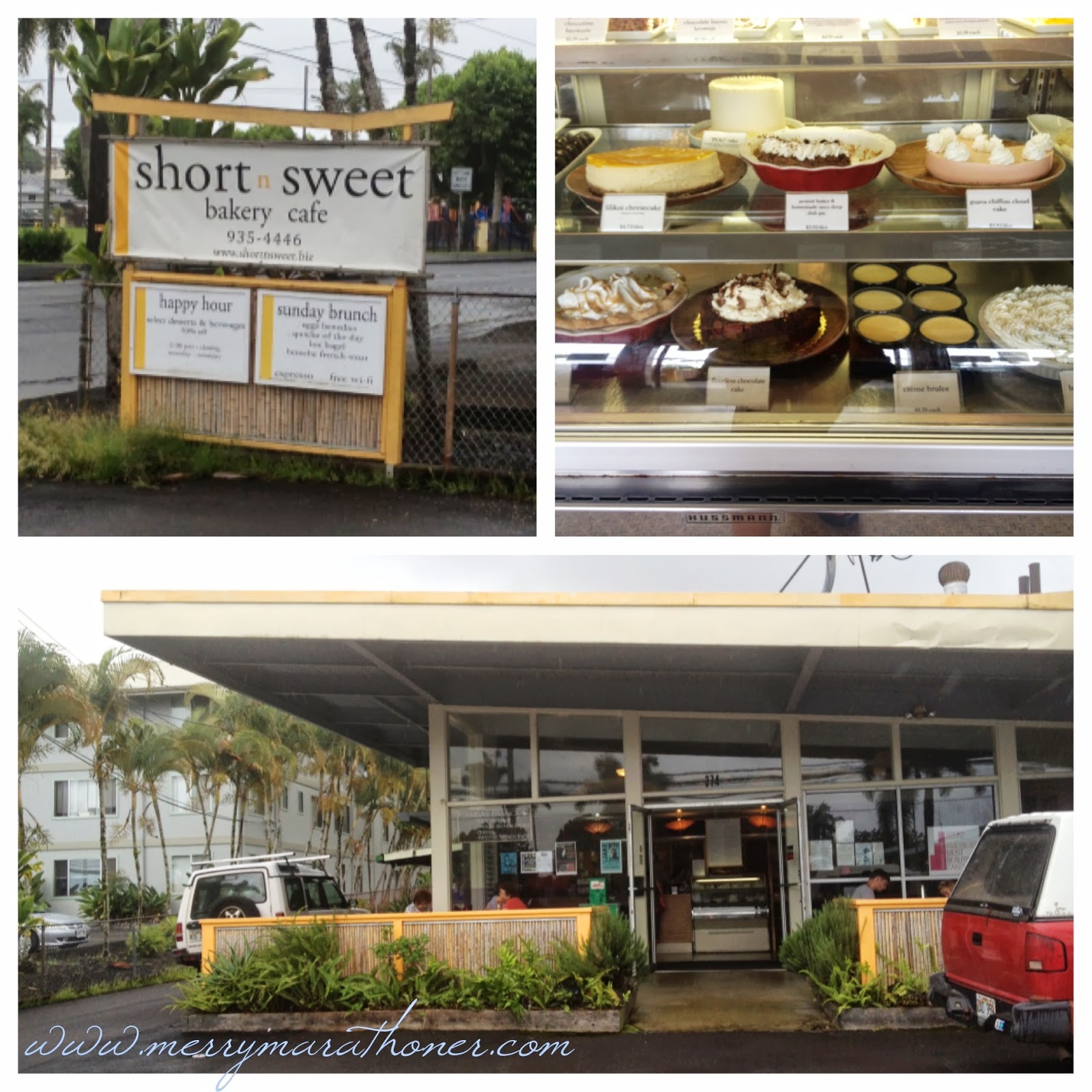 This place was legit.  Apparently, they're known for making beautiful cakes.  In fact, there was a sign indicating that apparently, Short n Sweet won an award in 2010 from Brides Magazine in the category of "America's Most Beautiful Cakes.  I ordered the Pesto panini on house made wheat ciabatta.  Mind blowing.

I also got a slice of the Passion Fruit Cheesecake (top left delicacy in the picture of the pastry display case) and a bacon fudge brownie (not shown, but rest assured, it was heavenly).

After lunch, we decided to drive around the north end of the island and head back to Kona and the airport.  It was beautiful scenery, but it rained the entire time until we reached Waimea and started heading back south.  I'm not going to lie, but by this time, all the rain and driving had made both of us pretty cranky.  However, we were quickly cheered by our discovery of the other-worldly Tropical Dreams Ice Cream.

Our moods were also improved when we saw this Double Rainbow (haha - have you seen that youtube video? or the auto-tuned version?)

After that, we drove straight back to Kona, filled up with gas at Costco, and went to the airport.  We had to say our final good-byes to rain forests, lava fields, waterfalls, fresh tropical food, and beaches with sand every color of the rainbow.
We flew from Kona to Honolulu and then, at 10:35pm Honolulu time, we boarded a giant plane to take us back to the mainland, or as the Hawaiians like to call Las Vegas, "the Ninth Island."  We arrived in Vegas around 7:30am in the morning and went home and slept allllllllll day.  It was glorious.  Around 9pm, we finally decided to venture out and get some dinner.  We decided to get burgers and the most delicious fries in the world at Strip Burger (zOMG delicious)!

That was our trip!  If I'm being completely honest, it is kind of nice to be back in my normal schedule.  Now it's time to go back to normal life and normal blogging!!

Are you a sorbet fan?  Or do you prefer the creamier types of ice cream?
(I'm normally not a huge fan of sorbets, but my mouth is literally watering for that pineapple sorbet.)