That day that we explored Hawaii and nearly died from exhaustion =)

It is Wednesday, and I've been forced to face the fact that my life no longer involves me and my husband chilling on beaches in Hawaii.  However, to ease myself back into the real world, I've been spending a lot of time reminiscing about our week in paradise.

Disclaimer:  These recap posts are going to be a bit long...but they mostly consist of beautiful pictures.  Feel free to scroll through, see the beautiful sites, and then plan a vacation that is exactly like ours because it was basically perfect.  I mean it, once you see these pictures, you're totally going to want to go to the Big Island and do everything that we did.

Trust me, our first day on the Big Island was *very* glamorous.  We landed in Kona around 8:30am.
Once we left the airport, we proceeded to hang out in the Costco parking lot until it opened at 10am.  After stocking up on the necessary provisions (Malibu, chocolate, and sunscreen), we headed to our hotel, the Hilton at Waikoloa Beach.  We were there waaaayyyyy before check-in and we were super grateful that they had a room available.  After spending the night on a plane, I definitely needed a nap...and, dang, it was an epic nap.

We finally convinced ourselves to get out of bed and explore the resort, grab some much needed food, and of course, we had to go for a little swim.  Before we knew it, the sun was setting.

With the time change, we ended up going to bed super early.  It actually worked out well because it enabled us to get up early the next morning and embark upon our first full day in Hawaii.  In fact, we pretty much woke up with the sun, mostly because of the time change, but also because our room was east-facing.  As we left, we headed south toward Kona and beyond.  We quickly realized that this island is HUGE!!

It really is such a beautiful island and I wanted to stop so many places.  However, because the island is so big, I had to prioritize.  So, we drove for a couple hours to a place near the very southern point of the island before we made our first stop.


My first observation about this end of the island:  Holy cow it was WINDY!!  The wind was so relentless, the trees literally grow to the side.  If you look closely, you'll see that those trees aren't just leaning in the wind.  The wind always blows westward, so the trees just grow leaning west.
Our objective in stopping here was the Papakolea Beach and its GREEN sand!  This is one of only four green sand beaches in the world!!  However, you can't get all the way to the beach in a 2-wheel drive vehicle.  There were a bunch of locals with four-wheel drive vehicles that would drive you the 2+ miles to the beach for a small fee.  However, we're cheap awesome, so we decided to do the ~4.5 mile round-trip hike.

We even had the opportunity to do some minor scrambling down to the beach! 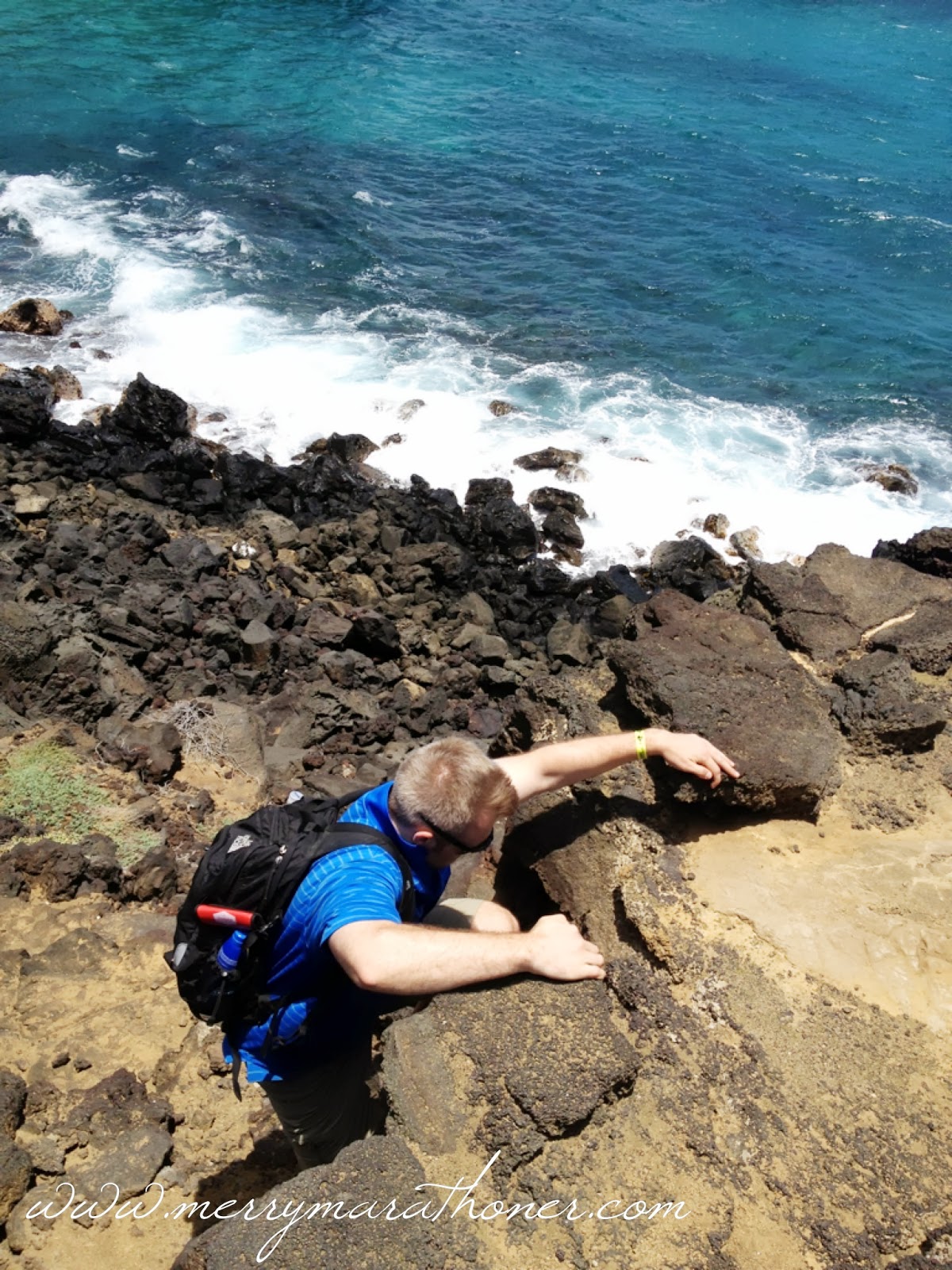 Even though the entire hike to the beach is completely into the wind, the hike was lovely and the destination was totally worth it!

The sand was so uniquely green.  Geology Lesson:  Apparently, the green sand comes from erosion by the ocean of a stronghold of olivet mineral that is underwater as a result of volcanic eruptions.  Eventually, the ocean erodes the underwater rocks and the crystalline olivet dust ends up on the beach and, voila, you have a green sand beach!

I had to really resist the temptation to take a sample of this amazing sand home; the olivet mineral is in limited supply and the green hue of this beach will probably eventually disappear.

On our way back, we found another random patch of the green sand that was even more green than at the beach.

This area was almost as cool as the actual beach!  Adam was checking out one of the tide pools and found his new friend, the hermit crab.  The thing was crawling all over Adam's hand and arm.  It would have freaked me out.  Of course, he put it back where he found it before we continued our hike back to the car.

After we got back to our car, we continued around the southern end of the island to the east coast of the island.  We took a quick lunch break before heading to the Punaluu Black Sand Beach.  The black sand was bizarre and beautiful and surprisingly soft. 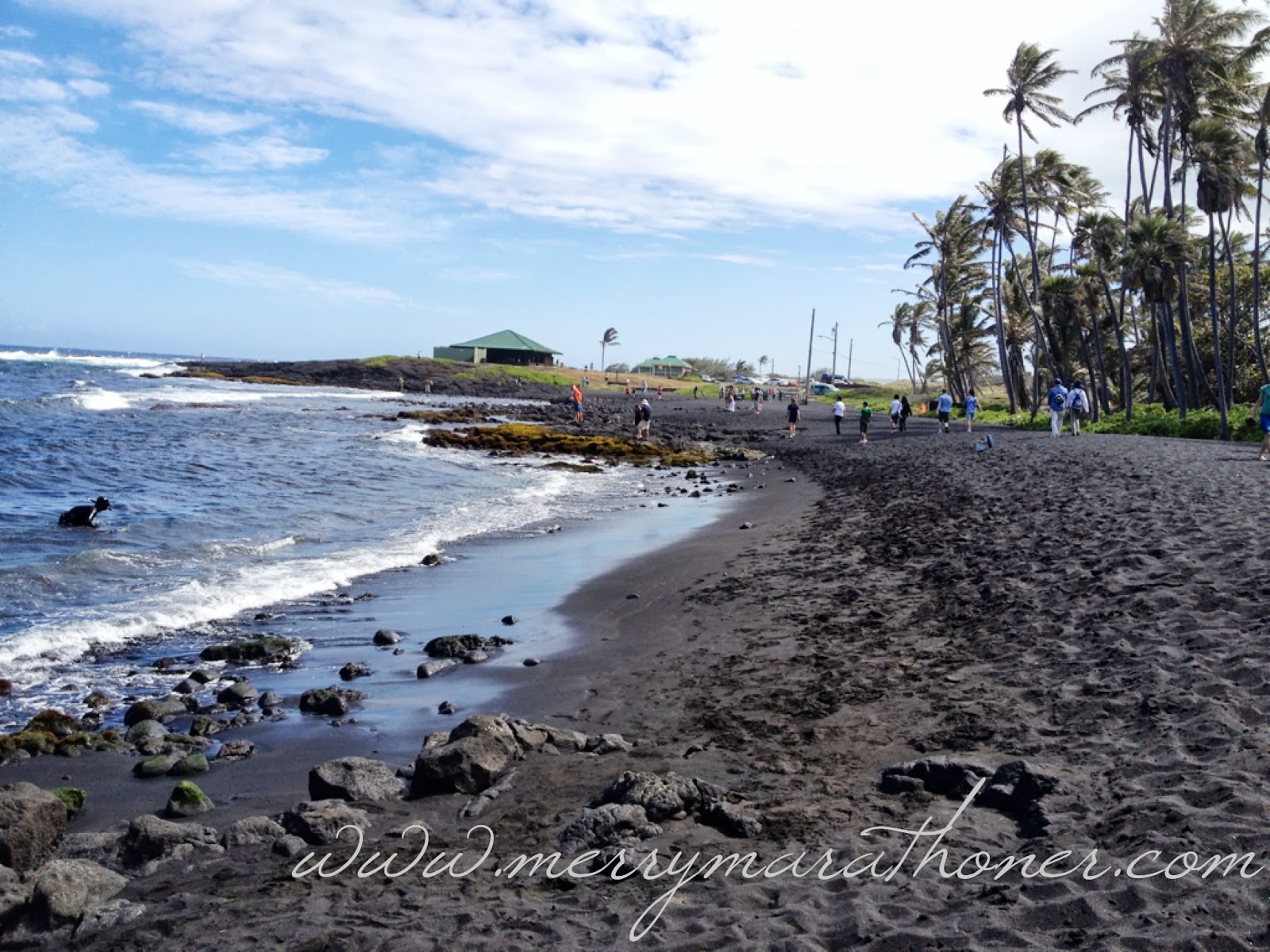 We also were thrilled to find two sea turtles feeding on algae in a large tide pool.  If I'm being honest, Adam realized that the first turtle shell was more than just a rock.  That being said, I was the one that realized there were actually two turtles.  It was an incredible experience being so close to them.

After I pried myself away from the turtles, we washed off the remaining dirt from the Green Sand Beach hike, and headed to the car.
Our last major stop was the Hawaii Volcanoes National Park.  One of the volcanoes, Kilauea, has been pretty much continuously erupting since before I was born!!  Sometimes the lava flows on the surface of the land, but a lot of times, the lave is actually flowing towards the sea underground.  I'm going to convey my disappointment up front that we didn't get to see any flowing lava =(  We did, however, get to see the smoking crater.

Another cool phenomenon in the park were the Steam Vents

These steam vents occur when water seeps into the ground and, underground, the lava has heated the environment to the point that this water escapes as steam.  It is incredible.  When you get close to a vent, it feels like a steam window.

Our last stop in the park was the Thurston Lava Tube.

Basically, a lava tube is the underground plumbing of an eruption.  The lava flows underground and, sometimes, the outsides of this flow will cool and harden, creating a ceiling and walls, while the lava inside continues to flow/drain.  Once the eruption is completed and the rock cools, you're left with these cave like channels.

The whole day was beautiful.  I really enjoyed walking on beaches and through rainforests. 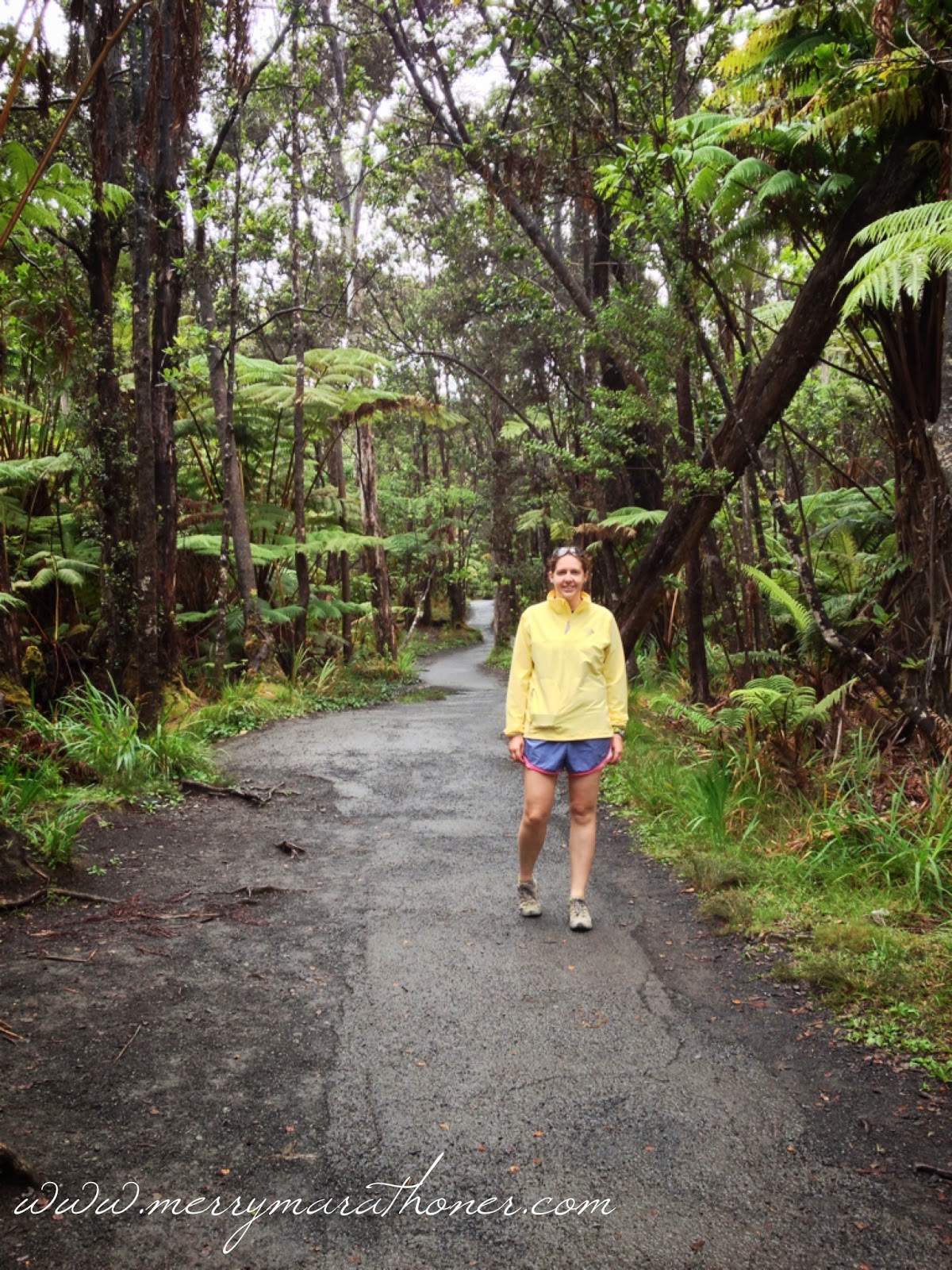 Eventually, we went in desperate search of sustenance.  I decided to try a local favorite: a pork Loco Moco.

Two scoops of white sticky rice topped with pulled pork, brown gravy and two fried eggs.  I wouldn't say it was delicious.  It wasn't bad either.  It was interesting.  I think this would be MUCH more delicious if it had the white, country gravy that comes with biscuits and gravy, rather than brown gravy.  Maybe I'll make it that way myself sometime.  Sounds healthy, no? ;-)

By the time we finished eating, it was after 9pm.  However, because our bodies hadn't adjusted to the time change, it felt WAAAYYY later.  We had a looooooooong and windy drive back to the West Coast of the Island and our hotel.  I'd rather not relive the night.  We were both exhausted.  Staying awake was a struggle.

Would you try a Loco Moco?