I've mentioned a few times how disappointed and unhappy I am with the way the weather is behaving in Las Vegas. I mean, I get it Las Vegas...you're a desert. No need to show off, have a temper tantrum or whatever you call this scorching behavior. Message received. I promise not to complain about 107 anymore.

Thursday, my co-worker and I went to eat salad bar at Whole Foods.  Apparently, I love spending $16 on salad (and my husband thinks that I spend too much money at Jason's Deli...). But, you see, there isn't a Yogurtland in the parking lot of Jason's Deli.  Therefore, I must go to whole foods due to its proximity to frozen, creamy heaven in a paper bowl. 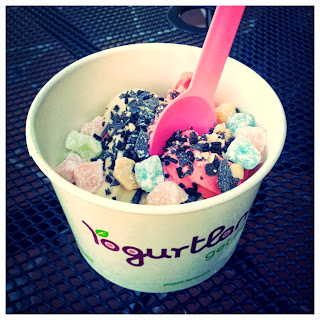 It was so hot, that my rate of eating the frozen yogurt couldn't keep up with the rate of melting. That's ok.  I like mochi and heath bar soup in a red velvet and root beer float flavored creamy broth.

I'm so glad that I'm escaping to Chicago this weekend. I mean, I don't even care that it might rain most of the weekend. It will literally be 30 degrees cooler. No joke

So, today, Las Vegas really impressed me with its misbehaving weather. American Airlines had to ask like a dozen people to take a later flight in exchange for a $500 travel voucher.  This request was not as a result of over-booking the flight. No. This request was because it was literally so hot in Vegas that the plane wouldn't be able to get enough lift if the plane was full. That's right. It is so hot in Vegas, airplanes basically don't work right.

Have I mentioned how glad I am to be in Chicago?

Email ThisBlogThis!Share to TwitterShare to FacebookShare to Pinterest
Labels: Chicago, Hot as Hell