This was the weekend of my first Ragnar Adventure!!

I can't fully describe the ups and downs of this weekend, but I'm going to try anyway.  But, by way of preview:  there were moments of laughter; moments of team unity; moments of teeth-chattering cold; moments of triumph; and many, many moments of sleep deprivation.

I met up with the other 5 members of my team that were in my van (Van #2) at my work parking lot and were on the road to Logan, Utah.  I don't think I really comprehended how far away the start line for this Ragnar was from Las Vegas; it was an 8 hour drive.  That being said it was actually a very pleasant drive and not just because I didn't have to drive at all, but also because we stopped at one of my favorite spots for lunch:
Once we finally arrived in Logan, we settled in at a house that belongs to one of my teammate's relatives.  So awesome that we didn't have to stay further away or splurge on hotel rooms!  Plus, I made a friend of the only occupant that was home during our stay:
After briefly settling in we headed over to Olive Garden to carb up because we had some taxing days in front of us (dang, I really love carbs).  Then it was off to bed...our start time was 5:45am the next morning!

Day #2 - Friday - Ragnar Start Day
I had a 5am alarm so I could take a super quick shower (knowing that it could be awhile before I had another chance to shower) before we headed to the start line at Utah State to send off our first runner.  Even though it was crazy early, we got to see the sun rise over the mountains and it was phenomenal. 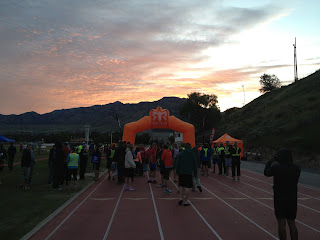 Now, let me start by saying how glad I am that I was in Van #2. By being in Van #2, all I had to do was show up at the start line to cheer on our first runner and then head over to Village Inn for a delicious breakfast (i.e., more carbs).
After breakfast we drove to Exchange #6 where we had our safety briefing and waited for van #1 to arrive.  It was so exciting when we finally saw runner #6 coming down the road.  He slapped the slap bracelet on MC's wrist and she was off.  We hurried off to the van to chase after her, drive a little past her, then jump out of the van and shake cow bells, jump in the air like crazy people, and cheer her on.  It was more of the same with runners #8 and #9.  Before I knew it, it was my turn!  Scott/Steve slapped the bracelet on my wrist and I was off, running down a beautiful Utah country road. 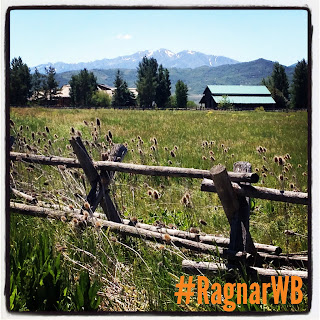 The first mile flew by (9:18), but after that I turned and was running in to a *very* strong wind.  At about 2.5 miles, my shoe came completely untied! That NEVER happens to me.  I blame the wind.  Finally, at 3.7 miles, I rounded one final curve and I could see the exchange zone and my teammate #11/GS was there waiting to take off on a 7.3 mile, mostly uphill, run!
Once #11/GS handed off, #12/DC went off for a super quick 2-mile jaunt on a trail run at Snow Basin Ski Resort.  He was back in a cool 18:39 and we had some time to recuperate while Van #1 was doing their thing.

We drove over to Exchange #16 where we had the opportunity to sleep in our sleeping bags on the lawn outside a high school.  I got about 1 hour of sleep (not enough) before it was time to head over to Exchange #18 and wait for Van #1.  It was starting to get dark and it looked like I would be running my next leg in the wee hours of the morning.
Day #3 - Saturday - Ragnar Finish Day
My next leg was a 7.5 mile run on a gravel path with just a slight, steady incline.  I started running at the fantastic hour of 12:55am.  When running a night leg in Ragnar, you're required to wear a reflective safety vest, a headlamp, and a blinking tail light.  I really wish I had a pic of it because I looked like a certified crossing guard.  Even though I had a headlamp, I was really nervous about running in the dark on this gravel path because I am super clumsy and there seemed to be a substantial risk that I would misplace my foot and break an ankle.  This fear kept my pace pretty slow, but I survived the 7.5 mile run without breaking any bones and handed the slap bracelet off to #11/GS once again.

I neglected to mention that, when I started running, it was 43 degrees when I started my 1 am stroll through the Utah wilderness?  Well, it was...and that temperature plus the sweat involved in running 7.5 miles made me a shivering, chattering mess.  I seriously thought I would never be warm again!

The next few hours are sort of a blur of chattering and sleeping.  I seriously have no idea what we did between the time when #12/DC completed his leg and the time shortly before MC took off for her final leg!  At this point I was getting super nervous for RAGNAR HILL, i.e., 4 miles straight up 1700 ft in elevation.  But, before I knew it, my final leg was upon me.....and it was wonderful!!  It was a challenge, and it was the slowest 4 miles I've ever run/walked (outside of leisurely hiking), and I enjoyed every single second of it.  Once I reached the top of the hill, I realized that my Ragnar adventure was quickly coming to a close. =(

I'm so impressed if you're still reading this.  I told you, the last few hours of the adventure was a complete blur which meant I wasn't the best at taking pictures.

At approximately 3:35 pm MST, we crossed the finish line at Park City High School and I officially became a Ragthlete? a Ragnite?  a Ragnarian?  Well, I became whatever you call a person that completed a Ragnar Relay without going completely insane from lack of sleep and lack of showering. 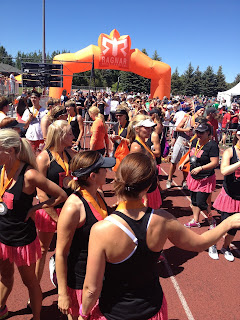 I'm definitely already ready to sign up for Ragnar Las Vegas.  Who wants to join me?